A Reflection on the Evolving Image of God 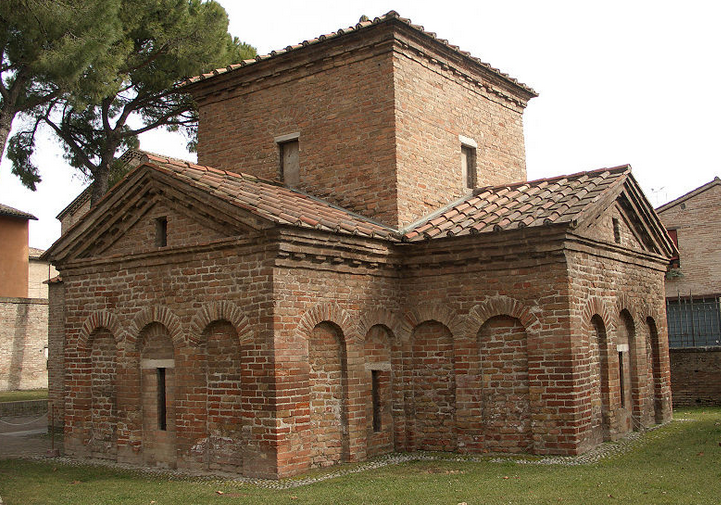 One morning in Ravenna, Italy, our tour guide gave us, in a rather bantering tone, a warning: ‘Today, until eight o’clock this evening, we are going to spend all our time looking at images of God. Count how many we see, and there will a little test before dinner.’

Before Ravenna, if I thought of an image of God, it would probably have been an older man up in the sky, probably  like Michelangelo’s fresco of God the Creator in the Sistine Chapel. Evidently, we were in for a surprise.

Images of God can be controversial and creating them can be no light matter. It was rather daring of Christianity to encourage artists to create images of God at all. The first commandment forbids all forms of idolatry or the setting up of graven images. Judaism, from which Christianity springs, strongly discourages representations of God, although an image of the hand of God coming out of the sky is known in Jewish art. Indeed, the hand of God was one of the first images we saw. Also, there was a fish in an abstract form, often used during the period in which Christianity was illegal, and the Chi-Rho symbol referring to the Greek initials of Christ, ‘J-C’, and most famously used on Constantine’s battle standard during his struggle to become Roman Emperor. 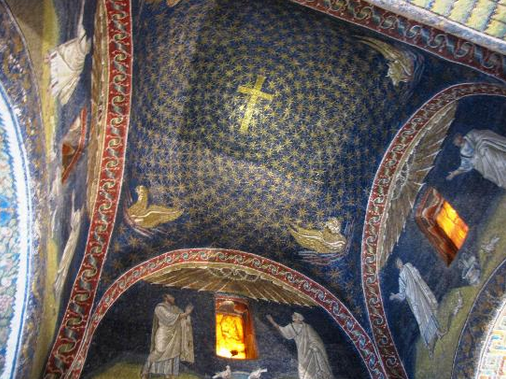 After the legalisation of Christianity in 313 AD, the need to hide was over. Richer and better-off people began to join the Church. For example, in 425 AD, a very rich woman, Galla Placidia, commissioned the building of a mausoleum (pictured atop this page) in Ravenna close to the major church of San Vitale, richly decorated in glittering mosaics. Inside, on the ceiling, the Deity is portrayed (above) as a giant gold Cross blazing out of the starry firmament. God had displaced the pagan constellations. Above the doorway was a young Christ (below), portrayed as a good shepherd, looking after his flock in the fields. 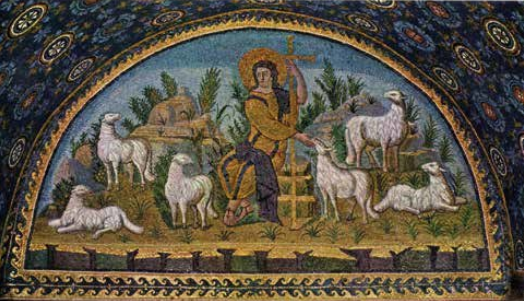 In the basilica of San Vitale, there are even more Divine images. On the ceiling of a chapel finished in 547, during the reign of Justinian, there is the Lamb with a halo, symbol of the real presence of God. In a vault, enthroned on a globe of the Earth, one sees Christ Pantocrator, the ruler of the world, glorious and all-powerful at the second coming. However, there are no images of the crucifixion in any churches of that period in Ravenna. Our guide told us that images of Christ’s suffering generally date from the time of St Francis of Assisi (1181-1262). On the arches of the vault are peacocks, whose flesh, it was thought, remained incorruptible after death, thus being another symbol of divinity. On a wall panel, the hand of God intervenes at the moment Abraham is about to sacrifice his son (below); on another, Moses is standing before the the burning bush, from which came the voice of God. 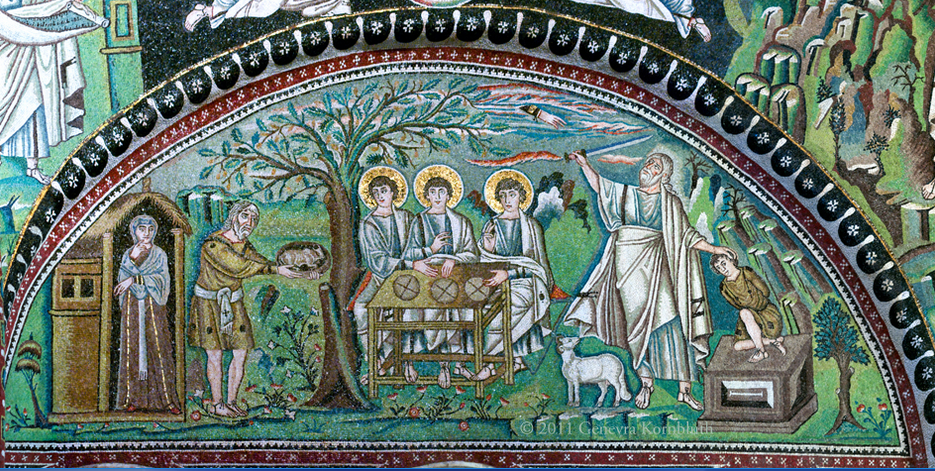 That evening, as promised, there was a test. We had seen nine different images of God, but not a single one of an older man. The image of God as a father figure appeared, it seems, at first in some illustrated French books in the thirteenth century and later in Renaissance churches. This representation and its derivatives, resembling no-one as much as Zeus, king of the Greek gods on Olympus, became firmly rooted in the Western mind. Nevertheless, the Catholic church permitted and encouraged artists to use techniques of perspective and realism to show the drama and reality of the biblical stories.

In contrast, the Orthodox church remained more conservative. Its images kept a more obviously idealised and divine form. Too much realism, it may have been feared, could diminish the importance the change wrought by the Resurrection, the moment of victory over death when the salvation of humanity was achieved, and when Christ’s kingdom was inaugurated, not simply the atonement of sins.

Today, the image of God like Zeus can be an easy target for atheists — someone supposed to be up in the sky but shown to be quite absent thanks to modern astronomy. Such an image is quite at odds with the long-held Christian notion of God who exists outside space and time, always present but beyond our immediate perception.

Well, let it never be said that the Western church was afraid to run risks, and from which the arts undoubtedly benefitted.

Let Us Raise an Army of Leaks