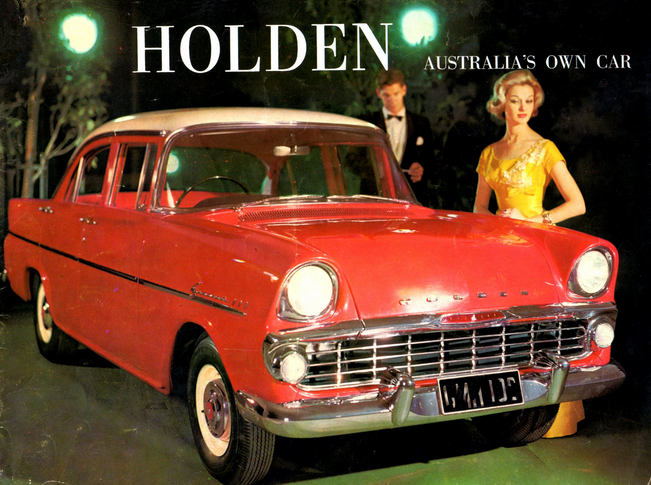 My first car in Australia was a clapped-out Ford Zephyr which died very quickly and which I had to have towed away for scrap as no dealer would accept it as a trade-in. My second car was an FB Holden Ute which, although tired too, served me well in Sydney once I’d had the rusted floors replaced by a welder, and took me up to Townsville and eventually via Katherine and Broome to Perth, when, to put it mildly, the roads were not so well made as now for much of the journey.

So, my Holden served me well, though I never bought another. What I did buy however was always made in Australia – by Ford, Toyota or Mitsubishi. Now, as we know, they have all gone, even the lingering notional existence of Holden. But that’s fine. Free trade, so-called, means that we must import all of our cars. Far cheaper than making them here and that’s all that counts in this brave new world.

I heard an economist of one of the major consulting firms the other day explaining that the effect of low interest rates in boosting housing prices would make people feel wealthier and more inclined to spend money on durable goods and cars, and thus boost the economy. Which economy, I thought, because none of those durable goods or cars would be made here. Perhaps the economy he was referring to belonged to China or to some other country or countries.

Of course, consumer spending benefits shareholders of Harvey Norman et al and owners of various car dealerships as it does their employees. But the benefits are very limited. By the way, in their naivety, most economists are singularly oblivious to this reality.

They look at the national accounts and believe consumption expenditure to be the major contributor to economic growth. In fact, it is largely offset by imports. Their naivety is the product of being misled for eighty-plus years by Maynard Keynes. The production side of the national accounts is where economists should be looking; not the spending side. As they don’t, they are, for the most part, a waste of space.

I will put it plainly for the edification of economists of Keynesian persuasion (i.e., most of them). Making a car adds to our wealth. Buying a car does not.

Sadly, and inexplicably, in my view, we don’t make cars anymore. Nor do we any longer make electrical goods or not many; nor clothes or, again, not many of them. We have outsourced most of our manufacturing and all of the great variety of skills it entails, and all the small businesses it supports, and all the richness it brings to our national culture. And if you think that is a good thing you are no doubt one of those libertarian types who believe in “free trade” whatever the cost to national life. Cheap stuff is apparently the sine qua non of our existence.

Leaving his foreign correspondent turf, Greg Sheridan recently wrote a fantastic article in The Australian (20 Feb) on the loss of car manufacturing in Australia. If you haven’t read it you should. “This disaster,” he writes, “was brought about by a combination of green costs on industry, ludicrous power prices and grievously misplaced free-market economic nostrums. The net result was a catastrophic loss of capacity, complexity and competence across our economy, a dumbing-down of society, a needless limitation on our potential and a serious dent in our national security.”

On the usual cant of our market being too small, Sheridan argues that “our market is augmented by five million New Zealanders … Thus with a wealthy domestic market of 31 million, and next door to the fastest growing economies in the world in Asia, if we decide not to have a manufacturing industry that is not because of external circumstances, but a conscious choice born of lack of ambition and lack of will.”

The only thing I would add to Sheridan’s account is that the interplay of bloody-minded unions and compliant “empty suits” (and the resultingly flawed enterprise agreements) didn’t help sustain the industry. But that, too, should have presented a challenge to government, not a further excuse for letting the industry die.

Skip across the Pacific and listen to Tucker Carlson on Fox News (21 Feb) talking about the American malaise. He goes beyond Sheridan’s remit but, when you think about it, it is all part of the same tapestry of decadence afflicting the West:

The people in charge inherited an economic superpower with unchallenged military dominance. In a little more than a generation they squandered all of it. In exchange for short-term profits, vacation homes, and cheaper household help, they wrecked what they did not build. They outsourced entire sectors of our economy to China. They imported a serf class to drive down wages and they crippled the middle-class while doing it…They turned the finest universities in the world into a joke. They watched from their little bubbles of affluence as families, faith, and public decency died in this country.

The common thread, whether from the transnationals on the right or Marxist globalists on the left, is disdain for the integrity of the nation state and for what binds it together — sovereign territory, strong borders, a common rule of law, common values and customs, shared history and traditions. Economic diversity and complexity are part of that. A nation does not have to be self-sufficient in the normal course. In fact, it must take advantage of trade. At the same time, it must have an abundance and range of skills and talents and the capacity to fend for itself in extremis. Having no manufacturing capacity is a national death wish.

Of course, international trade is good. It is essential. It makes nations more prosperous. But it is a means not an end. And trade deals should be put into that perspective. The end for any individual nation is to sustain a free, secure and prosperous population made up of many communities each having the opportunity to flourish. Industrial wastelands, occupational uniformity, and dependency on potential enemies for essential supplies is not a good bargain in order to get cheap stuff.