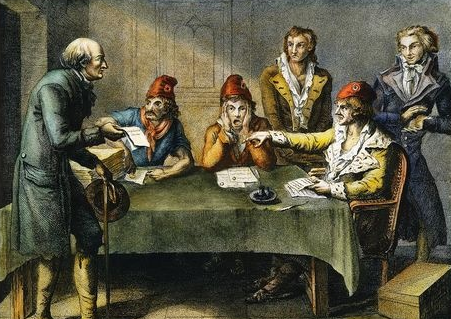 A month ago, prayer was criminalised in Australia. If you now venture into a church, mosque, synagogue or temple, then privately kneel and meditate or pray, you are breaking the law.  The police are under orders to stop any individual trying to pray privately in a place of worship.  In Victoria, my own state, Premier Daniel Andrews has introduced a hefty $1600 fine for this “offence”; and repeat “offenders” who persist in sneaking into sacred places to pray alone may be imprisoned.  Those in charge of the church, mosque, synagogue or temple will also receive a sizable fine for letting anyone in, and may have their place of worship forced out of existence.

This is justified by a viral apocalypse which, in early March, was confidently predicted to be poised to exterminate human life across our continent.  Suburbanised Australian cities don’t have the heavy population density of megacities overseas, but ‘experts’ have kept insisting the virus will spread exactly as in European and Asian metropolises. 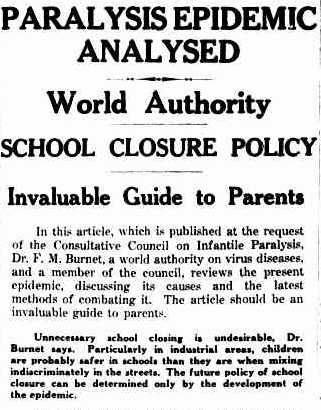 Assorted virulent diseases swept through Australia in the last century, many nastier and much more infectious than the Wuhan virus.  Going through old newspapers — The Argus of September 1937 (right), for instance — none of the sensationalist panic of recent weeks occurred on those occasions.  Schools closed for a time, and people were careful about hygiene, keeping their distance from others, but there were no draconian laws.

My own parents and grandparents lived through epidemics of diphtheria, poliomyelitis, and various strains of typhus and influenza.  Accepting periodic disease, people got on with life.  Businesses were not compelled to close, nor did governments fine individuals who went outdoors, let alone use police to harass communities.  While masks were required by law at the height of the Spanish flu, things were generally done voluntarily.

I’m one of those who had measles, mumps, chicken pox and other diseases during the course of my childhood, even pneumonia.  They were quite serious, but considered routine.  We picked up in our schoolground childish rhymes about several of these illnesses, some dating from historic times (anyone remember “A’tissue, a’tissue, all fall down!”).  Later, tuberculosis was detected within a class at my high school, and a government medical team promptly appeared and screened every youngster and staff member in the place.  A couple of students and their siblings were sent to hospital for treatment, although the rest of us were inoculated without any fuss.  It was handled calmly, efficiently and professionally, making quite a contrast to the current disgraceful panic-mongering by political leaders and journalists.

As for the aforementioned prohibition on private prayer in sacred places, this is among a lengthy list of activities newly criminalised by state governments using the famed Robespierre excuse, ‘Public Safety’.  These solitary practices are said to risk countless lives in the broader community.  So all citizens have been ordered to imprison themselves at home to prevent infection spreading, even if they have a clean bill of health.  Yes, the voters have been ordered, as it’s they who serve the Prime Minister and state premiers!

Formerly, many Australian citizens went fishing alone regularly, sitting in contemplative solitude in a tinny or standing beside a river for an afternoon.  This has now been outlawed as another threat to ‘Public Safety’.  Likewise many residents of cramped suburban flats made a habit of going to a nearby park and just sitting alone on a bench for an hour or so enjoying the fresh air and contact with nature, maybe reading a book, or throwing breadcrumbs to sparrows.  Again, it’s outlawed because of ‘Public Safety’.

A friend came to this country from the former Czechoslovakia.  Things were grim there, especially when Stalin ruled the Kremlin.  But never in the worst days of the Cold War did the government of that Soviet satellite dare to criminalise privately praying in a church, quietly dangling a fishing line in a creek, or feeding birds in parkland.

Even driving alone in your car is outlawed here if you are neither going shopping nor shuttling between work and home.  Any other use of the roadways is technically illegal (again Robespierre’s ‘Public Safety’ pretext is invoked).  All my neighbours have been issued with documents by their employers to show to police if stopped when driving.  I don’t have this paperwork: so if, seeking a change of scenery, I take a leisurely drive in my car I risk being fined.  Because in my solitary drive I may infect scores of people through the car’s closed doors and windows.

It doesn’t matter if one doesn’t have the virus, because the new laws treat each individual as automatically infectious.  This is surely an updated version of the notorious Code Napoléon with its de facto presumption of guilt.  Students of history will also notice that the federal and state parliaments are now running under Oliver Cromwell-style ‘temporary’ regulations.  Premiers rush through emergency laws without due parliamentary scrutiny and debate; because parliaments have abandoned customary procedures, with the leader of each government ruling like an autocrat for much of each week.  Copying the reasoning of Cromwell—that self-appointed ‘Lord Protector’—this is justified by insisting a national crisis is underway, and undemocratic methods are needed to ‘protect’ the people.

To my mind the greater problem here is how the Fourth Estate supports such hasty, ill-considered laws.  I used to write a column for The Age, and I well remember a senior editor once saying the sacred duty of our media is to police governments and keep them honest.  Those principles have been binned by the mainstream media.  Instead, most journalists parrot the Robespierre excuse, stoking public paranoia while affirming every dubious ruling by state premiers as needed to ensure ‘Public Safety’.  Is this the same Australian media that until two months ago noisily debated the wisdom of any and every decision by government?  That troublesome Fourth Estate has become a fawning cheer squad.

Just look at the Seven television network which has even devised an agitprop campaign.  On each of its TV stations throughout the day nauseating advertisements appear where grinning celebrities declare “we’re all in this together”.  Oh yeah?

Worst in my view is the National Broadcaster, which always paints itself as a defender of liberty.  Far from querying, let alone challenging the new laws hastily introduced across Australia, the ABC supports all the restrictions and accompanying use of police to harass the citizenry.  Lead by its health expert, Dr Norman Swan, certain ABC journalists even argue Marat-like that the heavy-handed laws should have been brought in earlier, and don’t go far enough. Is this the same ABC that boldly used to take on Joh Bjelke-Petersen, the then-premier of Queensland, for misusing the police?

Why aren’t journalists reviewing those infection figures the government’s experts have put out daily, pointing out the modelling is proving so wrong?  Hospitals were meant by now to be swamped with the dying, but over April emergency departments have experienced a national decline in patients presenting for treatment—and that’s for all medical problems, not the Wuhan virus.  The arithmetic has shown itself as flawed, medical science having forecast vastly more cases than has eventuated.

Meanwhile there is a mental health disaster taking place which is all over Facebook and starting to be alluded to on some radio stations.  Less than 7000 Australians have contracted the Wuhan virus; but hundreds of thousands are suffering in a mental health crisis of national dimensions.  Depression is spiralling.  An unknown multitude has been forced out-of-work, many people are either unlikely to get their jobs back, or have seen their businesses fold.  They are loosing hope—with just cause.  The new laws have also made their homes into effective prisons.  No wonder there are gestures of despair and cries for help all over social media.  Couples are quarrelling: domestic violence is said to have rocketed.  Telephone counselling services are jammed: getting on to Life Line has become a game of roulette.

So why isn’t the mainstream media agitating state and federal governments about the soaring mental health crisis engineered by the ill-considered restrictions?

Anzac Day falls next weekend.  My grandfather served at Gallipoli.  So did one of his brothers, and two cousins.  They and other siblings joined up because they wanted to protect freedom.  My grandfather also served on the Western Front, where he won a medal for “bravery in the field”.  Later he was gassed at Ypres, which permanently affected his lungs.

My grandfather would be horrified at what has taken place in Australia these last months.  This is not what he sacrificed his health for.  He did not get gassed so that praying in church, quietly fishing in a pond, or feeding sparrows in parkland would be outlawed.

Anzac Day?  This year its going to be a charade.  We’ve already been informed public services are ruled out.  People must not go or gather at local war memorials in remembrance.  Yes, praying for our dead at any war memorial on Anzac Day is likewise to be criminalised.

Lest we forget?  Hindenburg, Ludendorff and Wilhelm II will together be gleefully chuckling.  It took 102 years, but we now are losing out in that long war to protect our sacred freedoms.

Australia’s Future and Its Enemies