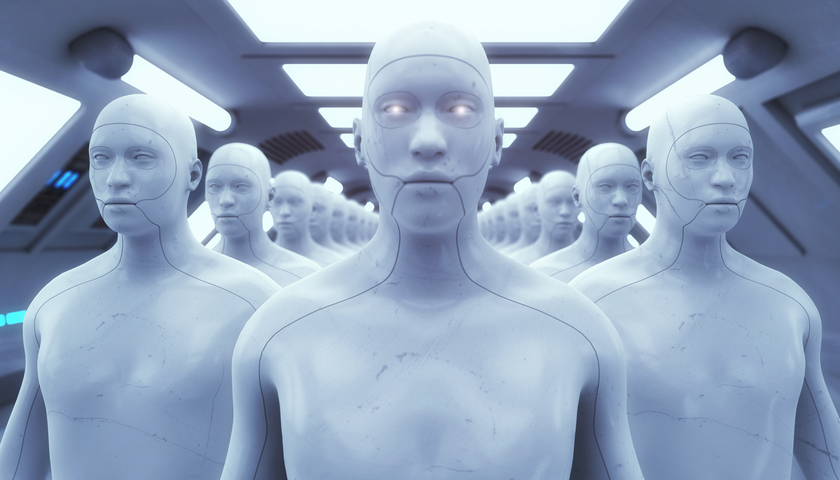 Screeching and cancelling they lay waste to our powers.

Nicole Kidman and Daniel Craig played in the last version of Invasion of the Body Snatchers, the plot changed somewhat and re-titled as The Invasion. I thought it was pretty good, though the critics weren’t too impressed. I know I’ve seen the immediately earlier version and maybe the one before that, and think I have read the book. I can’t rightly remember. Alien pods float to earth and begin converting into those whose actual bodies disintegrate while they sleep. The result is lookalike people whose minds are regimented and insensible. They also have the nasty habit once they have virtually taken over of shrieking in unison at people they spot as still being human.

I arrived at my bus stop at 10 am the other day, well past peak hour, and found a straight-line queue, which had its beginnings in the form of a middle-aged man who bizarrely stood at least six metres downside of the bus stop. Each of about twelve people lined up behind him. Now at this time of day no one queues in Sydney, particularly at a stop which sees barely populated buses coming at five or, at most, ten-minute intervals. We hang about higgledy-piggledy. We are not English with orderly queuing habits. I had no idea what was going on. I purposefully ignored the queue and hung about somewhere upside of the bus stop, which is where people usually hang about. Sure enough, a bus quickly came along and remained much less than half full once we had all boarded.

I found this experience disturbingly reminiscent of The Body Snatchers and half expected those in the queue to start shrieking at me when I recalcitrantly stood apart. Fanciful perhaps; nevertheless, I am fairly convinced that large segments of the population, led by elites, have taken on the attitude of mind of those whose bodies have been snatched.

I watched Andrew Bolt on Sky News (3 December) admirably defending Tony Abbott, who had come under a shameful attack by the wretched premier of Victoria for having the temerity to visit a friend in jail who he (Abbott) justifiably believes to be innocent. By the way, I say justifiably because to my mind Cardinal George Pell is a political prisoner. There is no way on the evidence presented that he could have possibly be found guilty in the ordinary course.

But it is not the stain on our justice system that I want to refer to. Nor do I want to say more about the disgraceful intervention of the aforementioned wretched Daniel Andrews who, if he were not insensible to self-reflection and shame, should now be hiding under a rock. I want to say something about one of the two parliamentarians Bolt had on to discuss the matter.

The one I don’t want to talk about is Senator Kimberley Kitching of the Labor Party. I had low expectations of her and she delivered accordingly. It is Liberal Senator James Paterson who deserves attention. Bolt twice gave him the opportunity to support Abbott and denounce Daniels. He squibbed both opportunities with meaningless political-speak. It was contemptible.

How in the world did we Deplorables ever deserve to be represented by Contemptibles? Do we get the politicians we deserve? I am not sure we do.

I suspect that a subterranean elitist system has been constructed on both side of politics which rewards those who can worm their way through it. Being contemptible obviously helps. At least, that is my conclusion. Otherwise, why don’t we get many straight shooters in the parliament. Instead, what we get is people so desperate not to stray from the party-line that they spew non-descript drivel whenever a matter of principle comes up. You see, whatever independent mind they started out with has been replaced – by pods, or by self-serving ambition, I don’t know, take your pick. The effect is the same.

Israel Folau and the incomparable Margaret Court have the gall to state views outside of the new ‘woke’ normal. So, people politely disagree with them? No, they shriek. They want them cancelled. Rubbed out of employment and history. Convert or perish. Fall asleep and let the pods replaced you or else. By the way, it amuses me when even supporters of Folau express their disagreement with his views. His views are biblical views. They are God’s views. Folau is no more than an amanuensis. What these supporters should say is that they disagree with God or alternatively that they believe the views are baseless because there is no God. Please don’t blame the messenger.

I see that Chick-fil-A announced that it is stopping its donations to the Salvation Army. Owned by ‘principled’ Christians, the US chicken sandwich chain has been shrieked at many times by the LGBTQ collective for, shall we say, embracing its Christianity. Apparently, the fault of the Sally Army is that it opposes SSM – a grievous departure from settled opinion among pod life. The owners of the sandwich chain blinked. I hope they don’t think that is the end of their troubles. Only worshipping pagan gods and having transgender-chicken feast days will do the trick.

I wouldn’t be surprised if all those queuing at my bus stop turned out to be ABC watchers. All of them believing in the climate emergency. All of them insensible to the fact that if such an emergency exists, we are, inevitably doomed. Maybe they are just insensible, full stop. Dana Perino, George W. Bush’s very proper ex-press secretary, said something sensible the other day. An impolite version: “If you are a climate alarmist and don’t want to talk about nuclear energy then eff off.”

You have to be a complete and utter idiot to think we are going to be all drowned or frizzled or desiccated unless we stop emitting CO2 and yet renounce the only possible solution. Well, you have to be an idiot or, alternatively, have a regimented mind conditioned to accept whatever you are told by a higher power. In our case, by the ABC, comprised entirely of pod life. But there are plenty of ABCs overseas which do the same job. And don’t tell me that Greta Thunberg reminds you of the girl next door.

Bob Carter and Peter Ridd among others have fallen victim to having ‘deviant’ climate views. Ridd was reported to have said that universities no longer value the truth. Well of course they don’t. Academia is an incubating point for pod life. Unfortunately, hope for a renaissance of sense and sensibility is dwindling.

To go back to Folau and Chick-fil-A. They both have their Christianity in common. However, unlike the sandwich chain, he seems to have kept his principles and beaten off the shriekers. A minor victory in a losing war. Be under no misapprehension. The pods are taking over. Youngsters have been or are being converted as we speak. Of course, we Christians know that God’s justice will prevail at the end of time. But, in the meantime…

The Method in Their Madness

Right wing? No, I’m a liberal and proud of it