Another Tilt at the Keynesian Windmill 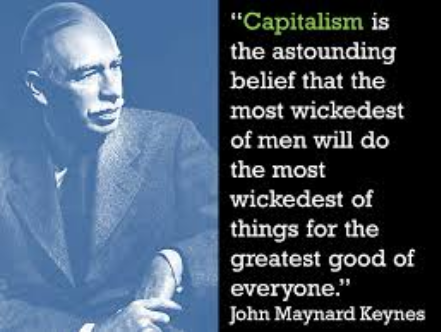 Wonder why interest rates are ridiculously low? Wonder why governments are so much in debt? Wonder why economies are forever performing below par? Look no further than the malign influence of John Maynard Keynes. He, of course, was not a bad man; he just had bad ideas. This has proved to be no impediment to their continuing currency.

I have an article in the December issue of Quadrant magazine (“Making sense of negative interest rates“) on the topic of trying to make sense of very low interest rates. My final paragraph included a reference to The Economist opining as follows: “The ECB’s critics tend to miss the underlying cause of low interest rates: weak demand across most of the rich world.”

I retorted: “Economists wouldn’t talk like that if they understood how economies actually work.” And they wouldn’t, if they had not been schooled in Keynesian economics.

Keynesian economics continues to be a blight on the economics profession and, consequently, on mankind generally. It is true that a few conservative economists try to counter its malign influence. Steven Kates is one who has repeatedly set down the arguments in Quadrant, in books, and in professional journals. More modestly, I too have tilted at the Keynesian windmill on numbers of occasions. It does no good. Central banks and treasuries are in thrall of Keynesianism. It mars their every prescription and utterance. The world is thus a poorer place materially and philosophically.

But if opposing Keynesianism does no good, why keep on? I would put the position the other way around. How is it possible not to keep on in the face of repeated offences against sound economics, however intransigent are the perpetrators?

What does weak demand mean? If it means anything, it means that collectively we in the rich world are sated. We have had our fill of today’s and tomorrow’s material goods and services. So, reflect.

Your aspiration to buy a fancier car if you could afford it or that innovative gizmo not yet invented are figments. Those Black-Friday crowds jostling for bargains are figments. None of us really want more of anything. And to be a touch sexist, if you are a man and ask your wife whether there is anything at all she would like for Christmas she will clearly say no, I am replete of shoes, dresses, jewellery, perfume, everything.

I am making the point with a sledgehammer. Apart, perhaps, from Trappist monks and nuns, we can all think of things we would like but can’t afford. Our demand is not the least bit wanting. Our means are wanting.

Good economics, of the kind taught by John Stuart Mill in the second half of the nineteenth century, recognises the reality of insatiable demand and puts the emphasis in curing faltering economies on the supply side. What matters is investing in the production of things that people and other businesses want. An economy hums along if there is a match between what is being produced and what is demanded. But demand is a relatively passive partner in this partnership. The action is on the supply side. Helping the supply side is the key.

Targeting economic policy to lift demand is a ‘cart before the horse’ prescription. It is bound to fail and bound to make things worse than if nothing were done. Economic policy should be targeted to help producers produce more things, better things, new things, cheaper things. It’s not too hard. President Trump is doing it by removing regulatory barriers; by fixing trade deals, which have hollowed out American industries; and, as did President Reagan, by lowering business taxes. Demand will take care of itself; and should be left to take care of itself.

What would Australia look like if the Reserve Bank and the Treasury completely discarded their misguided focus on demand? Well, hundreds of highly-paid public-sector economists would have to do something to justify their salaries. Just maybe they would focus all their efforts on the supply side.

Maybe, under the force of their advocacy, the onerous and elongated regulatory processes involved in developing and expanding businesses would be streamlined, restrictive practices in product and labour markets would be eased, business taxes would come down, and we wouldn’t be so cavalier about letting our industries (like the car manufacturing industry) become defunct victims of a globalist fetish for open-slather international trade. Fewer Australians would be unemployed; most would be more prosperous. And, fear not, they would all buy lots of things.

Instead, we have Reserve Bank and Treasury economists poring over the need to stimulate demand by one way or another. And any old demand will do. Just think, we would apparently be richer if we all went out and spent more of our incomes on baubles. Really? To quote Orwell (and never has it been so apt): “There are some ideas so wrong that only a very intelligent person could believe in them.” 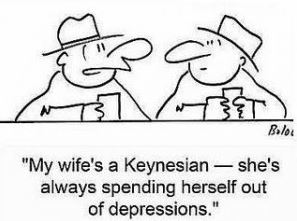 If I may be allowed to speak freely

If Muttering Turns to Mutiny…

What Will Replace the F-35?