A ‘Dark Emu’ Ally Flips the Bird at Truth 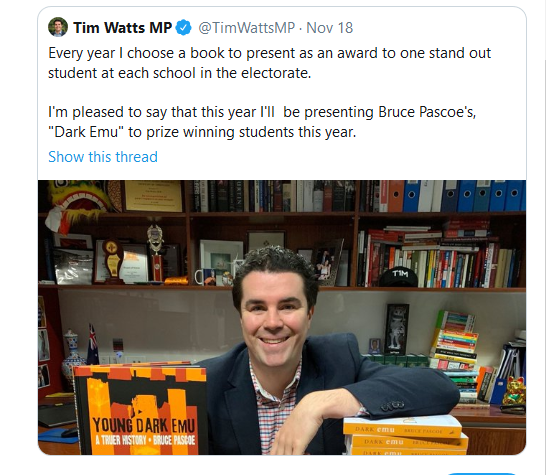 Briggs said ‘Pascoe should come clean about his real ancestry and stop abusing and benefitting from our community’s cultural integrity’. Cashman stated that she ‘knew quite a long time ago that Bruce was a fraud’.  She described his theory as condescending to Aboriginal people. She and Bolt agreed (as do I) that there is nothing shameful in a nomadic hunter-gatherer history for Aborigines. 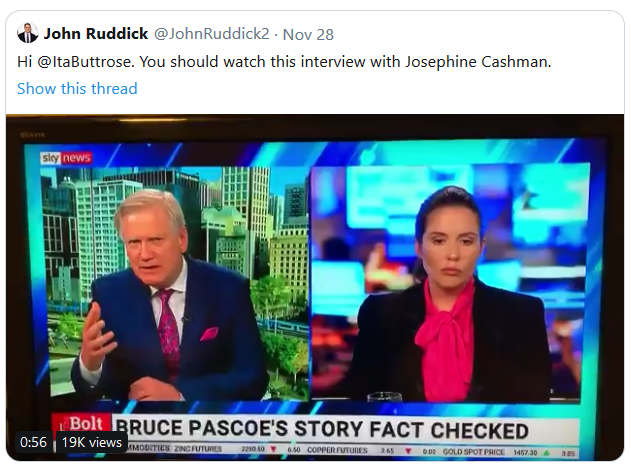 Bolt’s interview with Cashman can be viewed via this link

Pascoe’s claim that his ancestry encompassed three distinct clan groups was always problematic but I thought he was just gilding the lily.  It never occurred to me that he was not Aboriginal at all.  Given what I knew about his cavalier attitude towards truth when it comes to history, I guess should have been suspicious.

But perhaps I was gulled by the fact that he has been feted and honoured, not only by the ABC, SBS and a mantelpiece laden with literary awards, but by countless indigenous fora such as NITV, The Koori Mail, the National Indigenous Times, the Australian Institute for Aboriginal and Torres Strait Islanders Studies (AIATSIS) and website Creative Spirits, to name but a few.  Not a peep from any of them about any doubts they might have had about Pascoe’s bona fides.

Earlier this year, the Merrimans Local Aboriginal Lands Council (at the heart of Yuin country) hosted ‘a weekend of talks, tours, crafts and garden activity to celebrate and enhance the recently initiated Moodji Farm: Indigenous and Urban Agriculture Project’. Also,

to celebrate its recent milestones the project will bring together writer and historian Mr Pascoe, local Indigenous Australian artist Cheryl Davison and natural beekeeper Adrian Iodice on Saturday, June 22 for an evening of discussion on the role of honest story-telling and caring-for-country in the nurturing of a prosperous society.”.

Held at the Bermagui Community Centre, Bermagui at 6pm and emceed by South East Arts’ Shanna Provost, this event coincides with the launch of the highly-anticipated junior version of Mr Pascoe’s book, Young Dark Emu.  Inspired by Bruce Pascoe’s book Dark Emu, this initiative principally seeks to honor, repair and reinstate the intellectual and cultural heritage of the Yuin Nation through the creation and cultivation of a bushfoods garden and Djiringanj language program.  — Narooma News,  June 14, 2019

So, as recently as June this year, the Yuin community in Narooma had no doubts, apparently,  about Pascoe’s aboriginality or issues with his theory. This is understandable for those who haven’t picked through Pascoe’s farrago, checked his references and consulted his book’s alleged primary sources. Professor Marcia Langton, for instance, said Dark Emu “is the most important book on Australia and should be read by every Australian”. Such endorsements tend to establish an assumed credibility, grossly undeserved in this case.

Now Cashman has now thrown Pascoe and his theory under the proverbial bus, stating quite categorically that he is a fraud.  It remains to be seen how the agencies listed above react.  They could claim that Pascoe may have gilded the lily a bit while maintaining his book is based on work by serious researchers such as Bill Gammage and Rupert Gerritsen. From this perspective he just made it more accessible to the general public.

Here is a relevant extract from my book Bitter Harvest:

Earlier, I noted that Pascoe gives great credit to the late Rupert Gerritsen, who died in 2013, for Dark Emu – a fact noted by Gerritsen’s brother, Rolf, as quoted in The Australian article:

“Ninety per cent of Bruce’s book is taken from my brother’s research,” Rolf Gerritsen says with a chuckle, adding that this is not to belittle Pascoe’s considerable achievement in popularising complex issues and shifting the national conversation about indigenous history.

I have not delved deeply into Gerritsen’s work, but what I have read shows him to be a serious and objective scholar. I am not sure he would have been quite as sanguine as his brother in having his work so closely associated with Dark Emu.’

I might have been rather prescient with that observation. Following Andrew Bolt’s expose, I wondered if the Aboriginal establishment would fold or dig in. Today I think I received my answer.

at the National Library of Australia reviewing the original documents and explorer accounts in general.  They are – at every instance – quoted verbatim and cited accordingly in an extensive bibliography at the end of Pascoe’s book.

Thomas Mitchell also noted a town of 1,000 people in his journals, and the quote is attributed to Mitchell in Dark Emu at the bottom of page 15.

Bolt, when he does reference Mitchell, gets the date of that quotation wrong too.  He says it is from Mitchell’s 1848 journal, when in fact the quote is from his 1839 journal.  This too is recorded faithfully in Dark Emu.

Let me deal with the confusion around dates. Andrew Bolt was probably confused by the fact that, on at least one occasion (an article in The Australian), Pascoe claimed this incident took place in Queensland, in which case it could only have appeared in the 1848 journal, the only time Mitchell went to Queensland. But as to the claim itself, it is true to say that, on this occasion at least, Pascoe quoted Mitchell with greater felicity than is his norm.  But the explorer’s actual quote contains no reference to a population of 1,000. That appears in Pascoe’s own words:

He (Mitchell) counts houses and estimates a population of 1,000.

To repeat, those words, contrary to Morton’s claim of “verbatim and cited accordingly”, do not appear in Mitchell’s journal. At this link readers will find the entire 1839 journal, available to be searched for key words by the simple expedient of a CNTRL + F search. Conduct such a search of the text and you have to wonder just what Morton or his researcher was doing over the course of those two days in the stacks. In fact, as I believe I have shown, unequivocally, in Bitter Harvest, at no time did either Sturt or Mitchell on any of their expeditions encounter a village of 1,000 people.

Yet again we see how Pascoe frequently ‘quotes verbatim’ but adds his own interpretation or context.  Here is another example, from page 20:

When Mitchell arrived at the Victorian Grampians in 1836, he saw ‘a vast extent of open downs … quite yellow with Murnong’, and ‘natives spread over the field digging for roots’.

I can’t speak for anyone else but what this passage conveyed to me is a multitude of natives industriously working a huge field.   If you read Mitchell’s journal, as I have, we find his September 14 entry records:

Several extensive lakes appeared in the lowest parts adjacent; but what interested me most after I had intersected the various summits was the appearance of the country to the eastward, through which we were to find our way home. There I saw a vast extent of open downs and could trace their undulations to where they joined a range of mountains which, judging by their outlines, appeared to be of easy access.

Unfortunately, we have to wait until the September 23 before we encounter the ‘natives spread over the ground digging for roots’:

This morning a thick fog hung over us; but having well reconnoitred the country beyond I knew that I might travel in a straight line over open ground for several miles … and as we proceeded we saw two gins and their children at work separately on a swampy meadow; and, quick as the sight of these natives is, we had travelled long within view before they observed us. They were spread over the field much in the manner in which emus and kangaroos feed on plains, and we observed them digging in the ground for roots

So, two Aboriginal women and their children in a swampy meadow.  Not a multitude harvesting a crop in a vast extent of open downs after all.

Dark Emu is littered with such deceptions, but you’ll have to buy Bitter Harvest to enjoy them.

Morton also says, in relation to correspondence between Bolt and The Saturday Paper:

In his rebuttal, the Herald Sun columnist has been forced to accept there were incredibly sophisticated settlements and seed-milling operations …

Here is Andrew Bolt’s rebuttal by way of response to Morton, See if you can find the columnist accepting ‘there were incredibly sophisticated settlements and seed milling operations’. Moreover, this assertion is simply not true, as any complete reading of Sturt or Mitchell will attest.

The critique of Dark Emu is a job for actual historians not Andrew Bolt and others who benefit financially from tearing apart the lives of people looking for family.

I readily concede that I am not a professional historian, but neither is Bruce Pascoe.  And as far as gaining financially from this saga, best to follow the money — and it doesn’t lead to the Dark Emu‘s critics. Quite the reverse if fact.

The Case for Abbott Redux