The Problem with Norwegians

The overwhelmingly left wing US foreign policy Establishment would not normally let slip that all is not peaches and cream in Africa, that the Dark Continent is a bottomless pit which will absorb aid funds without trace of improvement for all eternity. So what gave Foreign Policy cover to report that the U.S. ambassador to Zimbabwe, a man of African ancestry, continues to be vilified in racial terms by the Zimbabwean government? It is likely the abuse was prompted by President Trump’s reported comment in which he is said to have used a pithy aphorism to describe some of the countries from which recent waves of immigrants have come.

The President, as you might recall, expressed a preference for migrants from Norway. Perhaps he was thinking of the likes of Ann-Margret, who migrated to the United States in 1946. Other Norwegians have been less pleasant — and there is a tie to Zimbabwe. Norway in the 1980s had a prime minister by the name of Gro Harlem Brundtland who secretly financed the establishment of communist regimes in southern Africa through the Norwegian Development Agency. That is one reason why the Brundtland commission on climate, forerunner to the UN climate commission, chose to convene its conferences in Harare over 1986-87.

Not to be outdone, Norway’s neighbour, Sweden, also was up to no good in Africa. Sweden pursued and fostered a secret military cooperation with Robert Mugabe and his then-head of state security, Comrade Mnangagwa, who recently replaced Mugabe as the country’s dictator. Funded by the Swedish International Development Agency (SIDA), this cooperation, starting in 1969, was top secret, even from the Swedish parliament, which authorised SIDA budgets. Similar efforts were made by Swedish socialist governments to encourage and establish communist regimes in South Africa, Ethiopia, Angola, Mozambique, Guinea Bissau and Zambia. 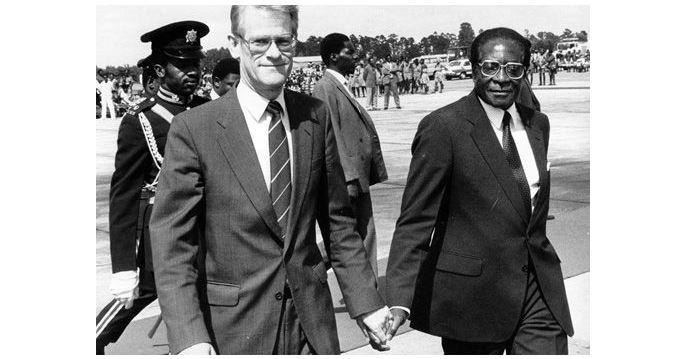 Sweden’s Ingvar Carlsson hand-in-hand with Mugabe in April 1989 during an official visit to Harare.

Take Swedish prime minister Ingvar Carlsson, for example, who returned from a visit to East Berlin, where he discussed further military cooperation in southern Africa, then headed almost straight away for Harare to consult with Robert Mugabe.

Sweden may have been doing its best to advance the cause of communism in Africa but that did not necessarily endear the country, its leaders and people to the Soviet Union, which was never afflicted by the modern Western notion that war can be sanitised of its unpleasant aspects. We have bans on simple chemical explosive devices, including land mines and cluster munitions. By contrast Soviet doctrine was grounded in grim reality, certainly not on the notion that the enemy would fight the way we would want him to fight. Rather, the Soviets adhered to First Lord of the Admiralty Jackie Fisher’s dictum, “the essence of war is violence — moderation in war is imbecility.” Hence the profusion of Soviet submarines popping up — at least once against its captain’s wishes — inside Swedish territorial waters. In the event of the Cold War turning hot the Soviets had no plans for a wholesale occupation of Sweden. They just wanted to be sure that they could deny NATO access to Swedish harbours, airfields and airspace. That philosophy outlived the Soviet Union, something of which Sweden became uncomfortable aware in 2013 after a “dry run” nuclear attack on Stockholm by Russian bombers.

Mind you, the Russians were just as hard on themselves. In the event of conflict on the north German plain, Soviet troops were instructed not to shoot down any NATO cruise missiles en route to the Soviet rear in case the warheads were set to self-destruct, blowing a hole in the Soviet front line. They would rather sacrifice a city than a battalion on the front line.

Due to a peculiar form of self-loathing, the pathology of which is hard to comprehend, Sweden continued its love affair with the Third World over the last few decades and invited many Third World types to live there. Having failed to alleviate the problem with a barrage of spin and denial, the Swedish government is now considering its options. The election due this year may even sharpen its thinking and response to growing lawlessness, as it has that of the country’s emergency response workers. The mainstream theLocal.se website reports:

…emergency services do often adapt their behaviour, for example by making sure that there is proper back-up, by entering [so-called no-go areas] via alternative routes, or by reversing their vehicles into the areas in order to make sure they are able to leave quickly if needed. Emergency services have, for example, been exposed to threats, stone-throwing, or vandalism of their vehicles. But it’s not black and white: often, nothing of note happens…

Yes, “often nothing happens”, apart from “threats, stone-throwing, or vandalism of their vehicles”, plus the inconvenience of racing to emergency calls in reverse gear. Sweden is reaping what it sowed in promoting communism abroad and making non-judgmental multicultural platitudes the law of the land at home, as gay journalist Bruce Bawer somewhat fearfully reports — a fear the new arrivals’ intolerance of homosexuals has brought into the sharpest focus.

So, Mr Trump, be careful what you wish for. Some of those Nordic types might seem pleasant enough but they could well bring with them a leftist culture every bit as problematic as the mores of the lavatorial hell holes you mentioned.

David Archibald is the author of American Gripen: The Solution to the F-35 Nightmare