The Regulatory Enemies of Promise 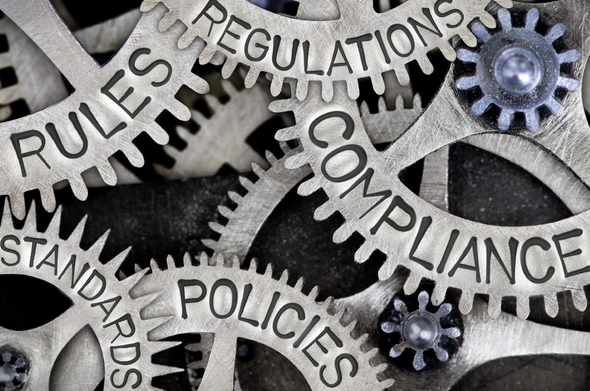 One disturbing factor regarding the Australian economy is its sluggish growth.  Per capita growth was negative in 2018/9 and has not had a sustained run above 2 per cent since the pre-2007 Howard/Costello years.

The key drivers of growth are capital investment (with its associated technological gains) and freedom from regulatory provisions that distort the direction of capital spending away from the most promising venues.  The slowdown in (non-dwelling, private) capital investment in Australia over recent years is clear and as a share of GDP is illustrated below.

The share of GDP comprising investment reached a recent peak of almost 18 per cent during 2012 and has steadily fallen to under 11 per cent in the June 2019 quarter.  This is the sort of level we saw post 1975, when recession and inflation brought economic recession and, in the early 1990s, presaging Paul Keating’s “recession we had to have”. 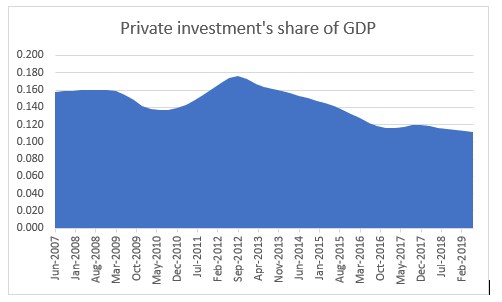 Moreover, at least in comparison the 1990s, the current lacklustre investment levels are not taking place during a period of deregulation and privatisation.  These brought about a considerable improvement in the efficiency and pay-off of each dollar invested from the Hawke/Keating deregulatory reforms from the mid 1980s and the later Howard/Costello follow-up. Present private investment levels, at around $220 billion a year, are about $40 billion below that in the 2012-14 period.  And the quality of existing investment is eroded by regulatory measures across a range of industries, notably in water, energy and telecommunications.

In regard to water, governments have spent $13 billion to reduce the value of the nation’s only major irrigation area, the Murray-Darling. Of the average flow of 34,000 gigalitres a year, some 11,000 went to irrigators, following the implementation of a cap on extractions in 1997. Politicians faced a dilemma.  They could have increased supply of water for productive purposes by abandoning the artificially created fresh-water lakes at the Murray mouth, through which flows 2000-5000 gigalitres of water.  Or they could listen to excited pseudo-environmentalists urging us to reverse course and derate the river as an input to agriculture. They chose the latter and the present plan takes about a quarter of irrigators’ water.

Energy subsidies have brought around a billion dollars a year in wind/solar investment as well as an annual $3 billion in on-going diversions of consumers’ spending on electricity in subsidies to pre-existing renewable facilities.  Far from increasing output, this has had negative effects in forcing premature closures of lower cost coal generators, boosting prices two-and-a-half fold and causing a deterioration in reliability. Those affects have brought a halt to energy intensive industry investment and a reduction in the national capital stock through disinvestment in aluminium plant.

Anyone who thinks there might be a shift back to market-based energy solutions need look no further than the energy ministers’ shopping list of proposals for increased spending on renewables and on the transmission lines that will facilitate this.

The other great waste is the NBN.  Surely nobody believes the Turnbull assessment that this program delivers a net $18 billion benefit. The fact of the matter is that it offers a poor return on its $50 billion plus, (around $5 billion a year) price tag.

The shortfall of investment over the past five years is clearly evident.  This will not be offset by the Prime Minister’s announcement of $4 billion in public infrastructure being brought forward.  More potential is in his simultaneous announcement that approval processes will be expedited.  But we have been there many times before only to see the regulatory morass get increasingly sticky.