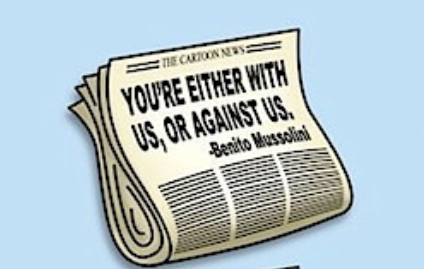 Hillary Clinton’s reference to the deplorables and irredeemables gave shrill voice to the bleeding obvious: the elite’s disdain for the great unwashed. The Brexit imbroglio and the so-called ‘climate emergency’ reveal it in full force.

The elite deal in two currencies. First, they are globalists. What better way to distinguish yourself from the parochialism of underlings? But second, and my focus, they offer false choices.

False choices abound. The new progressive left is particularly fond of them, though elites on the other side of the political spectrum are also in the mix. As different as they are, false choices share a binary characteristic. Do as we say or face catastrophe or otherwise transgress against nature or morality. There is no third way apparently. Let me give you an inkling of what I mean.

# Remain in the EU or experience prolonged and severe economic disruption and permanent immiseration.

# Allow abortion on demand or callously rob women of their reproductive rights.

# Allow men who wannabe women into women’s sports and bathrooms or be a nasty anti-LGBTQ bigot.

# Welcome refugees without limit or be a pariah among nations (and, as atheists remarkably seem to agree, offend Jesus).

The stark choices offered have no basis in reality. Trade between the UK and continental European countries is mutually beneficial and will remain extensive whether the UK is in or out of the EU. Elites know this but are offended by nationalism – unlike those flag-waving deplorables.

Clearly, present-day renewable energy is so ineffective that relying on it will undoubtedly do us in whether we fry or not. There is, for example, the viable third way of nuclear power, if frying is actually thought to be on the cards.

Abortion is notoriously difficult to get to grips with. I personally have given up on reaching a conclusive view. But as the life of another party (the fetus) is in play it’s perhaps best not to deal in absolutes either way.

Is everyone like me? Heartedly sick of people putting their sexual and gender preferences on the menu. I am not interested. I think SSM is an absurdity. At the same time, my beloved niece is a lesbian with a longstanding partner. They just get on with life. And if they were to ever get married, I would happily attend.

If you are a big hairy man (as Dr Ben Carson is alleged to have put it) please don’t barge into women’s bathrooms or compete in women’s sports, even if you do wear a frock. Common sense, fairness and decency point to a tolerable third way. Tolerable for all parties.

Finally, refugees are welcome? Give me a break. I can find no biblical or other moral imperative that says that the itinerant knocking on your door must be given permanent occupation in your spare room. The Good Samaritan paid for temporary accommodation at an inn. It would be nice if those elites favouring open borders, living in exclusive suburbs, kept in mind the interests of their deplorable fellow citizens who must live cheek by jowl with refugees and pay for their upkeep in taxes and lower wages. It would be nice but it won’t happen. That’s the nature of elites.

Wolfgang Kasper had an excellent article in the September issue of Quadrant on immigration (“The Epochal Challenge of Mass Immigration”). However, even Kasper participated in giving currency to a false choice. “Many in the left-leaning and the libertarian elites also plead for open borders to signal their virtuous political correctness,” he wrote perceptively. But then there was this:

A better, less disruptive alternative to opening the borders to uncontrolled migration from the South is free trade. Economists have long shown that the free trade of goods and services is a substitute for the movement of people. Of course, if Western protectionism prevents the produce and products coming in from the South, then the farmers and the workers will come. If US tariffs hinder the import of cars from Mexico, then Mexican workers will dig tunnels under the border wall to come in.

So, there it is. Allow companies to offshore their operations, sack their workers and ruin communities or face the prospect of floods of unwanted economic migrants. This is nonsense. Resolve, big beautiful walls and guns can keep unwanted people out; or resolve, seas and gun boats, as Australia is showing. But that is a small part of it.

Conservatives pin their hopes on a third way. That way entails Third World countries getting their cultural act together. For there is no reason beyond their own corrupt ineptitude why they can’t become prosperous in their own right. And become good neighbours instead of mendicants and parasites. For our sake and theirs it is best to encourage good behaviour not pander to dysfunctional behaviour.

A Blur of Khaki Spin

Logic Joins The Hunt For Flt 370

On Lit Board grants, words fail her