Such statements cannot, however, be substantiated by those who devise such policies. Since it is the same Keynesian model that has been the basis for the stimulus package that is also the basis for the modelling undertaken to provide the counterfactual, the result is that all that has been shown is that the model predicts any policy based on its own structural design will be successful.

What is normally done in such circumstances is, to state the technique in its simplest terms, is this. The model is run in which a baseline estimate is created which examines what would happen if no policy changes were adopted. Then the model is run a second time with various policy changes introduced. One can then say, based on the model’s results, that the policy would have a particular set of effects.

That is the way in which policy options are generally assessed. But it is only a genuine test of the policy if either the model actually does replicate the way in which the world operates or, and this is much weaker, if everyone who uses the model agrees on its structure and is willing to accept its conclusions.

In the present case, however, critics of the Keynesian approach to modelling are very unlikely to accept conclusions from a Keynesian model. Almost all such forecasting models are built using Keynesian parameters in which a stimulus will with certainty provide positive results.

But for all that, there is no outside form of authentication that can be applied. And while it can be argued that the parameters on which the model was built are based on the actual previous contours of the economy, the fact remains our present set of circumstances are so unique that no model can have had its underlying structure based on the situation we now find ourselves in.

An important instance of such wrong forecasting is found in the United States, where  the initial modelling of the effects of the stimulus unquestionably overestimated its effects. The Obama Administration provided early on a comparison of the rate of unemployment that would be reached if no stimulus were applied (the baseline case) and then the outcome if a stimulus was applied.

The Innocent Bystanders blog has been comparing the actual unemployment rate with the original baseline projections and the projections made by the Obama “economic team”. These are shown in the chart below. 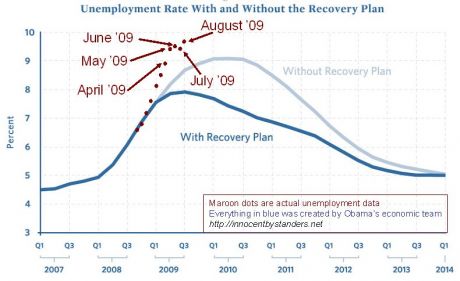 The set of dots shows the actual unemployment rate in the United States. What is clear is that the unemployment rate not only has not fallen, but is well above the rate projected to occur even had there been no stimulus at all.

Two conclusions may be drawn. Firstly, such projections are merely the results of a set of models built according to the economic concepts of those who write the programs. In this instance, they are Keynesian models. They therefore cannot be used to test the validity of their own basic structure if the core question is whether that structure is valid in the first place. This is circular reasoning and logically invalid.

The second point is the more important. The Obama Administration indicated in advance the positive effects its stimulus package would provide. The stimulus has shown itself not to have worked, at least so far as its original projections are concerned. The Obama Administration has since stated conditions had actually been worse than originally thought, but that is only an after-the-fact rationale.

It is just as plausible to argue the stimulus has not only not worked but has made conditions worse than they would have been had no stimulus been applied.

The god who failed

The Guardian of the Inane