The Language of Luvvies

Quadrant Online’s email inbox receives many unsolicited proposals and promotional blurbs, including quite a few from arts organisations looking for publicity. Most are worth no more than a glance before being flicked to the trash file, but every so often a pitch arrives that is beyond remarkable. The press release reproduced below in italics comes from the National Institute of Dramatic Arts (NIDA), which is keen for media outlets to address what it sees as a deficit of “cultural leadership”. As befits a school of theatre arts, it is more than a tad on the breathless side of the overly dramatic — a frame of mind captured in the three short words of the press release’s headline, “Collaborate or Die”.

For taxpayers curious to learn a little what their arts dollar buys, NIDA’s screed is reproduced in full below. The links and asides provide some background and context.

Speaking at the farewell of the first graduates of NIDA’s Master of Fine Arts (Cultural Leadership), Robyn Archer AO, the Australian singer, artistic director, public advocate of the arts and Chair of the course, threw several challenges to the room full of leading artists and influencers.

Ms Archer’s faith in the artiste community’s capacity to assume national leadership might strike some as an egomaniacal conceit, but it is actually quite modest by luvvie standards. In 2010, fellow NIDA grad Cate Blanchett crowed of creative types’ bravery at the risk of their own lives, no less, in repealing both history and the law of gravity, among other neat tricks:

“We change people’s lives, at the risk of our own. We change countries, governments, history, gravity. After gravity, culture is the thing that holds humanity in place, in an otherwise constantly shifting and, let’s face it, tiny outcrop in the middle of an infinity of nowhere.”

But enough of Ms Blanchett and her life-risking defiance of gravity. Let us return to the NIDA press release

What is courage in the arts in our 21st century society? Has the concept of an arts leader battling it out on their own become a thing of the past? 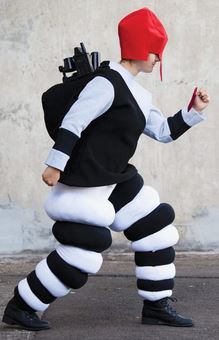 Out of curiosity, can anyone name the last “arts leader battling it out on their own”? Quadrant readers might suggest this very magazine, as the Australia Council cut us off without a cent several years ago (which is why subscriptions are vital to our survival). But a conservative publication probably isn’t what NIDA and its publicist had in mind. For a ledger of those whose creativity gets a taxpayer leg-up, follow this link to the Australia Council’s “awarded grants” search function. Have a poke about, perhaps by entering your federal electorate in the appropriate box and seeing who has been getting how much for what.

Quadrant‘s southern office is located in the Melbourne electorate of Gellibrand, where a search of recent awards confirms we are indeed on our own, the $48,000 we once received no longer figuring among the results for those who are “battling it out”, albeit with quite a lot of help from the public purse.

Take the Croggon clan, for example, our Gellibrand neighbours. Since late in 2013, Ms Alison Croggon, a former Age journalist, much-published author, poet, drama critic and impeccable leftist, has battled away with the assistance of $120,000 in OzCouncil largesse. Daughter Zoe, an artist, has collected $30,000. One of her works, “Harp” is above at right.

In what might be seen as a demonstration of its support for family values — and artistic merit, of course — the most recent tranche of Australia Council handouts has honoured Croggon patriarch and playwright Daniel Keene with a $32,400 recognition of his worth. His wife, who once lamented Australia’s blindness in not recognising hubby’s “boldly, even flamboyantly theatrical, and profoundly poetic” genius,  must be tickled pink. While these three artistic battlers must get by with just $182,400 in grants between them, all heads around the kitchen table can now be held high and proud that government arts bureaucrats value them so very highly.

But let us return to the NIDA plea for more stories about the shortfall in cultural leadership.

‘We should stop thinking of the leader as king, but rather of the leader as facilitator,’ said NIDA student and producer and performer Michael Cutrupi, working for the Department of Premier and Cabinet in the Victorian State government. ‘Someone who is capable of internalizing the values of democracy and passing them onto the people in their organization is a leader now.’

Strange things happen in Victoria, where the government of the day is shutttering cheap and reliable coal-fired electricity generators and replacing them with … diesel generators, so the working presence in the Premier’s office of the actor responsible for the sampler video clip below would seem by comparison the essence of rational management. Readers might enjoy Mr Cutrupi’s empathy with the eating habits of small children at the 50-second mark, not to mention the snatch of footage from Nude Study at the start.

‘There is always room for charismatic leadership but that can be a double-edged sword,’ said Associate Professor Cheryl Stock AM, Director of Graduate Studies and Head of Cultural Leadership. ‘We are finding that survival is dependent on leadership that is empathetic and collaborative, not hierarchal (sic). We want to talk fearlessly about the difficult issues that the cultural sector is facing.’

And “talk fearless” is what the NIDA press release proceeds to do. Unfortunately, all that fearlessness will be lost on those who speak not the language of Luvvie. Problematic turns of phrase are highlighted so that readers will be able to ask for translations, should they chance upon a battling and empathetic collaborator in danger of premature death at the hands, presumably, of bogan taxpayers

Issues arising from the course:

BlakDance has received $1.33 million from the Australia Council since 2009, the most recent bestowal of $710,570 arriving only last year.

In the clip below Ms Donnelly outlines the giant strides taken by confabulators at National Indigenous Dance Forum. Among the leaping battlers’ resolutions (exactly six minutes into the clip) are the “five things” determined as key goals. Garden variety taxpayers, as opposed to artistic battlers in peril of sudden death, might again have trouble understanding Luvvie-speak, but the first agreed-upon priority is pretty clear: the artistic need for international exchange programs and travel.

Well, if you are the happy recipient of other people’s money, why not spend it?

Roger Franklin, editor of Quadrant Online, applied to study at NIDA in his youth. Fortunately for both parties that ambition led nowhere.

The Big Lie in Gaza