Race is One Thing, Good Manners Quite Another 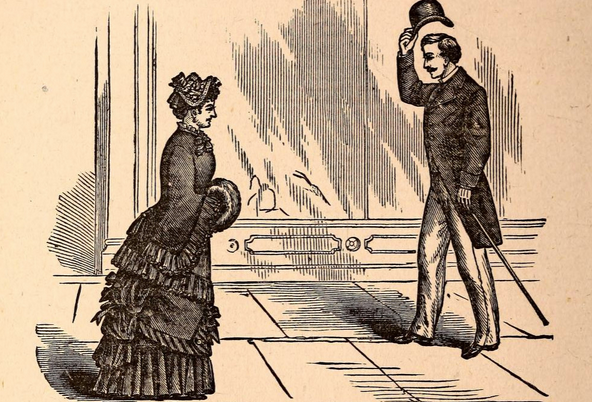 I suppose a country that has always depended on immigration, and more recently has developed to an astonishing degree an unseemly pride in the great number of cultures, colours and races in its population mix, would enthusiastically embrace political correctness in defence of its misplaced policy of multiculturalism. Hence it is not merely difficult, but verboten to question or comment on the habits, behaviour, attitudes or peccadillos of any of the peoples that make up the aforementioned mix.

These thoughts came to me today as I was quietly reading my daily newspaper on my tablet in a busy shopping centre at Chatswood, on Sydney’s North Shore. I was filling in time while my wife underwent a minor surgical procedure. For those not familiar with the area, I should explain that the suburb’s name derives not from an English estate (as it may seem) but from a typical Australian habit of familiarising personal names. Charlotte Harnett was the wife of Richard Harnett, mayor of the encompassing Willoughby Shire in 1870, and know to her intimates as “Chattie”. The large area of timbered country on the northern slopes of the shire became known as “Chattie’s Wood”.

In recent years Chatswood has exploded from a quiet residential suburb with a central spine of shops intersected by the North Shore electric rail line to a mini-metropolis of vast malls, office buildings and towering apartment blocks. As a result, the Vanderfield & Reid timber yard, which was conveniently close to every Chatwood DIY-er’s home, had been banished by  developers and rising land values. The little shed where I used to leave my bicycle to catch the train to work was swept away by the construction of a bus interchange. So passed an era.

The new Chatswood is now Sydney’s Chinatown North. As the emigration flow moved from Europe to Asia, canny Chinese arrivisti assessed the location, only seven stops from the CBD and its stock of cheap Federation houses as ripe for massive development. In time many shops, and the inventories of the major stores changed to accommodate the tastes and needs of the growing Chinese population.

Today I was sharing my bench peacefully with an elderly Chinese couple — one reading his Mandarin newspaper on a tablet while his wife sent texts from her phone – when a burly young man plonked himself down beside me. I took no notice until he started talking loudly on his mobile phone.  I shrugged and tried to concentrate on my reading, when suddenly a he let out a great shout and yelled down the phone in Chinese. This was too much. I turned to him, put my finger to my lips, and said “Shush!”   Obviously taken aback at his rudeness being highlighted, he got up and left.

In all the PC-type talk of diversity and respect due in Australia today, there is little or no discussion of the cultural norms migrants bring with them, and the friction due to variances from Australian norms of politeness, courtesy and deference to age or infirmity. With the high proportion of Chinese residents concentrated in Chatswood, and spilling into adjacent suburbs, permit me to make some generalised observations about national characteristics. The rudeness of the young man, barking into his phone without consideration for others close by, was typical. In the street, Chinese men and women of all ages push and shove, demanding right of way as if combatting the hordes in Beijing. On the roads of the North Shore, Chinese drivers barrel down the middle of the street because, or so I deduce, they have no feel for the width of their vehicles. Women seem particularly prone to this vehicular vice.

Muslims make up a much smaller proportion of the local population, but are more obvious in their separateness. Their rudeness takes different forms. We have seen an Arab  woman in a hijab arrogantly refuse to take her change from a young girl at the counter, indicating peremptorily that it be put on the counter so their hands need not touch.

Now these comments are “racist”, at least as Tim Soutphommasane would define them, because they directly criticise the behaviours of people of a certain race. Be that as it may, but the fact remains that such behaviours are incompatible with the expectations of other citizens who take the trouble to adapt and conform to societal standards — the sort of standarrds we once saw automatically observed. It’s not good enough for officialdom to simply preach tolerance, non-discrimination, respect and equality. ‘Manners Makyth Man’; where we encounter bad manners, or anti-social behaviour, we should call it out. And not be afraid of the ‘racist’ tag.

Les Murray saw multiculturalism as a ‘system of official racism’ with a distinction between Australian citizens from a British background and those from the dozens of ethnic groups that now make up the population.  Marlene Goldsmith in her book Political In-Correctness: Defying the Thought Police believed the issue was not racism but ethnicism. Whatever, debate and criticism should not be avoided or prevented just because issues touch on differences of origin, colour or language.

Political correctness has become a political anaesthetic, to prevent society waking up to the distortions to our way of life imposed by subservience to multiculturalism. As Roger Scruton observed in his biting article Bring Back Stigma:

Political correctness is not a morality in the traditional sense: it does not require you to change your life, to make sacrifices, or to live by an exacting code of conduct. It tells you to watch your language, so as to avoid the only prevalent adverse judgment, which is judgment of the adverse judge. It tells you to speak inclusively of other cultures, other life-styles, other values: never take a disapproving stance or use words that might imply one. Hence the extreme volatility of the new speech codes. Any phrase or idiom that seems to imply judgment of another category or class of people can become, almost overnight, an object of stigma.

14 thoughts on “Race is One Thing, Good Manners Quite Another”