Why I’m No Longer a Republican 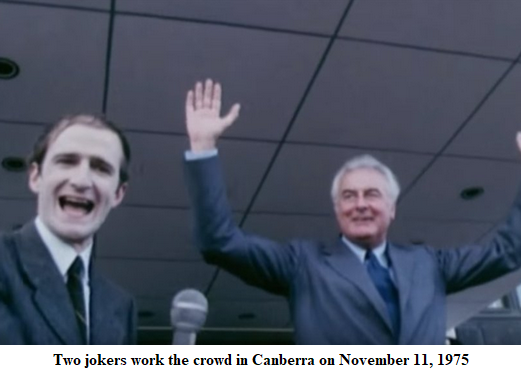 I used to be a republican of the minimalist kind.  I’m not anymore.  My apostasy began thanks to the asinine representation of the concept by the current head of the Australian Republican Movement, the hanky-headed buffoon Peter FitzSimons.

I have always believed the so-called Australian republic, as long as it were based on the minimalist model proposed in 1999, is a cosmetic change only, rather like replacing the living room drapes with Venetian blinds.  I have now come to the view that, not only can I live with the drapes, I prefer them.

What finally marked my total conversion to the ‘it ain’t broke’ school of thought is the clear anti-democratic trend emerging in Western societies.  I still think that, in theory, the minimalist model could be made to work.  But I also think it is highly unlikely it would be allowed to operate as it should, i.e as a seamless transition from one symbolic head of state to another, all other aspects of our governance being unaltered.

When the next referendum comes, as it inevitably will, the most obvious danger is that misguided ideologues would prevail and the ‘elected president’ model be chosen.  That I would die in a ditch to prevent.  The dangers are obvious, but let me point out the obvious fallacy underpinning that model.  Its proponents claim a president appointed, in some way, by Parliament, would be a ‘politicians republic’.  The cognitive dissonance involved in this claim is hard to beat.  Any person popularly elected to the office would have offered some sort of platform and would, almost inevitably, come to believe that they have a mandate to interfere with the government of the day if some legislation or other was at odds with that platform. It is not hard to imagine some high-profile climate or ‘human rights’ activist aspiring to the role.  And given the vacuity of current public debate and the power of social media, such a person would be a shoo-in.  President Grace Tame, anyone?

But even the minimalist model presents a danger.  Currently, we have a last line of defence for our democracy – to ensure that no government gets above itself.  That line of defence is called the Crown and it is armed with certain powers that give it teeth.  These are called the Reserve Powers.  Some are explicit in our Constitution, some are implied.  I do not intend to examine the powers in this essay.  The most controversial of these is the power of the Governor-General to dismiss a government.  Sir John Kerr dismissed the government of Gough Whitlam in November 1975.  In my view, and that of a majority of the electorate, he did the nation a great service by doing so.  But he has, since then, been vilified mercilessly by a cabal of revisionists who are determined to ensure that, by their association with Kerr, the Reserve Powers themselves are discredited. (I do not intend to examine the Powers in this essay, however, as I am currently writing a book on this subject.)

When the next republican debate comes up, you can bet the Reserve Powers will be part of that discussion, just as the actions of Sir John Kerr will be misrepresented to either eliminate or drastically emasculate those same Reserve Powers on the basis that, whatever value they might have in theory, this is outweighed by the damage they can do in the hands of a rogue operator. That would be a tragedy for our democracy.  Yes, that is just a belief on my part.  I can’t point to any specific scenario wherein they might again be called for.  But that is the whole point.  The powers are deliberately opaque so they can be employed in unforeseen circumstances.

What I see happening in the State of Victoria fills me with great concern.  Here we have a government that is virtually unaccountable to its electorate.  It is governing by fiat, it has suspended Parliament, it has politicised its police force (and not just in relation to COVID), and it has suborned its judicial systems.  The Coates Enquiry into the hotel quarantine debacle gave us a clue about its modus operandi in this respect, but the recent WorkSafe decision really bells the cat.  This is a body stacked with Labor appointees, tasked with overseeing Labor’s own legislation, using blatant sophistry to get its mates off the hook at great cost to the taxpayer and showing utter contempt for the families of 800 dead, in particular and to the Victorian public in general.

It would take a blind optimist in this day and age to believe circumstances like these could never replicate themselves in the federal sphere.  Whatever you might think of Malcolm Fraser and Gough Whitlam, they were products of a system where accountability still meant something.  Those days, as Damiel Andrews demonstrates daily in his arrogance and deceptions, have long gone.

It would be blind folly to tinker with a system that delivered a satisfactory and much-needed outcome in 1975.

The Innocence of Muslims: Islam and Multiculturalism