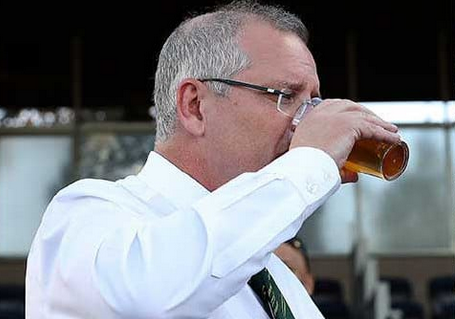 I won big on the 2016 U.S. presidential election. I am not a gambler, but the betting site was offering 5/1 in the lead up to Election Day. Five-to-one in a two-horse race? Even I know that is a gimme. How do these online gambling operations stay in the black? It was with a sense of déjà vu, then, that on Friday night – in consultation with the editor of Quadrant Online – I clicked on to Sports Bet to arrange my second wager in two-and-half years and found the Coalition at 5/1. By Saturday afternoon the odds had drifted out to 7/1! So, my advice to the electronic bookies of Australia: don’t take the political experts at the ABC et al seriously – nobody else does!

There is, of course, a touch of hyperbole in that. Obviously, there are trendy and well-heeled Green-Left types who take the ABC, PC orthodoxy, the Catastrophic Anthropogenic Global Warming (CAGW) hoax and speciality coffee seriously, but the rest of us? Not so much.

“Independent” Zali Steggall will now make the trendy and well-heeled seat of Warringah a world leader in “climate change”. Good for her and her globally-funded Get Up! backers. On the other hand, ordinary Australian patriots, the “quiet Australians” as Prime Minister ScoMo put it in his mesmerising victory speech, are now free to get on with their lives. Tony Abbott’s dignified concession speech – a performance no less mesmerising than Scott Morrison’s – made the excellent point that George Soros’ money only goes (as of yet) so far in Australia. Abbott took a hit so others might live to fight another day.

This Christian theme is more apt for a Federal election than any I can recall. Bill Shorten, someone I once spent time with and found to be personable and courteous, might still be personally sympathetic to Christian understandings. I don’t know. And it is not, strictly speaking, relevant. What I do know is that Shorten’s attempt to caricature Morrison as a narrow-minded religious bigot who believed homosexuals were going to hell betrayed a misunderstanding of what it means to exist a free society. Roger Scruton might have explained it best when he spoke about the delusions of modern progressives in The Uses of Pessimism: And the Dangers of False Hope (2010). Modernity has been an experiment in a post-tribal paradigm: our advanced way of existing “confers security and freedom in exchange for our consent – an order not of submission but of consent.” Morrison had responded to a reporter’s original question about gay people going, or not going, to hell perfectly well: “I support the law of the country and I always don’t mix my religion with politics and my faith with politics.” It was Morrison’s freedomist refrain that Shorten, the progressive, derided as contrary to his PC religion. Who, we might ask, is the real bigot here? The fate of Cardinal Pell and Israel Folau has not escaped anyone’s notice.

The real tragedy for Bill Shorten, in my humble opinion, is not that he led the Australian Labor Party to a second defeat. It is that this ostensible traditional or right-wing Labor character became the front man for left-wing PC bigotry. Was it just me or was his heart not really in so many of the policies he delivered? If we were living in a normal world, I would probably be a right-wing Labor man, but we are a long way down the yellow brick road by now.

Some people believed that the death of Bob Hawke so close to the election would result in a sympathy vote for the ALP. But when I thought of Bob Hawke, who I voted for in 1983, 1984, 1987 and 1990, I didn’t think of Bill Shorten – the image that came to mind was always Scott Morrison, a man who is comfortable in his own skin, like Hawke, and thoroughly pleased with his lot as a regular Australian. Shorten, as a public figure, has always struck me as man who sold his soul to a cult in vain bid to obtain worldly prominence. There is another Christian moral in there somewhere.

In my 2018 Christmas Eve post, “The Ghost of a Christmas Past”, I suggested – rather than predicted, to be fair – that Scott Morrison could win on Election Day if he adequately made a case that the Coalition represented some kind of respite from the remorseless PC encroachment of the Labor and the Greens. Morrison turned out to be a brilliant – and more or less solo – campaigner. The reason he was so dazzling, I suspect, is that he is an undivided and integrated person. Marriage has liberated him, not shackled him. The family life has not encumbered him but blessed him with two miracles. His passion for the Sharks has not limited him but given him a knockabout community to enjoy. And Christianity, contrary to Shorten’s appraisal, has not turned Scott Morrison into a narrow-minded bigot but given him the grace, humility and fortitude to address the real fanatics in our society. They revealed themselves during the campaign for what they really are, from Adani and genderless birth certificates to Shorten’s anti-Christian jibe. A majority of Australians realised that Scott Morrison – if not the Liberal Party as a whole – does constitute a potential respite from PC madness. Perhaps we might start with protecting Christian schools, Mr Morrison.