The present turmoil in the Middle East has profound implications for the West.  Countries are imploding; regimes are unstable and some already overthrown; radical Islam rolls over Middle Eastern societies, tearing them apart; long dormant hatreds, insecurities and faults are laid bare.

The bloodshed is everywhere and refugees are frantically trying to escape war’s insane barbarity. One aspect of Syrian tragedy of the special relevance to Western liberal democracies is the outflow of refugees, who will need resettlement.

One of the most painful faults dividing the Middle East is an institutionalised misogyny.  Habitual deprivation of women of their equality and freedom of choice is the way of life in Islamic societies.

Male control over female reproductive choices is achieved through the denial of effective contraception, institutionalised polygamy and paedophilia, denial of financial independence, widespread unwillingness to educate girls and, the most barbaric practice of all, clitoridectomy — sometimes wrongly called ‘female circumcision’. Women are expected, and ofted forced, to give birth to as many children as possible, regardless of their wishes, preferences or, indeed, physical age. As a result the tragedy of the Middle East is complicated, and in many ways determined, by the existence of the so called ‘Youth Bulge’– an excess of young unemployed and angry males with rudimentary or non-existent educations, unable to create their own families.

Even what passes in the Muslim world for an education does not guarantee a young Middle-Eastern male a place in a society or an ability to build and support a family. In effect, supplying their young men with worthless, unusable degrees makes a bad situation worse. The devaluation of a male self-worth and high levels of societal anxiety result in the loss of self-respect and perpetual narcissistic rage, fuelled by unused testosterone. The level of violence, both sexual and personal, inevitably increases in such a society.

The post-WWII acceleration of the Islamic emigration to the West, despite a direct Quranic prohibition on Muslims living under “non-believers” rule, is a direct consequence of these failing societies’ systemic faults. This emigration brought about the rapid increase in the number of angry and alienated young Islamic males in Western countries, replicating the same “youth bulge” within respective immigrant conclaves.

Radical Islamism, which is the most common ideological justification of violence against “infidels”, is a convenient self-serving excuse for an expression of  habitual rage. If not Islamism, something else would have taken its place to facilitate and justify the violence.

The seemingly unrelated phenomena of the Middle Eastern oppression of women and earlier waves of European emigration have common roots, such as unrestricted population growth; resulting population pressure; inability of impoverished and ineligible males to occupy a decent place in a society. The universality of this phenomenon is illustrated by two examples from the European history.

South American colonisation, or Conquista, was carried out by the Spanish Conquistadores or, as they were known at the time – “Secundos”, meaning impoverished younger sons of often wealthy aristocrats who were ineligible to inherit their fathers’ estates. The dormant violence of these superfluous and redundant young males was unleashed against “Indian heathens”.  The cause of spreading of Christianity was a very convenient, even “holy”, excuse for letting out the bottled rage.

The second example is to be found in the mass migration of Irish younger sons to the USA, Australia, New Zealand, Canada and South Africa. They migrated for exactly the same reason their Spanish counterparts did – inability to get their share of an inheritance, because family plots were small and, thus, indivisible. These plots were unable to support the whole family, especially in light of Ireland’s history of catastrophic crop failures. Similarly, these forced emigrants were not able to marry because they had no means nor sources of income to support future spouses and children.

This rage assumed self-destructive behavioural forms: alcoholism, family violence and petty criminality. Suffice it to say, until late 1920s many American employers did not wish, fairly or not, to hire workers of Irish origin because of their reputation for confrontation, explosiveness and alcohol abuse. The situation changed for the better when the healing process of integration transformed Irish immigrants, along with others, into ordinary citizens.

“For want of a nail”

In both cases the population pressure, due to the lack of contraception, among other reasons, has led to an external expansion and/or colonisation of other countries. In both cases, violence was present, whether directed outward or inward. Who knows, perhaps, just as in the well-known English nursery rhyme the lack of a single nail (or contraceptive pill) has also led to fearful consequences in the Middle East?

Is the Middle Eastern catastrophe happening because, among other things, Middle Eastern women are oppressed to the point of having no access to effective contraception, resulting in the Youth Bulge? If that is so, then an oppression of women in Islamic societies directly contributes to the present upheaval by having created an excess population of young males. The shameful failure of Western feminism to support suffering sisters in Islamic societies is incomprehensible for its lack of moral fibre and convenient elevation of moral relativity as a key rationale.

The transformative power of immigrant population

The system inherited by the Soviet Union from Lenin & Co. was based on the efficient functioning of slave labour, the notorious gulag. Alexander Solzhenitsyn called this inclusion of labour camps into the healthy tissues of the country “an archipelago”, because they formed a system of interconnected prison “islands” dotting the vastness of the Russian space. Their danger lay not only in the mere fact of their existence – after all, no state can exist without  penitentiary institutions – but in their impact on the  surrounding country areas, in the spread of the labour-camp culture of criminality, violence  and  anger. Areas around these prison camps have become notorious for their abnormally high levels of criminality and violence within the civilian communities.

In effect, there was a gradual transformation of the previously unremarkable civilian population, living around prison camps, into a semi-criminal society. An indigenous population of those areas adapted to a new way of life by becoming more violent, more socially disruptive and more interpersonally aggressive. The newcomers’ language becomes the argot of these areas at first, until, gradually, an entire country becomes permeated. Former inmates were directed by the Government to live in these areas in an attempt to prevent the spread of criminal culture to the rest of the country. However, this policy has failed. The country’s culture was permanently transformed by the ethos, language and behaviour of the prisons.

If we are to apply the Solzhenitsyn’s poignant description from his masterpiece Gulag Archipelago to present circumstances in the Middle East and its massive refugee problem, we would come to quite obvious and disturbing conclusions. If correct, this hypothesis has severe implications for countries of refuge, considering the poor record of Islamic immigrants’ integration and “absorbability” into Western liberal democracies.

History lessons – will we heed them? 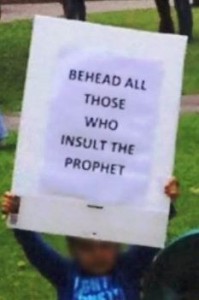 The Mid Eastern population exodus to Western countries is an unmistakeable sign of a terminal malaise of these societies – a malaise which is being transported across borders. The ability of destination countries’ Judeo-Christian cultures to withstand the impact of aggressive new arrivals and behaviours incompatible with democratic conditions is in a grave doubt.  This would appear to be especially so in the context of the Islamic Youth Bulge now increasingly evident in the West.

We should not confuse previous waves of refugees, successfully absorbed by receiving countries with the present generation of Muslim asylum seekers. The fundamental difference here is the eagerness of the previous refugees to integrate into an open society. This eagerness should be compared with the persistent desire of many Middle Eastern Islamic immigrants to recreate the Islamic societies they have left behind, instead of adopting the traditions of liberal democracy. Attempts to introduce Sharia laws have been mooted in Australia, while similar attempts in the UK and Europe have gained traction.

There is also the potential for an intentional infiltration of radical Islamists amongst the genuine refugees. This technique was used as a deliberate policy by the Soviet Politburo in the not-too-distant past to discredit genuine emigration from the USSR. The participation of American and British citizens in the recent Kenyan shopping-mall massacrre, home-grown terror cells responsible for London and Madrid bombings, participation of Australian citizens in the Syrian civil war represent but a few examples. Inevitably, they point out the danger associated with the presence radicalised Islamic minorities within previously peaceful societies.

Non-oil producing Middle Eastern and African, mostly Islamic, countries, bulging at the seams with populations they can neither utilise nor feed, export their human overflow to the West by legal and illegal means.

Judging by the experience of the former USSR and integration record of Islamic immigration in Western countries, the policy of resettlement of poorly adaptive immigrants leads to negative transformations within pre-existing populations.