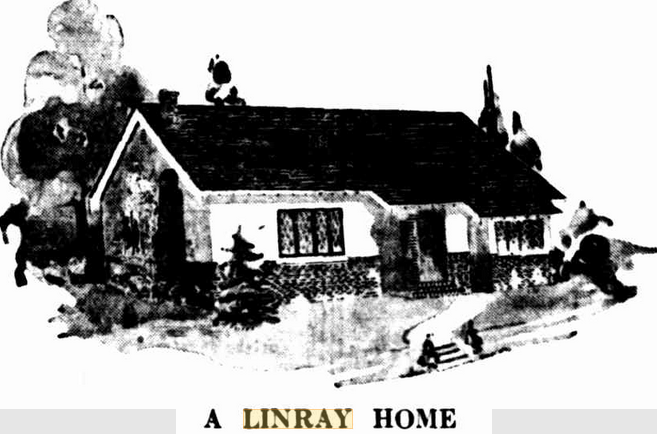 Eighty-five years ago, in the depth of the Depression,  my father, a humble PMG technician, had an architect build us a brick cottage in Brisbane. Brisbane! That colonial backwater of ideas, culture and design — where  wooden houses were built upside-down on spindly legs, swelteringly hot upstairs and cool only underneath, in the dirt.

How this came about is a story with salutary lessons for today’s  project builders and local government authorities, inflicting boringly outdated, unimaginative, inefficient and expensive  constructions on first-home buyers.  It should inspire young architects to design affordable efficient houses using the wonderful range of materials and techniques available today. It’s also a reminder that today’s first-home buyers expect too much, believing their starting point is the peak of their parents’ achievements after fifty years of thrift and sacrifice.

In 1933, a young architect, Arthur Bligh won a competition calling for an inventive way to build brick cottages that would be competitive with the standard timber ‘Queenslanders.’  He was then struggling to survive as a sole practitioner in Toowoomba on the Darling Downs. After some work for the churches, and design of a butter factory at Clifton, the Depression had pulled the rug out from under building activity.

In a daring challenge to the straightened times, an enterprising Brisbane builder, Linray Constructions, had  acquired 21 acres of the old Newmarket saleyards, then on the northern outskirts of Brisbane, and planned to build 107 homes in one of the first  model suburbs. The plan was  to build in brick, to overcome the deficiencies of un-insulated, ill-ventilated timber homes, but had to find a way of cutting costs.  As the weekly visit of the red Hunter Brothers’ trucks proclaimed, Brisbane then was the night-soil capital of Australia, but in the Newmarket estate every house was to be sewered, thirty years before the rest of the city. One of those Newmarket homes, as presented by the Courier-Mail, is pictured atop this page.

Well over 90 per cent of Brisbane housing was of timber construction, the majority upon timber stilts draped with battens – this way and that – mostly tarred black as an unfashionable skirt. Fire risk was incredible! (Several of these are destroyed by fire every year, often with loss of life.)

At a time when rejuvenated Queenslanders are the darlings of estate agents and the latte set, his judgements bring a dose of reality to history:

Undoubtedly the least costly and most efficient protection against the storms of the semi-tropics was of corrugated iron, heating to cooking levels, though asbestos cement roofing was making insidious inroads for a 10% drop in temperature, and nobody had yet thought to insulate the stamped metal ceilings – phew!  No wonder the absurd claim that the stilts made for coolness. The cool was under the house where the laundry and the automobile (if of the affluent society) shared the comfort with the kids, the family dog and dad’s work bench. Mum polished the linoleum flooring in the swelter of unventilated rooms or sought the verandah. Toilet? That was the little gabled structure down by the clothesline in the back yard.

The character of Brisbane’s housing had been set substantially by the state government’s Workers’ Dwelling Scheme. In 1909 it had enacted a measure entitled An Act to enable the Government to Assist Persons in Receipt of Small Income to Provide Houses for Themselves. The Budget provided an annual tranche from which the Workers Dwelling Board could make loans to intending home owners who met rigorous criteria.

Applicants were to be over 21 years of age, earn less than £200 a year, own their freehold block of land, and have cash for their deposits. The maximum advance was £300, two-thirds of the estimated cost of the dwelling, repayable at 5 per cent interest over a maximum period of twenty years. Repayments on such a loan were 13 shillings and fourpence per week.

Workers’ Dwellings were not mean hovels. There was almost complete freedom in design, and the Board’s architects readily converted sketched ideas into workable plans. Styles ranged from small, low colonial cottages to many variations of the elevated houses, developed over time with return verandahs, sleepouts, and multiple gables.

Historian Judy Gale Rechner, who has written extensively on the Workers’ Dwellings, catalogued twelve broad classes of design, later extending to imported styles such as the Californian Bungalow, Spanish Mission, Georgian and Kentish. The 1909 Act was amended several times, but the most significant change came in 1934, to help the Depression-ravaged building industry. The State Advances Act passed that year lifted the maximum income of an applicant to £750, 80 per cent of the cost would be advanced, and interest rate reduced to 4 per cent, to be repaid over a 30-year term. The maximum loan was raised to £1000 for a timber house and, for the first time, brick houses at £1250.  That innovation caught Linray’s eye.

Arthur Bligh’s concept was cavity brick walls for insulation, but with costs saved by building the inner wall ‘brick-on-edge’ instead of the conventional ‘brick-on-flat.’ Walls lost nothing in strength, since he used cement mortar instead of the conventional lime mortar. With the standard brick 9 inches long x 4.5 inches wide  x 3 inches high, each brick on edge raised the inside wall 4.5 inches rather than 3 inches or 150 per cent. It saved bricks, saved time, and increased the room size within the same overall envelope of the house. As Bligh explained:

Cavity walls for a rendered brick structure were 200mm compared with 275mm, and partitions (interior walls) 75mm instead of 112mm. Given two longitudinal partitions in a modest 15m deep house, 3.47m2 or approximately 37 sq. ft. is gained in floor space.. Considerable economy is seen in the structure of brick-on-edge when compared with the conventional.

Linray appointed Bligh to design the houses for what must have been one of the first project home developments in Australia. To his disappointment, the company declined to pay him on a fee basis for his design and supervision work, instead putting him on a salary. He set up his drawing office in the company’s headquarters in the old Union Bank building on the corner of Queen and Creek Streets. Linray built five demonstration homes fronting Newmarket Road, now a busy arterial thoroughfare, and went on to construct another 14 in the block behind them. Each house, of two or three bedrooms, was individually designed, with tiled roofs, rendered external walls, hard-plastered internal walls and fully fitted built-in kitchens. Thousands came to see the innovative houses, but few bought. The concept of ‘selling off the plan’ had not been invented, and the company spent its capital erecting homes for which it had no orders. (The houses are still there; a few years ago I identified and photographed each one). 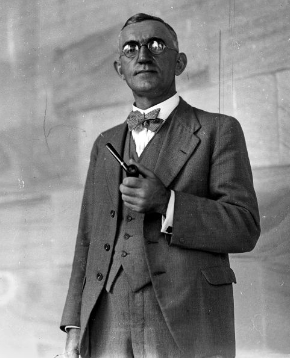 In 1933, as the first homes took shape, Linray approached the state Labor government, suggesting that the homes of the Newmarket project should be accepted as qualifying for government loans under the State Advances Act. Premier  Forgan Smith (right) flatly rejected the idea. A canny and authoritarian politician who dominated a decade of Queensland politics, he had no intention of appearing to favour brick homes for better-off citizens while trying to finance public infrastructure projects for unemployment relief.

In 1934 Linray made another attempt. It arranged a £250,000 line of credit in London – no mean feat in those times – which it offered to lend to the government to finance purchase of its houses. The cost to the government for each home, with land, would be £550, and the purchaser would have the right to pay off the loan over 25 years at 15 shillings a week. A Courier-Mail report of the time recorded how that second proposal ended:

The Minister for Works Mr H. Bruce, who controls the State Advances Corporation, the authority which deals with workers homes and dwellings said yesterday the latest proposal would not be considered … One objection to the company’s plan was that the homes would cost more than those erected by the government.

With its hopes dashed, and creditors pressing, Linray was forced to cede the titles of several of the properties to the company which had supplied its bricks. In 1937 the company slid into receivership. With the Newmarket designs finished, and the company collapsing, Arthur Bligh was out of a job. He rented part of the Linray office space and went into private practice, founding a firm, which after several iterations, flourishes today as Bligh Voller Nield. It has gone on to build some of the tallest and most prestigious buildings in Brisbane, including the Supreme Court complex.

My father was the 1930s equivalent of today’s digital nerd – up with the latest technology and competent in it. I was the only kid in the school whose family had a refrigerator. Before the War, my mother also had an electric stove, a mixing machine and an Electrolux vacuum cleaner. Remember that the Post Master General’s department was the custodian of high technology in that era, and my father was working at the cutting edge, in the Installations Branch, changing the manual telephone exchanges to the new automatic system.

He had seen the Linray advertisements, but had already bought his own block of land at Camp Hill.  So he engaged Bligh directly to build a simple yet charming brick cottage in Spanish Mission style – two bedrooms and a sunroom/sleepout and a little loggia at the side. Modern features included built-in kitchen cupboards accessible also from the dining room, an inside WC with septic tank, and a gas-fired hot water geyser in the shower-bath. (The neighbours had chip heaters). The windows were of steel, not wood; all the living room and bedroom walls were wall-papered and the floors were highly polished hardwood. The street frontage was defined, not by a picket fence, but by a low brick wall with small pillars, one of Bligh’s architectural signatures. The Camp Hill house  would have been one of Bligh’s first private projects.  (I have gifted the original plan and sketch to the Architectural Archive of the Queensland University’s Fryer Library. Strangely, it had known nothing of the Bligh story.) 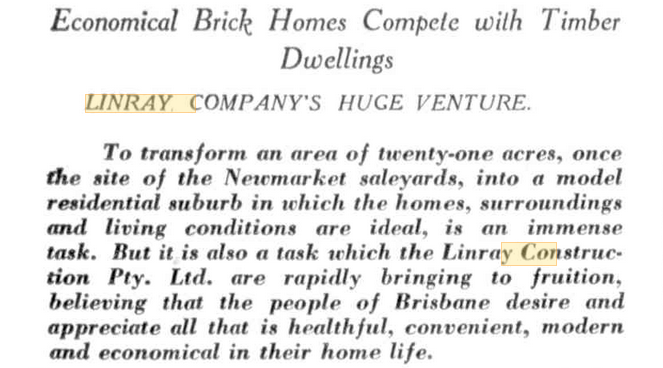 The 30-year house loan came not from the Workers’ Dwellings Board, but the AMP Society. My father, earning £4/10/- a week, paid it off in 19 years, because he didn’t like debt but did like the idea of saving on interest. The accelerated payments put a considerable strain on the household finances, and “going without things” became commonplace. It wasn’t until the war we had a radio (the ‘wireless’ didn’t add to the functionality of the home, as appliances did). The only time the family used a taxi was to take the luggage to the station when we went on holidays.

The first house built with the ‘brick-on-edge’ technique was Bligh’s own home in Toowoomba; it still stands, with its distinctive arched porch to the front door and little decorative turret, at the corner of MacKenzie and Drummond streets. When I made a tour of Brisbane, I found Bligh houses of that era and construction dotted all round the city. Along with the 19 Newmarket homes, they’re all still in sound structural condition; some have had second storeys added.

Could innovation comparable to the ‘brick-on-edge’ and cement mortar idea be revived to build modern homes for young families more quickly or cheaply?  Surely architects and builders can do better than the two-storey McMansions infesting Sydney’s outer suburbs?