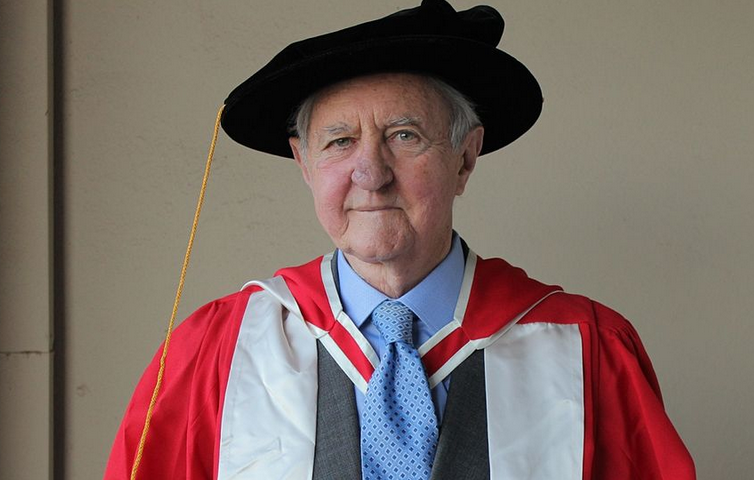 Peter Coleman in 2008, when he was honoured by Sydney University for services to Australian intellectual life.

The eulogy below was delivered yesterday in Sydney by Professor James Franklin at the funeral of former Quadrant editor Peter Coleman.

Peter Coleman himself was often asked to speak at funerals, and there was a good reason for that. He had a clarity of thought that could summarise what someone’s life had amounted to. At the same time he had a sympathetic emotional attunement that could appreciate what it was like to have someone else’s concerns.

He had a difficult family start, which left him with some permanent burden.  It was compensated for in later years by Verna and his children. On the other hand, the kind of things he did in his career lacked tenure, and the reversals of fortune usual in politics and journalism affected him. He wrote successful books, but not ones to bring in big money. It was a precarious life with no chance to rest on laurels even when there were plenty of laurels.

I mention that because he made the most of his experience, to understand others. His unselfish appreciation of people and interest in their stories and ideas is what made him such a success as editor, biographer, oral historian. I recall him saying about another editor, who he thought was a good editor, that he didn’t entirely approve of his just accepting articles whole. Peter thought the editor’s job was to help the writer explain him or herself as well as possible. Generosity and gratitude were typical of him.

He was chronically restless. He used that to advantage too, in moving across such a range of intellectual and literary areas. Hence the true description “Man of letters”. (Here’s his own comment on that phrase: obsessive scribblers, he says, “try to disguise their affliction under some other label – man of letters, philosopher, academic, humanist, freethinker, writer. None really fits the case …”)

As that comment shows, he had a strong sense of the farcical aspects of intellectual and political life. He says,

When I was elected Leader of the Opposition late in 1977, there was no shortage of advice. Clyde Packer rang from California to urge me to buy a greyhound. Rupert Henderson, the legendary director of John Fairfax & Sons, warned me to expect nothing from Fairfax (‘They are weak!’) and to take no notice of journalists.

Thus his Memoirs of a Slow Learner – I think along with The Liberal Conspiracy his most impressive book – is memorable for the recurring phrase, “now a Japanese restaurant”;  used as in “I slept at a Kent Street dosshouse and soup kitchen (now a Japanese restaurant), filling many notebooks with ‘observations and reflections’, to be grist to the mill of my novels when the time came …”

Also distinctive of his work was his sound judgement – his ability to grasp the right end of the stick in so many different areas, and have something unique to say.

That was true early, when he learned faster than most of his generation which way was up in the Cold War. It was true very late in life too, when he became involved in indigenous affairs, an area he agreed was mostly a wasteland of rubbishy ideas, when he supported the campaigns of Bess and Jacinta Price.

That was true about the big questions of life too. Most general-purpose intellectuals take an “above my pay grade” attitude to questions of religion and the meaning of life. He agonised over them, like his friend James McAuley. As he says, “once you have contracted the habit of looking behind the screen of life, once you are touched by the compulsion to examine conflicting values and ideas of the world, there is no turning back.”

His final word on the question (I think) was in a 2009 speech. He says “my Mum was a Christian. She believed in the church — for marriage, baptism, confirmation, Sunday school and so on. Dad was an atheist, hedonist and a bit of a bohemian. In my youth I thought Dad had the better of the argument. But in time I came to believe that my mother was right after all.” But he didn’t feel able to sign up to any sect or creed.

Finally, he says, “it is not true that we never learn: Something is gathered in—something worth preserving and passing on.”

Yes indeed. In fifty years’ time, when the young people of today write their memoirs, tearily evoking old Sydney with its long-gone Japanese restaurants, their minds and culture will have been formed, whether they remember or not, by someone who really understood, made his own and passed on the best that was worth preserving.

James Franklin is Professor, School of Mathematics and Statistics, at the University of New South Wales. This is an address he gave at Peter Coleman’s funeral in Sydney on April 8 2019