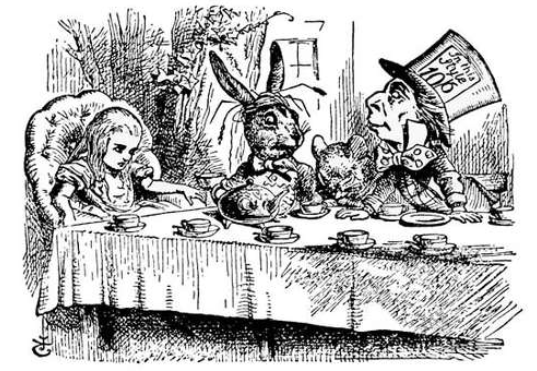 The ABC has jumped yet again through the climate alarmists’ looking glass.

The recent Four Corners  episode on global warming, Climate of Change,  reminded me of physicist Wolfgang Pauli. He described a paper as so bad “it was not even wrong.” The ABC’s presenter  was Stephanie March, a veteran ABC reporter and foreign correspondent in India and North America. I’ll first discuss the background of March’s main guest on the program, Dr Bill Hare, then run through some of the Four Corners content.

Dr Hare scored ten appearances — 620 words out of the 8100 — during 45 minutes, plus the final words on the episode. So who’s Dr Bill Hare? Just “the best climate lobbyist in the world”, as cited by Murdoch University.

For starters, and unmentioned by Four Corners, his main 16-year career (1992-2008) was as climate policy director and spokesman for Greenpeace International. To the Greenpeace fanatics, he was a “legend” in global climate politics,[1]  penning fiery Greenpeace polemics such as warning the top 100 US companies to reject President Bush’s climate policies within a week or “face the consequences” globally. He also accused Australia of behaving like “an international selfish brat”.  In 2002, he helped Greenpeace and similar groups start the Exxon Secrets website, described as “a chronicle of ExxonMobil’s efforts to corrupt the debate on global warming.” Greenpeace managed to dredge up $US30.9 million in donations by the company to alleged sceptic groups over 16 years, i.e. $US2m a year. The renewables industry currently involves investments of  $US1.5 trillion a year.

As a Greenpeace activist, he didn’t seem to fit the specs for the supposedly science-neutral, objective work of the IPCC authors (“humourless people in white coats” was how then PM Kevin Rudd described them). Well, whatever. Greenpeace boss Hare was author/reviewer and/or writer for the IPCC reports of 1995, 2001 and 2007, helping draft the latter’s key Summary for Policymakers. For the 2013 report he wore his hat from Potsdam’s   Institute for Climate Impact Research (PIK).

To add some spice, the IPCC crowd are the “gold standard” for science, as the ex-IPCC chair and now  accused sex-crimes perpetrator Rajendra Pachauri used to say. The Guardian also refers to “Dr Bill Hare” as a “top climate scientist”. So let’s check.  On his bio at his Climate Analytics business website, he’s described as “Dr (h.c.) Bill Hare”. The coy “h.c.” stands for “honoris causa”, and refers to an honorary doctorate  awarded in 2008 from his alma mater Murdoch University in WA. At his Linked In entry he lists a matriculation and leaving certificate from Kent Street Senior High, Perth, a  Murdoch  Bachelor of Science degree in Environmental Science and Physics (Double Major), and an Honors Degree in Physics (1979-82). His B.Sc (Hons) is also cited at his Potsdam site.

For his Climate Analytics a year ago, he  co-authored a paper   called “Western Australia’s Gas Gamble”. He describes himself there as “Dr Bill Hare”.

The UK Carbon Brief warmist information website refers to “Dr Bill Hare” as “bill-hare-hero”. There seems no end to his talents. In the book, The Winning of the Climate War by UK green-energy businessman Jeremy Leggett,[2] he gets a paean as a world-respected economics whizz:

Dr Bill Hare, an old colleague at Greenpeace, is the single most talented technical expert I have met in all my quarter century of climate campaigning. This is because he is both an accomplished atmospheric physicist and also expert enough in economics to engage the world authorities at that strange discipline and earn their respect…

Of course, one can be a great modern scientist without a Ph.D. ticket. Physicist/mathematician Freeman Dyson, with his Max Planck Medal, Enrico Fermi Award and showers of honorary doctorates, never earned a Ph.D. But Dyson has never described himself as Dr (h.c.) Freeman Dyson, let alone Dr Freeman Dyson.

Come to think of it, why was this Four Corners episode also a 97 per cent male bastion? Five anonymous women accounted for just 100 words out of 8100, plus March cited a thirty-word quote to trash-talk Coalition environment minister Melissa Price. Of twenty-seven named interviewees, Price was the only female. Hasn’t March heard of female climateers Dr Lesley Hughes, Dr Joelle Gergis or the Climate Council’s silver-tongued Amanda McKenzie? So much for ABC diversity policy.[3]

March was astute not to invite the intrepid Judith Sloan, whose smarts, if not edited out, would have punctured the entire episode. The other sceptic on the program, The Australian’s Chris Kenny, was allowed a total ten words and seven seconds. (That’s what I call tight editing). He managed to point out, just, that nothing Australia does will alter the global climate.

Returning now to Bill Hare B.Sc. (Hons), he transitioned in 2009 from Greenpeace to set up and run his non-profit Climate Analytics, which started with funding from the German federal Ministry for the Environment, Nature Conservation and Safety. The same department also funded Hare’s global warming  “PREVENT” lobbying unit at his Climate Analytics and PIK.

Hare is half of a double act with wife Dr Ursula Fuentes-Hutfilter  (Ph.D atmospheric science, Ludwig Maximilians University, Munich). She has been a key player for decades within the German Government’s climate negotiations and now-faltering energy-transition to renewables. They met at the Kyoto IPCC meeting in 1997. Her main job has been with the Federal Ministry for the Environment, Nature Conservation and Nuclear Safety. She was an author/reviewer for the fifth IPCC report. Currently, they are both adjunct professors[4] at Murdoch University, where she works on Asia-Pacific energy transformation policy. Hare maintains his links as visiting scientist with Potsdam (PIK).

Dr. Fuentes-Hutfilter is also leading a project under the Australian-German Energy Transition Research Hub, which aims to have sixty researchers. It is backed by the Department of Foreign Affairs and the German Education Ministry, plus Melbourne University and ANU, PIK and several other institutions. The Hub’s goals are energy market changes, low-carbon investment policies, negative emission technology and new trade and exports. “The global shift to a net-zero emissions economy presents genuine opportunities for Australia and Germany,” it claims.

One can see how entrenched the Potsdam (PIK) group now is in the Australian energy scene. PIK has its share of warming revolutionaries. Its loopy founder/director Hans-Joachim Schellnhuber in 2011 was boasting about his “plan for a  transformation of society” and “a new basis of our coexistence”. He advocated $US135 billion per year climate funding from the West to developing countries, compared with Paris’s modest   current prescription of only $US100 billion p.a. His deputy Ottmar Edenhofer a little earlier got a bit too frank and said that climate policy “has almost nothing to do any more with environmental protection” and “we redistribute de facto the world’s wealth by climate policy.” An economist, Edenhofer says his master plan for 75% renewables globally by 2050 would only cost “a mere twelve thousand billion dollars by 2030”.[5]

As for the content of the Four Corners program, it’s great if you still believe the planet faces by 2100 an existential crisis of scorchiness caused by human-caused CO2. A problem, however, is that in the past 20 years, global temperatures have barely risen[6] while CO2 emissions since 1998 (110b tonnes) were equivalent to nearly a third of all the human-caused CO2 emissions ever. Please explain.

The past 40 years’ warming rate, as measured by satellite, is equivalent to only 1.34degC per century.[7]  And the supposed “proof” of CO2 causation derives from comparisons of unvalidated crude climate models run with and without the purported CO2 impact. Reporter Stephanie March also seems oblivious that the all-important feedback effects from rising CO2 are lately estimated at about 1.7 times rather than the IPCC’s range of up to 4.5 times and the 31 CMIP5 models’ average of 3.1. If confirmed, the low CO2 sensitivity would scuttle the whole warming scare.

March built her  program around how Australia should meet its (voluntary) Paris pledges to cut emissions. She trots out with a straight face a plan for our 26 million belching cattle to live on low-methane seaweed.  In her innocence, she refers to CO2 throughout as “pollution”. Fact: Added CO2 has greened the planet to an area extent of 2.5 Australias and contributed to unparalleled and on-going agricultural productivity which continues to outpace population growth.

March’s talking head Professor Frank Jotzo (ANU) fretted that “the international community” will look down their noses at us if we don’t meet our Paris pledges, or get there only via Kyoto credits. Let me see: China, responsible for about 30 per cent of  global emissions, intends to keep raising them to 2030. India pledged nothing about its emission levels, only ‘emissions intensity’. Trump has pulled the US out of Paris while the US actually cuts emissions by switching to fracked gas. France relies on nuclear. German and British households are suffering hugely (a la South Australia) from their crazed energy policies and prices.[8] So who’s going to censure us? The Maldives? Gabon?[9] And even if all Paris signatories delivered on their toughest emission pledges costing multi-trillions, what would that do to global temperatures by 2100? According to Bjorn Lomborg, who used the IPCC’s own formulae, the temperature difference would be around 0.05 to 0.17degC cooler. Great!

Much of the episode involved renewable energy investors demanding more secure government targets, incentives and subsidies, i.e. risk-free profit. Climate virtue and bags of money make a heady mix. Steph March also badgered working-class guys at Oberon NSW about their V8 utes. (Why not badger greenies in Double Bay about their SUVs?). But bricklayer Brett was not easily patronised:

March: Do you see yourself ever buying an electric car?
Brett: No, no way in the world
March: Why not?
Brett: I couldn’t do it. I like me fuel. It would be weird. I’d have to have long hair and a man bun. I’ll pass.

Unmentioned by March was any estimate of the cost of Australia’s renewables “transition”. Former government scientist Dr Brian Fisher puts the Coalition’s plan for a 27 per cent emissions cut at a total $293 billion by 2030, and Labor’s 45 per cent cut at $1.2 trillion. Also unmentioned by March was the West’s Paris pledge to a half-trillion handout to the Third World from 2020-25. Such a disclosure would have  switched the audience to more realistic shows like Married at First Sight.

Dear Mr Thomas,
Thank you for your email regarding the recent Four Corners program on climate policy. I apologise for the delay in responding.
I am advised that Bill Hare has an Honorary Doctorate of Science awarded to him in 2008 Murdoch University for his work on climate change science and policy. Murdoch University itself refers to Bill Hare as ‘Dr’ in some of its publications.
It is not uncommon practice to refer to people with Honorary Doctorates as ‘Dr’. I understand this is often qualified with the reference (h.c). For the purpose of our program, we did not feel this was necessary as most viewers or readers would not be familiar with the term. I am happy to take your comments onboard should we interview Bill Hare again on Four Corners. I will also convey your comments to Laura Tingle.
Yours sincerely,
Sally Neighbour

[1]  Before Greenpeace he was a member of the Campaign Against Nuclear Energy, set up by Friends of the Earth, and  a research director for Australian Conservation Foundation.

[3] Four Corners also gave Dr John Hewson a slot.  I understand it is compulsory to feature Hewson on all ABC programs.

[5] Such views were no barrier to his role from 2008 to 2015 as co-chair of IPCC Working Group III “Mitigation of Climate Change”.

[7] Temperatures have fallen by 0.5degC in the past three years

[8] Last year 5 million Germans were in strife with power bills, with 344,000 households cut off. Germany gets nearly a third of power from wind and sun.

[10] The IPCC says the opposite