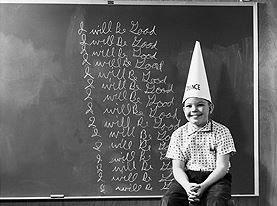 I read something the other day which suggested that intelligence was falling. I couldn’t find the article, which is always annoying, so turned to the internet. Judging by the first Google page, there seems to be a degree of consensus that IQ scores are on the way down in the developed world. God knows what the IQ scores are in the struggling world. A Norwegian study was cited by CNN in June 2018, for example, with the added comment that “similar studies in Denmark, Britain, France, the Netherlands, Finland and Estonia have demonstrated a similar downward trend in IQ scores.”

This all means, of course, that younger people, on average, are dafter than older people. It used to be that intelligence was linked to genes. However, the latest fad points to environmental factors like the emergence of the moronic addiction to electronic displays and social media and to the quality of teaching. Me, I don’t discount the brain-sapping effects of screen living or being taught by green-left dolts, but it seems obvious too that the higher survival rates of dullards, who would have otherwise perished because of poor hygiene, nutrition and medical care, does little for average IQs. In sum, if it is happening, it’s probably down to a mixture of environmental factors and genes.

But is it happening? Are the tests reliable? I am no longer sure that it is possible to undertake rigorous studies of intelligence without stratification of the subjects’ political allegiances. In other words, to my point, I wouldn’t be surprised if both older and younger people on the progressive Left were not (downward) biasing the outcome of recent testing.

I conjecture that young conservatives have retained the intelligence of their parents and grandparents. Whereas, those on the progressive Left whether older or younger have regressed. They are, in fact, on this account, more accurately termed ‘regressives’. Why would this be the case, you might ask?

This brings me to an article by Luke Slattery in last weekend’s Australian. He quoted an exasperated maths lecturer at Sydney University who lamented the diminishing capacity of undergraduates for, what she called, “linked thinking,” as distinct from thinking which is composed of disconnected bites. Ah, I thought, on reading the article, that can be matched precisely across to the progressive Left’s studious disregard for consequences. They almost never link their so called ‘virtuous’ proposals and actions with downstream consequences.

When you start thinking like this part of your brain must die. Think about it. Watch a hoon driving at twice the speed limit in an urban area. Do you think for a moment that potential consequences have entered his head? He is a moron, isn’t he? If you train your brain to ignore consequences as a matter of course then it seems to me, admittedly as a non-neurologist, that you will perforce become dumber. And thus, the progressive Left must be treated as a race apart when IQ testing is conducted.

You might think that this conclusion is a little hasty. If you do, read Theodore Dalrymple (aka Anthony Daniels in print in Quadrant magazine) on the subject of six-year-olds voting, also in last weekend’s Australian. He refers to the brain-challenged views of professor David Runciman, of Cambridge University, whose only objection it seems to young children voting is that too many of them will have been inculcated with inadmissible views from their unenlightened parents. To wit, parents who do not share the professor’s progressive views.

Notice something about the progressive Left. They are in favour of younger people voting. In lefty Scotland, callow sixteen-year-olds participated in the plebiscite to decide the fate of the 350-year-old union between England and Scotland. I dare say the result might have been different if only the fourteen and fifteen-year-olds had been eligible to vote. Watch this space.

Why is the progressive Left so much in favour of lowering the voting age? Because young people think exactly like them. Consequences figure lightly, if at all, in their decision-making. The human brain is not fully developed until the age of twenty-five. The younger you can get them the more likely they will believe in fairy stories in which unfortunate consequences are written out and only happy endings prevail.

Global warming is providing a case study in disconnected progressive-Left thinking. In this case they remain isolated from the future except when they contemplate Armageddon but also, as well, from the past. They occupy a mindset of certainty that climate change will wreak unimaginable havoc while being unwilling, mentally unable in fact, to face up to the adverse consequences and complete ineffectiveness of the countervailing actions that they support and promote.

As for the past, I have a photocopied and framed an article from Newsweek (April 28, 1975). Global cooling was de rigueur at the time. Scientists were worried about food supplies as the climate cooled and berated governments for their inactivity in the face of the coming catastrophe. Sound familiar? Meteorologists noted that “the slight drop in average temperatures [produces] large numbers of pressure centers in the upper atmosphere. These break up the smooth flow of westerly winds over temperate areas. The stagnant air produced in this way causes an increase in extremes of local weather such as droughts, floods extended dry spells, long freezes delayed monsoons…” Sound familiar?

It’s worth reading the whole article. For the connected mind it serves as a reminder that experts can be wrong and often are. Sometimes their suggestions are also beyond silly. How about melting the arctic ice cap by covering it with soot (circa 1975) or how about building windmills everywhere a scenic landscape can be despoiled (circa now). There is never a time when common sense can be put aside. Common sense does not work unless brains are attuned to carefully considering the past and weighing future consequences.

Unfortunately, we are living in a time when a growing number of children and students are being dumbed down and turned out into the world by teachers, lecturers and professors whose minds have been corrupted by disconnected thinking over a long period. The process is akin to communist re-education. Though it is undoubtedly worse than that. Those re-educated had their former mindsets to fall back on. I found an article in the Washington Post (1994) which covered the story of a particular South Vietnamese general held for twelve years in a communist re-education camp. He was asked whether he or any of his fellows had their mindsets altered. “No, not once,” he replied.

In contrast, children have no mindset of substance to fall back on. Give me a child for the first seven years and I’ll give you the man, so the Jesuits claimed. I don’t see much hope as schools and universities churn out teenagers and young adults with disconnected brains. They will simply think their mode of thinking is normal.

The result: the population density of progressive leftists will go on increasing. A continuously falling IQ will be one symptom. Feel-good policies divorced from reality will be another. Bear in mind that these people are not and never will be receptive to reason. Incapable of taking in and processing linked arguments, they might as well be aliens.

Except, ominously, the majority decides who’s alien and who’s not. So, parents succeeding in raising conservative (and thus mentally connected) offspring, despite all the odds, better teach them survival skills. Otherwise they face being sacrificed on the altar of consequence-free, politically-correct, thinking. The likes of which we can’t yet imagine.

Now that’s a happy thought for the New Year. Unless you believe, as Mr Micawber, that something will turn up. Call me an old-time religionist but I can’t believe that God will allow disconnected brains to predominate. I feel sure He would have wanted people to vote for the Gipper. Something is bound to turn up. Isn’t it? Surely?

The Battle is Over. The Bad Guys Won