Electoral predictions are often wrong and we can’t rely on polling to base our critiques of governments. But the latest Newspoll (4 September) shows the Coalition has a deficit of 47 to 53 after preferences and makes it almost certain that a government led by Malcolm Turnbull will lose the next election. That could be about a year away, but this is the nineteenth consecutive Newspoll in which the Turnbull government has trailed Labor in two-party terms. Importantly also, in this period a significant proportion of voters who have traditionally supported the Coalition has indicated their vote is now likely to move to “independent” parties, such as Cory Bernardi’s Australian Conservatives. Moreover, while Newspoll shows Turnbull as favoured PM over Bill Shorten (is that difficult), the rated performance of each is way down in the cellar of the low 30s.

Electoral deficits in Newspolls would likely reach 30 next February or March, the same number of such deficits Tony Abbott  reached when Turnbull succeeded in jostling him out of PM in September, 2015. Should Liberal Party members be prepared to wait that long for a replacement this time? Turnbull shows no sign of developing the capacity to handle the so-called conservatives within the party or to improve the policy objectives he seems to have adopted. I say “seems” because many of his stated objectives, such as “jobs and growth”, have not been accompanied by back-up specifics: rather the contrary, as reflected in the cartoon published by Mark Knight in the Herald Sun. 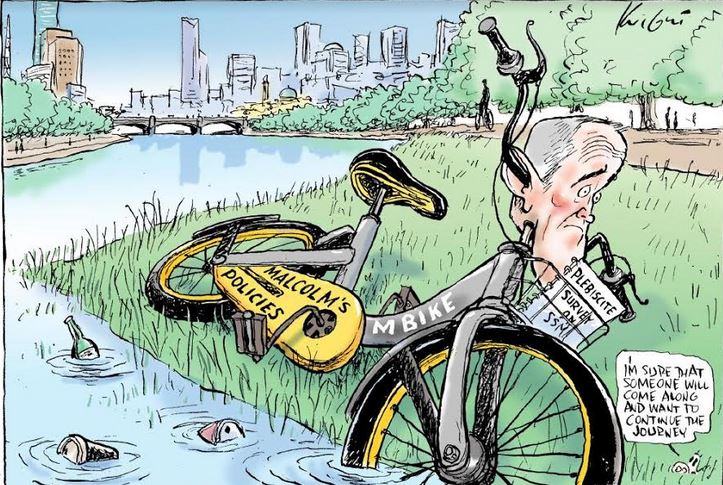 True, there are no signs, not yet, of anyone putting up a hand for his job. But a suicidal process surely can’t be maintained for long and a replacement, whoever that might be, must be given time to present objectives and policies before the election. This requires he be replaced before Christmas, perhaps straight after Parliament finishes its present term on December 7.

If none of the possible replacements emerge from within the ranks, the only realistic approach would be to ask Abbott to have a second try. While some will say his record as PM does not warrant a reprise, others disagree. Commentator Andrew Bolt, for instance, is adamant that Abbott is Liberals’ only hope. Recent articles by Abbott in The Australian also suggest he has developed sensible policy objectives in case he gets the call. In his September 7 article, “Heaven help Australia if Shorten gets the Keys”, Abbott makes no mention of Turnbull when warning “if the polls are right, Shorten’s going to be prime minister soon”. Abbott draws attention to policy areas which have arguably either been neglected by Turnbull or not addressed at all by him.

It is not possible here to examine major policy areas which need strengthening. But a vital one that cries out for attention is energy and the alarming increase in electricity prices, mainly as a result of the emissions-reductions policies adopted by both federal and state governments, and the associated targets for inefficient and unreliable renewable. The handling — mis-handling, actually — of all this by Turnbull illustrates his inability to recognise the fundamentals and to tailor Australia’s policies to maximise our national interests.

Reflecting his ad hoc approach to policy making, Turnbull has now recognised the adverse polling effect of the increases in electricity prices and has decided to adopt a policy of keeping coal-fired generators running until 2027. How ironic that, despite his long-standing support for ceasing to use coal-fired electricity and reducing emissions of CO2, Turnbull has reversed engines, at least temporarily. That back-pedalling displays a  lack of confidence in himself and his advisers.

Instead of commissioning a report on achievable emission-reduction targets from Alan Finkel, Turnbull should have commissioned a review of climate policy and the extent to which coal-fired generators needed realistically to be reduced over the next 25 years, if at all. Such a review, now urgently needed, would not only advise on the minimisation of adverse effects domestically but would also advise on the likely extent to which other countries will be reducing their emissions. It would include experts who are known sceptics as well as those who are not.

Relevant here are the facts missing from explanations of why Australia signed up at Paris 2015 to a 26%-28% reduction in emissions by 2030 (compared to 2005) while the two biggest emitters, China and India, have no  requirements and countries such as Russia and South Korea agreed only to reductions of around 10%. Also relevant to determining our policy is the miniscule contribution Australia makes to world emissions (a little over 1%), not to mention that there has been no substantive increase in temperatures over the past 20 years or so even though the supposed drivers of temperature increases – CO2 emissions –have grown at a strong pace. Yet according to entirely credible estimates, by 2030 taxpayers are likely to be paying pay more than $60 billion in renewable energy subsidies.

Relevant here is that Abbott has sceptical views and in early October will be addressing a UK think tank on the approach that should be adopted in deciding a climate policy in Australia’s interests. He originally used the threat of a bipartisan carbon tax to persuade parliamentary Liberals to replace Turnbull. A second try?

Coalition of the Craven