I suppose this should be appearing under my real name, but it’s just too risky, and from my perspective that is the saddest of many sad things to arise from this entirely counterproductive fracas about same-sex marriage, plebiscites and postal surveys. If you are not gay perhaps you don’t get what is going on. I am gay, have always been gay, and will die gay. It is not an orientation about which I had the slightest choice, and until just recently I believed myself to be living in an era which, if you are in your seventies like me, you thought would never, could never, come about.

Until attitudes changed I lived a lie. God forgive me for a hypocrite, but there was a time when I even told poofter jokes to help keep my secret. Then the flaming young things went to the barricades and over a decade or two the fear of exposure that stalked me and so many others lifted and vanished. I remember once walking out of the bar of the Graham Hotel on Swanston Street in Melbourne in about 1972 and bumping into a woman I worked with. The Graham was in those days a well-known gay hangout; to be seen there was to be instantly convicted of being a sexual outlaw by the standard of the time. Would she gossip about me at work? Would I be fired, which they could do in those days? So far as I know she never said a word to anyone, which supports my sanguine view of humanity – we’re most of us, gay or straight, basically decent people.

Most, but not all. What pains me greatly is that it is the members of my “gay community” who are now doing their utmost to bring homosexuality into ill repute. It’s the reason I am using a pseudonym. Disagree with the noisy gay goosesteppers, as Bill Leak so accurately drew them, and you risk attack. At a social gathering about a month ago I ventured the view that gay marriage would be nice but no big deal. Two members of the younger crowd immediately gave me a hard time, although now that I think about it, being called an ‘Aunty Tom’ is rather funny. 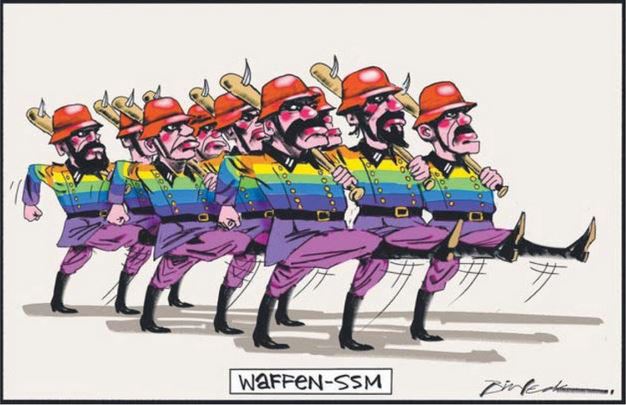 Do those dinner party critics of mine read the papers and see how Melbourne is being hit with a crime wave – push-in robberies, carjackings, you name it – and I think to myself that these are far more important things that need fixing. Or I look at my electricity bill and wonder with my partner how just two of us and a dog (not a cocker spaniel, Mr Keating) could run up a quarterly bill of almost $800. Public safety, affordable power, the very future of this country — they are important issues whether you are LGBTQI or straight as a billiard cue. How much support do the shriekers think they gained by making a target of Margaret Court?

Nevertheless, when the same-sex marriage thing first came back to life in recent months, I thought ‘Why not?’ Now I wish the whole subject would go away before permanent damage is done.

Consider it this way. If same-sex marriage becomes law by legislative fiat, those who oppose will rightly conclude that they were robbed of their promised right to decide the matter in the voting booth. If same-sex marriage isn’t passed into law, noisy activists will get even louder and alienate even more people. If you are gay, and by that I mean quietly gay like the straight population is quietly heterosexual, not making it the centrepiece of how you present to the world, neither prospect is anything but worrying.

I don’t want to be represented by the Roz Wards of this world. I don’t want little children being introduced to the ‘gay lifestyle’ in the classroom, let alone “gender fluidity”, under the pretense of an “anti-bullying campaign”. These are things you can only work out for yourself, and being nudged in one direction while being told it is the only direction that you can take is so wrong it makes me profoundly sad. As a boy I would dress in my mother’s clothes sometimes, but I didn’t become a transsexual when I grew up. What might have happened if some teacher had said to me ‘that’s what you are and I’m going to make sure that is way you will be forever’.

That I would be using a pseudonym to write this is proof of the fear I have in my heart. Tony Abbott has said that a ‘no’ vote in the postal plebiscite would send a message to bullies. He’s right about that, but not the bullies of old, the ones who could get you fired, throw you in the Yarra and make you live in fear. Now the fear is of being attacked, harassed and held up to public ridicule by gay activists and their media allies. Don’t the media realise that the loudest ones don’t represent gays like me? If journalists really cared about the issue, not the furor, they would look beyond Roz Ward et al.

Would I like to see gay marriage at some point in time? Yes, I would. But in the grand scheme of things it is a triviality, promising nothing that isn’t already available under the rubric “civil union”.

If the promised plebiscite had gone ahead without all this fuss and bother I believe it would have passed and passed easily. But not now, not when voters have been insulted, shouted down and abused for a homophobia that exists more in activists’ imaginations than it does in real life.

Noel Gardner is the pseudonym of a retired professional. He and his partner have made their lives together for more than three decades

The Arrogant and Inviolate ABC

The Veiled Fate of Europe