In Bill Leak’s last cartoon in The Australian (below) he has Rob Stokes, the NSW minister for education, in front of Punchbowl Boys High School, severed head in hand, explaining to an interviewer that “boys will be boys.” Getting to the nub of the matter is the cartoonist’s art. Bill Leak was a peerless grandmaster of it.

I was at the CIS function last Wednesday evening for the launch of his book Trigger Warning, which contains his cartoons over the year 2016. Partway through his speech, he was stopped in his tracks by Sir Les Patterson. If you are going to be pushed off stage I can’t think of any more formidable person to do it than Sir Les; though perhaps Dame Edna would come close. In any event, Bill took it in his stride: brilliant cartoonist interrupted by iconic entertainer. Ending is hard but I can’t think of a much better sign-off than a book launch, Sir Les and a final, cutting cartoon.

I met Bill only twice but on both occasions he told me how much he enjoyed reading Quadrant. Like me he was a convert from the dark side. I don’t know, but I tend to have more affinity with those who’ve seen the light than with those who start out that way. Being youthful and conservative doesn’t always sit right somehow. Aren’t the young supposed to be, at the least, a touch radical? Mind you, I think I’m living in the past when being left had more of a respectable and honourable cloth cap about it.

This brings me back to Bill. Here is someone who had to pick up sticks and move home for bravely drawing a picture of Mohammed. Bravely, because Islamic barbarians have a record of killing people for doing just that; as they threatened to do on this occasion. My God, when exactly did we arrive at the point in Australia of ho-humming this alien barbarity in our very midst?

Having his book provides an invaluable reminder of a small section of Bill’s candid and confronting cartoons. They are a vivid commentary on the debasement and defilement of our political culture. Cloth-cap socialists of old could never have imagined the new battle lines. 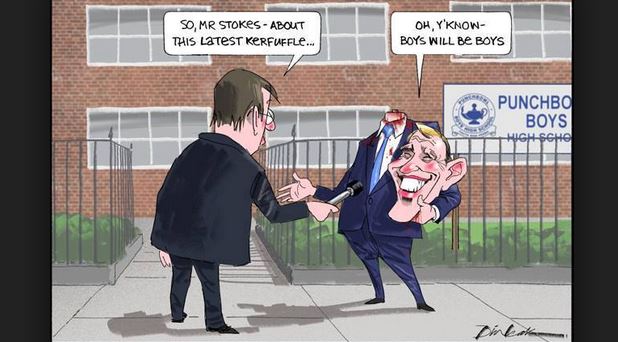 No wonder he switched sides. It is beyond me that so many otherwise sensible people, drawn to the left out of compassion, remain tribally locked into a creepy, anti-worker, anti-Western, movement. What’s going on? I simply don’t know. I only know that it is going on and it is bringing us down.

I hope I am missing something in saying this; but I think Bill Leak will be sorely missed. Even those few conservative commentators that we have in Australia are pale imitations of Bill. This is not entirely their fault. Cartoonists can get away with things if, like Bill, they are brave enough to face up to the chattering classes, the politically correct, the cultural relativists, the post-modern moral guardians, the globalists, the ABC,  green fascists, Islamists, Islamic apologists, Tim Soutphommasane and Gillian Triggs.

“No, no, Mister Headmaster, my fault entirely! I’ll come back later when you’re not so busy,” says a safe schools kit toting Dick Di Natale, as a young woman is in process of being stoned (May 19). Now, exactly how can you describe that picture in prose without stepping out of bounds? To say it again, Bill Leak will be missed, when there seem to be so few warriors prepared to risk battling the dark side without quarter.

China Matters: How to Buy Friends and Influence Policy