New Zealand-born David Low (1891-1963) arrived in Sydney in 1911 to work on The Bulletin. During the First World War he became a relentless critic of Prime Minister Billy Hughes and his attempts to impose conscription. Low went on to a career in London newspapers from the 1920s to the 1940s. His satires of the rise of fascism in the 1930s, of the policy of appeasing Germany, and his caricatures of Stalin, Hitler and Mussolini eventually made him the most celebrated cartoonist in the English-speaking world.

In 1937, Nazi propagandist Joseph Goebbels asked the British government to curb Low’s work because it was damaging Anglo-German relations. After the war Low found his name in The Black Book, the list of people the Nazis would put to death had they invaded Britain.

Bill Leak’s war was the culture war of political correctness and interest group politics. While nowhere near as violent as fascism or communism, Bill recognised the modern left was attempting to impose an equally insidious form of totalitarian thinking that sought to remake Western society in its own warped image of human nature.

Like Low, Bill was subject to serious death threats from his opponents. Not long after the Charlie Hebdo massacre in Paris in January, 2015, Bill became a target of Islamic State in Syria, which issued a fatwa against him.

“At the time,” he writes in his new collection of cartoons, Trigger Warning (order it here), “I was still naïve enough to believe this was the sort of thing that could never happen in Australia, a country that enjoys the privileges of hard-won freedoms and boasts one of the world’s longest running democracies. As a proud member of that free society I felt I had the right to attack these trogdolytes with the only weapon at my disposal, ridicule. As a cartoonist, I felt duty bound to do it, so I too drew a cartoon that features an image of Mohammed.”

Bill said that at first he was unable to believe the warning about the fatwa, but the Australian police convinced him by showing Islamic Sate websites and chat rooms that featured exhortations from jihadists to their “fellow mujahedeen” in Australia to hunt him down and kill him. As a result, he decided to move himself and his family away from Sydney to a house in the country. He said he had to “start getting used to living within the constraints of extreme security measures in order to ensure my own, and my family’s, safety.”

But he never wavered in what he saw was the duty of the cartoonist. In November last year, when he created a perfectly accurate if uncomfortable portrait of family relations in remote Aboriginal communities, he soon found that as well as the Islamic mujahedeen, he had become a legal target of Gillian Triggs and her Orwellian Human Rights Commission. Though outwardly he remained his amiable gregarious self, there is no doubt that the pressure of this harassment from both these directions of the totalitarian Left contributed to the health crisis that killed him.

The most famous cartoon by David Low, titled Rendezvous (above)was published in the Evening Standard on September 20, 1939, only days after Hitler and Stalin, at the time allies through a “non-aggression pact”, both invaded Poland. The two dictators, meeting on a bloody battlefield, doff their hats and bow to one another, mocking their critics by acknowledging the other as “the scum of the earth” and “the bloody assassin of the workers”. 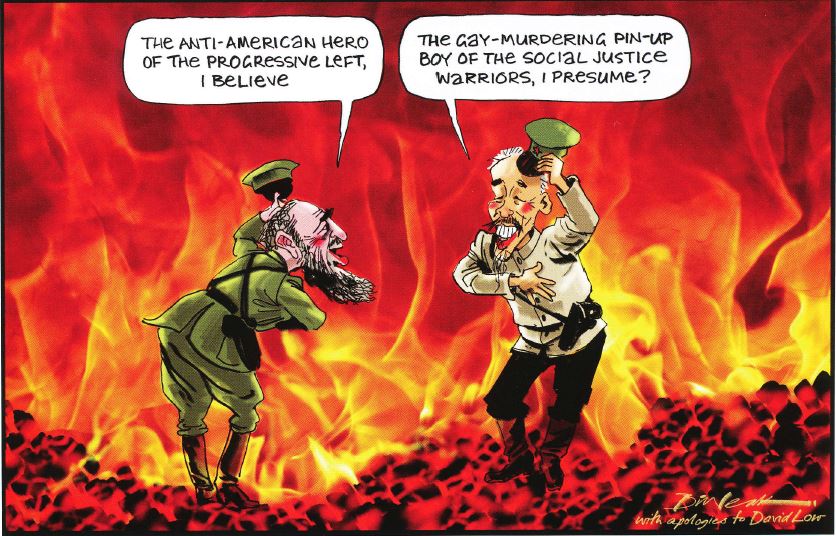 Bill was not only a great admirer of Low’s work but felt enough affinity to replicate Rendezvous in one of his own best cartoons (above). On the death of Fidel Castro in November last year, Bill portrayed Castro in Hell meeting Ho Chi Minh. They doff their hats and bow to one another. Castro says: “The anti-American hero of the progressive left, I believe”. Ho replies, “The gay-murdering pin-up boy of the social justice warriors, I presume?” Underneath Bill’s signature, the cartoon says “with apologies to David Low”. “Apologies” was probably the wrong word. It was really Bill’s homage to David Low, from one great artist to another.

Vale Bill Leak. We were lucky to live at the same time as you, and in a country made so much better by your dedication to its deepest ideals.

Keith Windschuttle is the editor of Quadrant. His most recent book is The Breakup of Australia: the Real Agenda Behind Aboriginal Recognition and can be purchased here

The Slam-Dunk Case Against 18C