Chris Berg (left), 33, is the mop-topped, nerdy Wunderkind at the Institute of Public Affairs. He cranks out books on personal liberty that demonstrate startling erudition and a formidable grasp of the history of ideas. Concurrently, he has finished a PhD thesis on Australia’s financial deregulation and more than a score of submissions to parliaments, plus think-tank tracts. He has been a regular gadfly guest – surprisingly – on ABC’s The Drum and an opinion-page contributor to The Sunday Age.

Last week saw the launch of his book The Libertarian Alternative (MUP, 225pp, paperback $32.99 and ebook $14.99). He defines libertarianism as the political philosophy of liberty – the idea that people know better how to live their lives than governments. As he describes it, libertarians want small government dedicated to enforcing contracts, protecting our security, and otherwise getting out of the way. The book applies libertarian ideas on everything from trade and inequality, the environment, free speech, and the nanny state.

The book’s most contentious bit – especially now – is his urging for people to not only trade freely across borders but move their families across too, with legal immigration quotas to be seriously expanded.

So who is this Chris Berg, IPA Senior Fellow, producer of this torrent of classy print?

He says, “I love writing and my productivity strategy is to write at home from 5 am to 7am every single day and get 500-1000 words done. Over time it mounts up to a lot of stuff and ideas.”

Q: How do you relax?
A: With my family, wife Bronwyn Hinz, and kids, Walter, 2, and Leonard, 4. Bronwyn works on education policy for the Mitchell Institute think-tank at Victoria University. She used to be a staffer for Labor Senator Kim Carr. We have plenty to talk about at home!

Q: Did you get your ideological bent from your parents?
A: No, they’re a smart but not particularly political couple. My mother, Sue, was a maternity- and child-health nurse and dad, Ian, was an insurance executive. I went to Camberwell Grammar, where people thought I came across perhaps as a bit of a Leftie. I firmed up my political ideas digging around the internet while studying at Melbourne Uni  and following things up in books. I never got into student politics, a field that gets a lot of people into a lot of trouble. I never started pinkish, and I’ve never been interested in political teams, only in discovering ideas and where they lead.

Q: What’s next?
A: I’m hoping to convert my Ph.D. thesis on Australian banking history into a more readable book. There’s more action in that history than you’d guess. When a bank collapses, for example, there are fascinating human stories of the enormous impacts that collapse brings about. And if we dig enough into the history of even the driest economic policies, we always find rich stories of politics and vested interests at work.

Q: How do you, as an IPA stalwart, get such a good run on the ABC’s Drum and The Sunday Age?
A: “I’ve always found the editors I work with to be eager to run alternative views. I have great relationships with these editors — we’re all friends — and I’ve always found success pitching free-market stories to them.

Q: I can’t follow your book’s argument that globally, people should be welcome to migrate across borders to improve their living standards and benefit their new host countries. Are you suggesting we take a million Syrians or what?
A: No, I’m arguing theoretically for more open borders, but only at the margin. I’d welcome much higher migration here of low-skilled people. 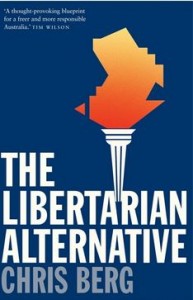 Q: But how many more? You’re not going to squib the question like Kerry O’Brien did, are you?
A: It’s very clear there are some serious integration issues involving certain communities. Those integration problems must be solved first, which is why I’m not urging wide-open borders but gradual opening.  Migration here is heavily restricted and wrongly so. But now that the government has secured the borders against illegal immigration, there is scope to start talking seriously about much more legal migration.

There’s a serious problem with current treatment of the intake of genuine refugees. They are treated as needing continuing protection so they go straight onto the welfare system, which is terrible for integration and for community cohesion. Instead, they need to get into jobs and join the community.

Q: Your libertarian shtick seems to argue for reduced anti-terror security measures.  Are you happy for the community to suffer more risk?
A: No, the issue is whether the plethora of misguided security measures is actually adding to terror risk, not reducing it, and meanwhile harming our freedoms.  For example, when ASIO asks for more power to get and keep metadata on people, the government hands the same power to non-security bodies like the ACCC and ASIC.

Q: You’re pretty fierce against growth of regulations by governments?
A: Australians have to obey more than 100,000 pages of federal law, plus the masses of state and local demands. These can be absurd. In NSW, some councils are refusing planning permits to businesses that use trans-fats in cooking. A small business here typically spends $30,000 a year complying with red tape, and the total cost of red tape is at least $100 billion a year.

Q: Your book attacks all the anti-discrimination legislation now being enforced here?
A: Australian law is now forcing us to associate with, and not associate with, various groups and individuals. Freedom of association is a fundamental right. One of the examples I bring up in the book is an innovative travel agent, Erin Maitland, who wanted to run women-only tours but fell foul of anti-discrimination law. That’s absurd, and so are laws forcing single-sex social clubs to integrate.

Q: Out of a mark of 10 for excellence, what score would you give Abbott and Turnbull?
A: I’d give both a seven. We and conservatives generally are treating both men more harshly than we treated Howard, partly because the economy is performing less well. Politics is the art of compromise. I’ve been highly critical of both Tony Abbott and Malcolm Turnbull, but I understand that they don’t see their main role as pleasing ideologues like myself.

Q: Why do you claim the Left/Right dichotomy is now meaningless?
A: Classical liberals, conservatives, even Labor and Greens people will sympathise with various aspects of libertarianism. I sometimes find myself agreeing with the Greens on, for instance, gay marriage, metadata retention and privacy. But libertarians are also just as concerned to protect religious freedom, such as ensuring people can object to participating in marriage service that does not conform to their religious convictions. There have been a serious of cases of anti-discrimination law being used against people who objected to baking a wedding cake for a gay couple, particularly in the United States. We don’t want to introduce more liberty for one group and simultaneously take away liberty from another.

Q: Do you have philosophical brawls within the IPA?
A: No, because all our differences are still within the IPA’s ambit of free-market economics, freedom of speech and individual liberty.

Q: The IPA is having a strong 2016?
A: Absolutely. The IPA is now larger than it has ever been, and has a stronger national footprint, than ever. We have 3,700 members across the country. Our young members’ program now has 500 people engaging with the ideas of the free market and liberty. Our funding this year is projected to be around $4 million.  We’re now engaging in the public debate, not just in newspapers but online, on social media, through web-only video, and I think we can see the powerful impact that these approaches are starting to have.

Q: Isn’t it tedious writing all those IPA submissions to governments?
A: No, it’s really productive. You get the chance to get your evidence, written and often in person, directly to law-makers – to challenge their views, to present contrary evidence, and to make the case for smaller government straightforwardly.”

Ramadan, It’s All the Rage