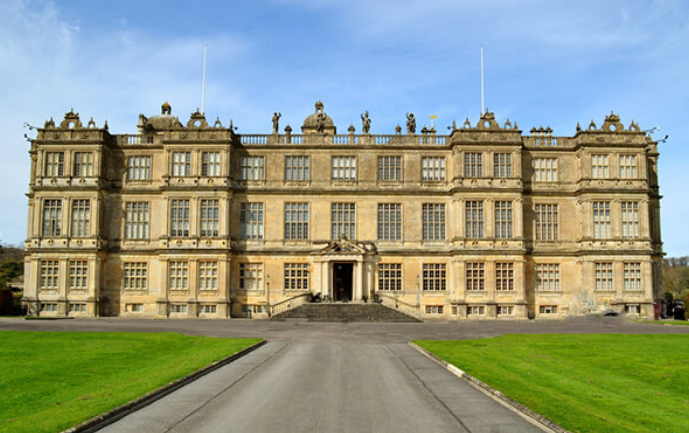 As many face isolation and loneliness, does it help to think that a marquess and chatelain of one of the finest houses in England, knew and felt this as keenly as any commoner, even in pre-Covid days? Valé the “Loins of Longleat”, Alexander Thynn, 7th Marquess of Bath, who for decades ensured the pairing of ‘eccentric’ with ‘peer’, keeping himself and his great Elizabethan house in the headlines. Having passed away in early April at the age of 87, he was among the first coroneted victims of coronavirus (Could he have caught it from one of his lions?)

Elizabeth I was so anxious to see Longleat she had a courtier write to Sir John Thynne  in 1574 asking to be invited. Five centuries later, her namesake Elizabeth II was also a guest, attending a Thynne family wedding — the family name took an ‘e’ in those days — where the cake was said to be laced with LSD. ERII was observed to exhibit no side effects, so it is presumed she had declined but had let them eat cake. 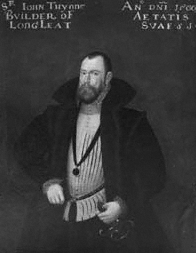 , during the dissolution of the monasteries, twenty-five-year-old John Thynne (left) conveniently acquired, for the tidy sum of £53, the priory along the river of Long Leat. Sir John began as a clerk in the kitchens of the hungry Henry VIII and prospered. In 1547 he was knighted for fighting in the battle of Pinkie Cleugh against the Scots.

Sir John began construction but after a fire in 1567 he rebuilt what, along with Hardwick Hall in Derbyshire, became one of great prodigy houses of the Elizabethan era. It was still unfinished at the time of Elizabeth I’s visit and, indeed, Sir John’s death in 1580, but on its completion renowned as ‘the first well-built house in England’.

Through marriage, public service, loyalty and guile, the Thynnes acquired, successively, a baronetcy, a viscountcy and in 1789, the Marquessate of Bath. By the end of the nineteenth century, work under the 2nd and 4th marquesses transformed the interior of Longleat (below) into an extravagantly Victorian vision of an Italianate palace. But by 1946 the ravages of wartime occupation, the death-watch beetle and death duties had laid Longleat low. 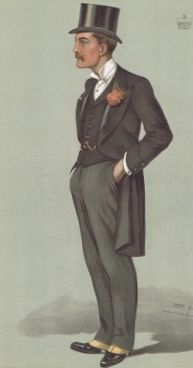 By the late 1930s, the 5th Marquess, Thomas (right), Knight of the Garter, a Lord Lieutenant, and former Master of the Horse, was obviously playing his part. But Longleat was not faring well and had been put on a list by the National Trust as a country house worth saving. So, in the summer of 1936, the Trust sent young James Lees-Milne to meet the marquess. In one of the best set-pieces (of many) in his diaries, he recorded his visit:

Old Lord Bath, the most distinguished and courteous of patricians, received me a in a frockcoat. At the conclusion of a fruitless interview he rang the bell and ordered that my motor-car be brought round. He insisted on accompanying me to the front door. The steps to the drive were flanked on either side by a row of footmen in livery. In place of my uniformed chauffeur an extra footman wheeled my bicycle to the front of the steps. I shook my host’s hand, descended the perron and mounted. At the end of a straight stretch of drive ….. I looked back for a last view of the glorious façade. Lord Bath, attended by a posse of open-mouthed and doubtless disdainful servitors, was in the old world manner of true hospitality still standing at the top of the steps until his guest was out of sight.

His decision not to relinquish Longleat would be justified by the acumen and industry of his son and grandson. In 1946, the 5th Marquess’s son, Henry, succeeded. Longleat, having survived wartime occupation by the Royal School for Officers’ Daughters, death duties and the death-watch beetle, was restored and opened for half-crown a head by Henry and his Bright-Young-Thing wife, the Hon Daphne Vivian, a clever, charismatic beauty but disapproved of by her father-in-law as one of ‘the mad Vivians’.

After a weekend at Longleat in 1948, Evelyn Waugh wrote to his friend Nancy Mitford,

Frightfully noisy and drunken. Daphne keeping me up until 3.30 every night, and the children riding bicycles round the house with loud cries from 6.30. No sleep. Jazz all day. Henry at meals reading the most disgusting parts of Malinowski’s Sexual Life of the Savages (and goodness they are disgusting) aloud to his 18-year-old daughter.

In the mid-Fifties, having recently dined with Alexander, Waugh wrote to Daphne, by then divorced and remarried and known as Daphne Fielding:

…I met your boy Weymouth, he came to a sad little dinner at Captain Bennett’s hotel before a ball and I think he is the most enchanting creature of either sex I have met for twenty years. I didn’t know who he was but a lot of dreadful looking men with long hair were saying how do you do to me and then I saw his mother’s lovely mad eyes and I said what cocktail and he said gin & tonic. That was really all I saw of him, but goodness I fell in love….

In 1966, with circus scion Jimmy Chipperfield, Henry (below) brought the king of beasts to Longleat, saying “If you feed a lion he will be OK.” Feeding them half a bullock’s head every day, except Sunday, he quipped, “I suppose that’s a throwback to when they ate Christians once a week.” 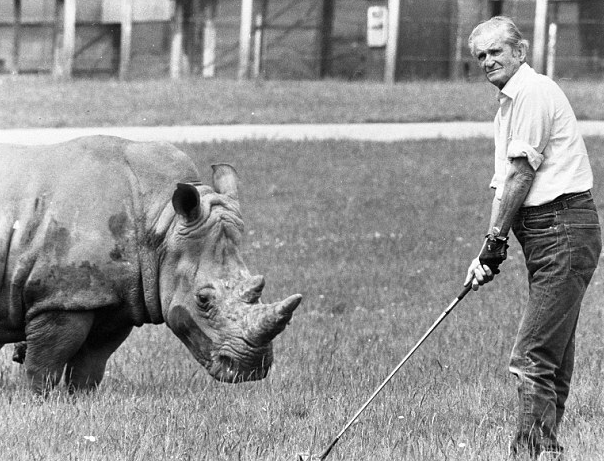 These days, as you take one of the long drives into Longleat, set low in the Wiltshire countryside, the sight of the great, square, golden house, especially on a late autumn afternoon, is breath-taking.  The parkland by Capability Brown complements this magnificence. Not visible from here, the Safari Park is now also home to tigers, elephants, giraffes, rhinos, sea-lions, serpents, marmosets and a silverback gorilla. Deer can be fed through your open window, while monkeys, famed for their fondness for windscreen wipers, clamber over your car.

But the wildest cat in the park would be Henry and Daphne’s lanky son, Alexander (below in 2002). In floral waistcoat, velvet slippers, velvet trousers and cap, a long grey beard under rosy cheeks & beady eyes, he looked as much ancient hippy as old pirate. He became an almost bigger attraction than the 10,000-acre estate. 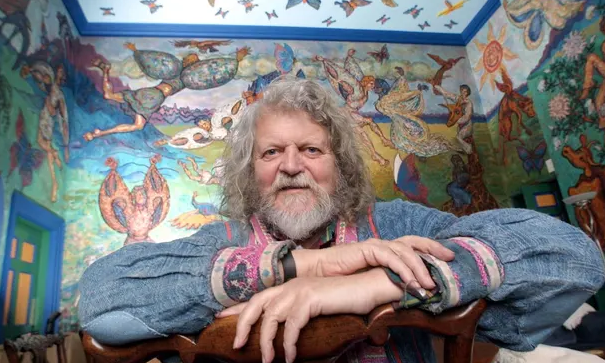 But he wasn’t always like that. Young Alexander (from 1946, Viscount Weymouth), had followed the traditional route: Eton (a member of Pop), the Life Guards, Oxford (president of the Bullingdon), before going to Paris to paint. There, in the City of Light, something happened – he converted to polygyny, pantheism, and pretty well everything that would annoy his father.

The house has magnificent reception rooms on the ground floor, seven of them libraries with the finest collection of books in private hands in Europe. Great state rooms grace the first floor with ceilings by the Victorian JG Crace paying homage to the school of Titian, Rome’s Palazzo Massimo and St Mark’s in Venice. The house is filled with Dutch old masters, Boulle furniture, Flemish cabinets and tapestries while 150 ancestral portraits intermingle with 69 paintings of the free-loving Alexander’s 75 ‘wifelets’, many installed in cottages scattered about the estate. 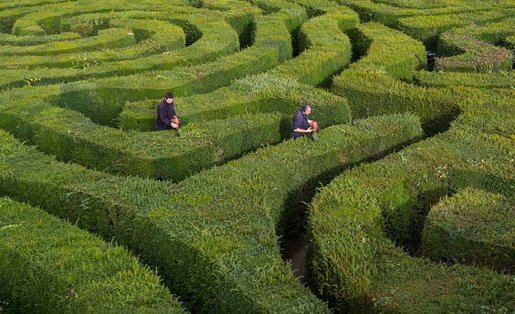 No idle aristocrat, he proved an astute manager of the estate but also covered a third of the house with murals depicting his view of life and love. When he first exhibited them in 1973 The Times described them as ‘of fathomless significance … sub-Freudian phantasmagoria of vividly coloured bas reliefs of creatures…’ Lord Christopher compared them to ‘pornographic pizza’. There is the Kama Sutra bedroom and the drawing room plastered with spermatozoon ‘Ages of Man’ murals – as bewildering as the hedge maze (right) outside, the world’s biggest. Pre-Google Maps, it could take 45 minutes to solve.

Another mystery produced some surprising results. DNA tests were carried out on local residents to look for descendants of Cheddar Man, the 9,000-year-old skeleton found on Bath land in the Cheddar Caves in the 5th 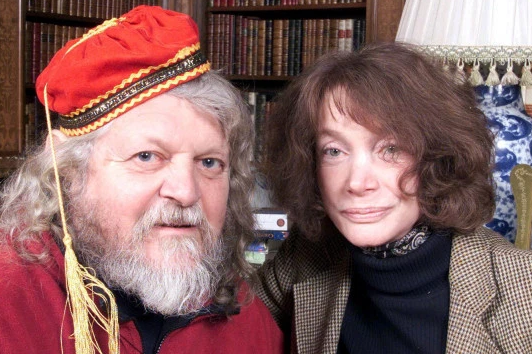 Marquess’s time. While Longleat’s butler was found to be descended from the oldest community in Europe, Alexander was delighted to learn his DNA matched that of a convicted murderer.

In 1969, he married Hungarian-born Anna Gyarmathy, an actress, also known as Anna Gael (left). It was a love match but, as was Alexander’s way, it was an unconventional arrangement, Anna being required to be with child before Alexander would marry her. Longleat would be her second home, the children to be brought up at Longleat and she could see them whenever she wanted. Lady Lenka was born in 1969 and the heir, Ceawlin (now the 8th Marquess) in 1974. Both children were educated at comprehensive school, but Ceawlin dipped into his trust fund to attend the liberal, independent Bedales in Hampshire. Anna lived in Paris and became a journalist, visiting Longleat one weekend every month. Alexander had wanted, he said, “a wider sense of family”. Despite the 75 wifelets, Alexander only had cause to acknowledge one other child, a daughter born in about 2000. In another departure from tradition, he dropped the ‘e’ from his family name, to mirror the correct pronunciation of Thynne.

A biography The Marquess of Bath: Lord of Love (2010) by Nesta Wyn Ellis attempted to understand the man behind the dandified, highly-sexed Worzell Gummidge. He apparently felt unloved as a child, and remained ‘not sure what love feels like’. He never forgave his mother for her wartime affairs; nor his father for beating him for washing a dog in the kitchen. Ms Ellis concluded, ‘He has so far failed to find that cosiness for which he yearns.’ Those who knew him considered him kind and fun but often in his last years, for all his drawing rooms, art and acres, he was lonely.

But Alexander Thynne’s legacy endures. Longleat – a triumphant symbol of aristocratic tenacity and English eccentricity, where the laws of the jungle and primogeniture both prevail.

Ukraine’s Song Of The Supine

The Bafflegab of the West’s ‘Dhimmi Wits’