How can Japan be sure that it is going to be attacked by China?  Well, China keeps telling Japan that it will do just that.  Consider this detail from Beijing’s military parade on 3rd September last year:

The military parade thus started with the People’s Liberation Army (PLA) National Flag Guard marching 121 heavy steps to the flag pole at the center of Tiananmen Square, reminding Japan the number of years the Chinese have been in waiting since 1894 for “appropriate” reparations and for an expression of regret.

Further, from head of US Pacific Command, Admiral Harry Harris

the Chinese Coast Guard continues to build a mammoth ‘cutter’ displacing 12,500 tons — a quarter more than a US Arleigh Burke destroyer — with a bow reinforced for ramming. Since the Chinese Coast Guard has played aggressive bad cop to the PLA Navy’s good cop in disputed waters, the construction of such a ship suggests Philippine, Vietnamese, or Japanese coast guard vessels are going to take some hard hits in the near future.

The bases China built in the Spratlys have made it easier to defeat China than if they didn’t exist. To put that into context, there are two strategic concepts for defeating Chinese aggression. The first is Air-Sea Battle, in the vein of Air-Land Battle of the European theatre, now renamed Joint Concept for Access and Maneuver in the Global Commons. This is the traditional concept of destroying the enemy by destroying his centre of gravity, in this case killing people and breaking things on the Chinese mainland. That is an undertaking not to be taken lightly.

The second strategic approach is Offshore Control.  In this second concept, nobody sets foot on the Chinese mainland. Instead, maritime cordons are established at the first and second island chains, and all Chinese shipping — commercial and military — is either sunk or taken as a war prize. Manilla Bay could be a perfect anchorage for holding a lot of these ships. There are a lot of similarly ideal anchorages throughout the Philippines.

This is where the seven new Chinese bases on seven new islands become useful. The South China Sea is a natural kill box, much the same as the Mediterranean proved to be during World War Two. Chinese aircraft and ships supporting their bases in the Spratlys would have to run the 1,000 km-long gauntlet from Hainan Island. If the Chinese aircraft and ships try to stay away from the Vietnamese on the western side, they make it easier for American aircraft to attack them from the east, coming and going. They will have a low survival rate. Now we get to the important bit. Attack on and occupation of the Chinese bases in the Spratlys will provide a defeat of Chinese land forces early in the war and this will be important psychologically in the Chinese accepting defeat. Those bases, shown on the following map, have just made China more vulnerable. 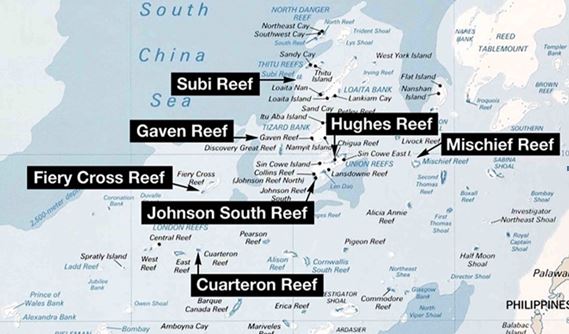 It will be a small-scale rerun of the island hopping of the Pacific strategy of World War Two. This campaign will start with the air base on Mischief Reef, 250 km west of Palawan. This puts it in range of US ATACMS missiles with their range of 300km. The US has some 2,000 of these in stock, according to best estimates. The amphibious attack on Mischief Reef will be associated with the suppression of the airfields on Subi Reef and Fiery Cross Reef. From Mischief Reef, it is then on to the airfield on Subi Reef and then all the other island bases can be rolled up. The Chinese navy and air force will exhaust themselves trying to protect these bases, which is a very good thing. Those Spratly bases are China’s point, and moment, of weakness.

David Archibald is the author of Australia’s Defence (Connor Court).