One hopes this new book by Professor Ian Plimer will shake the media from its gullible complacency and set it to confronting the gigantic fraud that the IPCC and hack scientists, avaricious governments, corrupted universities, and all the other self-interested parties riding the climate-change gravy train persist in preaching and promoting. While Plimer’s international best-seller, Heaven and Earth, did much to encourage scepticism and independent thought, the treatment it was meted by the liberal media, most notably at the shamelessly partisan ABC, won’t see me holding my breath.

Launched this month, Heaven and Hell is a frontal attack on the absurd, science-free claims peddled by, of all people, Pope Francis in his recent encyclical, Laudate ‘Si. As Plimer puts it, the documemnt is “science-free, an anti-development, anti-market enthusiastic embrace of global green left environmental ideology.”

Plimer goes straight for the jugular in demolishing the misrepresentations, false claims, erroneous predictions, fraudulent science and falsification of raw data –“a cardinal sin” — that represent the dubious basis for the papal pronouncement. The complete lack of any verified theory to explain, adequately and demonstrably, why and how carbon dioxide is heating the world is, of course, key to his critique.

What becomes quickly clear is that the encyclical is no better than a naïve reiteration of all the falsities beloved of what passes itself off as “environmental science”. One expects Tim Flannery and his like to prattle earnest nonsense, as they are heavily invested in warmism’s success, but this time it comes with the Vatican’s crossed-keys stamp of approval. The most unsettling revelation to be drawn from the encyclical is that Pope Francis knows little of economics and understands less. Wealth creation, trade and markets are beyond his ken. These are the engines that have lifted hundreds of millions out of poverty and you might imagine a Pope who otherwise advocates for the Third World’s poor would recognise them as forces for good. As Plimer correctly points out, the encyclical condemns the wretched of the earth to remain in that condition — consigned “to eternal poverty”, as Plimer puts it.

Plimer observes that the encyclical was published to coincide with the upcoming United Nations climate conference in Paris and that it adds the weight of papal endorsement to the catastrophist prophecies now flooding the media. The Pope asserts “the Church does not presume to settle scientific questions or replace politics”. This is manifestly untrue, as Plimer notes: “Of course he does. The encyclical is a document of public policy.”

The considerable resources the Vatican might have directed at a fair, impartial appraisal of climate science were instead narrowed to a selected panel of five ardent, deep-green “environmentalists”. One of their number was Hans Joachim Schellnhuber, chairman of the German Advisory Council on Global Change, who has boasted of “a master plan for the transformation of society”. This is to be achieved by “reducing CO2 emissions of fossil fuels to zero by 2070”. That’s fine and dandy, Herr Professor, but what about the world the rest of us inhabit?

To be reminded of the real world and real flesh-and-blood humanity, let’s look at what the world’s biggest carbon dioxide emitters are planning to bring to Paris: China is to double its emissions by 2030, by which time India expects to have tripled its own output. Russia is going for a 38% increase. Even in the EU, Germany and Poland are refusing to sign up. After Dohaha, Durbinned, Cancan’t and Copenflopen, expect the City of Light to be known when the latest gabfest ends as Parisisn’t.

Heaven and Hell goes through every aspect of the present state of climate science, the corruption, the falsification of raw data (aka fraud), and the complete failure of those much-vaunted climate models on which every other prediction is based, from which every other piece of research derives its rationale, and through which every scare-mongering scenario is trumpeted as indisputable fact via a tame media eager to be gulled. A central concern for Plimer is the doctrinal insistence that CO2 causes warming. Pointedly, he says:

The entire trillion dollar climate change industry rests on a single hypothetical assumption. The assumption is that emissions  of CO2 by humans drive global warming. To this day there is no scientific evidence to support this assumption. 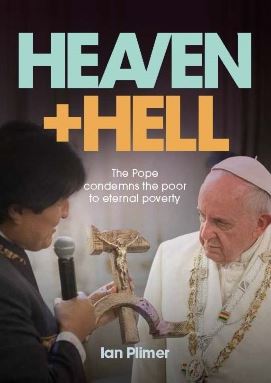 Whilst some sceptics concede a small influence of man-made CO2, all agree that the impact is negligible. How else does one explain the complete failure of the IPCC projections? The problem, as the IPCC itself admits, is that their models are just plain wrong, bearing no relationship to actual (non-“homogenised”) temperatures recorded by remote-sensing satellites, the most accurate means. Most in the science community now accept the temperature pause of the last nineteen years. This means that no first-year university student — not one teenager anywhere on Earth, for that matter — has ever experienced global warming in his or her  entire lifetime.

Plimer also discusses energy, coal, natural gas and oil, and details the appalling policy decisions by Western governments, their litany of unintended consequences, the extravagant waste of resources and hobbling of economies. This writer can only wonder at the reaction when books like Heaven and Hell are re-read — at the end of this century, say. At such a distance from today’s hysteria, people will surely smile as we now do at the Ancient Greeks’ faith in the improbable Ptolemaic epicycles that supposedly accounted for the movement of the planets.

There is a fascinating section in the book on the theory of acidification. Plimer demonstrates that it has extraordinarily long term stability due to a subtle balance of the system through  interaction with natural buffers of volcanic basalt rock and salinity. Plimer, a geologist,  knows rocks and he knows chemistry:

To use the word “acid” with reference to the oceans is fraudulent. The oceans have been alkaline for thousands of millions of years at times when there was far more CO2 in the atmosphere than at present. There is no reason  CO2 solubility in seawater would suddenly disobey all the rules of chemistry because we are emitting traces of a trace gas into the atmosphere.

Throughout the book the author lists many of the infamously false predictions and bogus items of “evidence” so familiar to Quadrant readers. This litany provokes incredulity and quiet rage as the reader is confronted time and again by the gullibility of journalists, whose professional responsibility it is to be better informed. That the global warming scam and scandal has flourished for as long as it has testifies to the scientific illiteracy and political leanings endemic in modern newsrooms. Lazy, incompetent and incurious, journalists’ support for warmism demonstrates just what a dim lot so many are: apart from the odd junket, they have not shared in the spoils and riches going to the warmists they have promoted at the expense of their own credibility and reputations.

Obligingly, the ABC has just this week presented us with another example of getting-the-story-totally-wrong. Reporting on a five-year CSIRO survey, the national broadcaster misrepresented the findings and insisted: “Three quarters of Australians believe climate change is real”. Well, not really. The CSIRO’s own data actually shows that a comfortable majority of the more than 5,000 respondents believe that anthropogenic warming is a complete crock. Moreover, the numbers of so-called sceptics have increased. All these numbers are there, clear as day, yet the ABC persisted in presenting them as if the wider public was an inner-city dinner party craving reassurance rather than hard fact.

In his final chapter, Plimer develops a moral case for social and economic development based on the use of cheap and abundant coal. This is what will raise standards of living in the poor world, he writes, presenting detailed statistics on how energy is used and why “sustainable” substitutes will never work. Basically, Plimer has penned a primer on the Industrial Revolution, technology and wealth creation. But more than that, he has nailed the fraudsters and green activists who torment truth and science to pervert policy decisions and promote their various agendas. Sadly, the latest  coup is to have enlisted the papacy in their bent cause. Plimer puts it bluntly:

The only moral position the Pope can take is to argue that poor countries should generate coal-fired electricity.

That Francis has not done so — indeed, that he rejects such an option out of hand — perhaps helps to explain why several US polls have recorded a steep drop in his popularity. Sometimes, or so it seems, the sheep are smarter than their shepherd.

Sting, Where Are Thy Deaths?