You Won’t Get My Vote, Mr Turnbull

I wasn’t taking notes, but the conversation beside the barbeque at a recent social gathering went something like this. It is a pity 54 Liberal MPs did not hear it:

“Abbott,” said the software engineer with something akin to a shudder, “what a disaster. The man is an embarrassment.”

“And an idiot,” interjected his paramour, who in the fashion of the times prefers to be known as “partner”, rather than “wife”, even though the couple was formally married more than a decade ago. Getting the emphasis right, keeping up with the latest fashions, is important in circles where black will always be the new black and the general consensus runs to the view that taxes, wonderful things, are best paid by those too dim to engage the services of sharp accountants.

Turnbull would make a better Prime Minister, Mr Software continued to the hearty endorsement of his, er, partner.

But would you vote for him, I wondered?

Vote for a Tory? Don’t be silly! It was Labor all the way for him and the Greens for her. As to Turnbull, well they “liked” him, but only as their placeholder of preference — the Liberal who, until someone from a  better party comes along, could best express Australia’s determination to tame the scourge of global warming and load the welcome wagon with conspicuous compassion when the next batch of boat people steps ashore. Turnbull, this duo seemed to think, was almost one of them. Almost, but not quite. 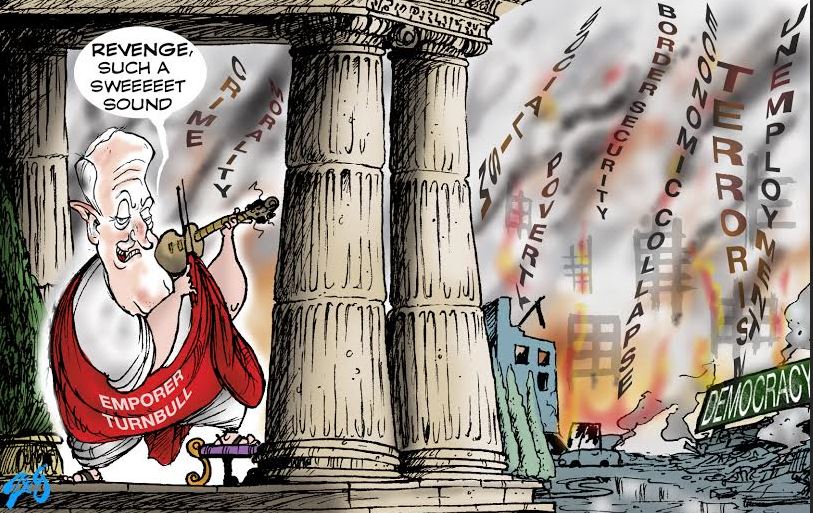 This morning, after the White Ant of Wentworth’s two years of relentless undermining, Mr and Mrs Hip-Dude have their wish and so does he. The party they despise is now led by the man they find somewhat less despicable. But actually vote for him? Well put it this way, those 54 MPs quite likely have an unpleasant surprise in store.

And me? Where do I turn now?

It was galling to see the ousted PM stutter and stumble through his curtailed reign. The passivity was infuriating. Where was the fabled pugilist who, when the voters put pay to the Rudd/Gillard/Rudd circus, was widely expected to set about the ABC? Instead, of all people, it was Turnbull he placed in charge, the self-serving sniper and sly self-promoter who indulged the national broadcaster’s blatant bias and ignored its abrogation of the chartered obligation to make at least some pro forma attempt at balance. Why would the man in the leather jacket, the tame “conservative” so beloved of Q&A’s producers, give a fig? The ABC was on his side, after all, forever massaging the dauphin of Australian politics with its kid-glove touch. For Turnbull and his party of one, keeping the national broadcaster on side was the important thing. Bugger the damage a daily stream of slurs and sneers was inflicting on his party brethren. Much better to assure Mark Scott with a quiet word and indulgent smile that he and his minions had nothing to fear from the knuckle-draggers with whom the Prince of Point Piper is obliged to share the party room. Now, incredibly, having seen their electoral chances diminished by Turnbull’s sabotage, they have rewarded him with their greatest honour. It requires a special brand of stupid to perceive wisdom in that response.

And then, returning to Abbott, there was 18C and his craven retreat from what should have been a principled campaign to restore free speech, even its odious and offensive varieties. The spectacle of a Prime Minister prostrating himself before an audience of disdainful imams was stomach-turning, his begging and pleading without dignity or success that they should enlist — no, really! — in Team Australia even moreso. They told him to get stuffed and he copped the humiliating rudeness of that rejection without complaint. In his books and during his turn as Opposition Leader, Abbott had stood for something. In office, he was seldom better than a supine shadow of his former self, a punching bag to be beaten without fear of the reciprocating blow.

Such were but two of Abbott’s fatal flaws, and they are enough to enumerate here.

But Turnbull, know that his sin is the polar opposite. Where Abbott was guilty of too much loyalty, his successor seems to have no comprehension of the word and its meaning — although he most definitely appreciates the benefits accruing to its denial.

Think of the constant mischief in the endless cascade of leaks and whispers, those confected scandals the pugilist-turned-pacifist was unable or unwilling to address head-on. From Prince Phillip’s knighthood to the lies about Abbott’s alleged shunning on an airport tarmac of a gay ambassador’s boyfriend, they were issues a competent leader would have addressed and put to bed, perhaps even turned to his advantage. A leader possessed of a workable survival instinct would long since have rooted out the Fifth Columnists, but not Abbott  Now he is gone to the back bench as Turnbull revels in the spotlight and the acclaim, at least for now, of his ink-stained cheer squad.

Did you catch his post-ascension press conference last night, the first airing of the redeemer come amongst us? It was quite a performance. He stood by the record of his friend Tony’s achievements, he insisted as blood dripped from the knife and Julie Bishop, that Theodora of the Molonglo, gazed with a courtesan’s eye at the latest sponsor of her career. But it wasn’t the serial contradictions in Turnbull’s silver-tongued assertion — Tony Abbott has been the leader of a very good government and that is why he needed to be done in — that jarred. No, it was the fluffers of the gallery to whom he turned for those few questions he was prepared to take. His questioners he flattered with little quips and first-name familiarity — tokens of endearment, one assumes, and little notes of gratitude for their assiduous promotion of the betrayals at the core of one man’s conscienceless ambition.

So back to Turnbull and my dilemma. I can’t vote for him, must refuse to reward such treachery with a ballot-box endorsement. No doubt many others feel the same, and perhaps there are even some in Parliament who still believe that honesty is at the core of conservatism, that chicanery borne of presumption and ambition is no winning quality.

If so, if members of such an endangered species still exist within the Liberals’ party room, here’s a suggestion: The door is over there. Leave, right now, and leave for good. We need a party that believes in something more substantial than the Turnbull chimera. I want a new party and I want it now.

Roger Franklin is the editor of Quadrant Online. This column reflects his personal view, not the editorial position of Quadrant. Submissions from any who wish to defend and support the new Prime Minister are welcome.

The Long-term Peril of Knifing a PM