I wanted something different; I wanted something that challenged me and that pushed me further. Then this idea of climbing Mount Everest came to my mind. It stuck in my head for days. Someone told me I couldn’t do it, and that really annoyed me.  —Raha Moharrak

The first question which you will ask and which I must try to answer is this; What is the use of climbing Mount Everest? and my answer must at once be, it is no use. There is not the slightest prospect of any gain whatsoever.
—Leigh Mallory

The recent death of Maria Strydom on Everest has led to much discussion on the hazards of high-altitude climbing, as well as the need to follow one’s dreams, whatever the cost. This is couched in the contemporary individualistic trope but (as usual) ignores the historical basis behind such activity. Leigh Mallory’s irritated answer to a journalist who asked him why he was trying to scale Everest – “Because it is there” – sums up the difference between such climbers and the current self-realization set. It is to scale the mountain that is the challenge, not to do something for the self.

Everest has become the ultimate high temple of existential consumerism, some of whose climbers pay the ultimate penalty. As a result it is littered with bodies, some of which return from their entombed past during warm spells. One skeleton seems to at emerge regular intervals but few would know it is the mortal remains of the original Everest dreamer, one who could outdo any of the current crop of self-realisation climbers. Of all those who have attempted to achieve their dreams by climbing the world’s highest mountain, none has been quite as unusual as the first true amateur, Maurice Wilson, the man who became a model for a Boy’s Own Paper character.

Wilson came from a middle-class background. His family had a wool mill in Bradford, Yorkshire. Born in 1898, he enlisted in 1916, experiencing the bloody fighting at Ypres and distinguishing himself in an attack on a machine gun post for which he was awarded the Military Cross. He was badly shot up, leaving him with constant pain, a largely immobile left arm and, as events were to show, deeply affected by his combat experiences.

Demobilised in 1919, Wilson, like so many others who had experienced the hell of the trenches, was unable to settle. He travelled to America and New Zealand – where he ran a woman’s clothing shop – and had two marriages before returning to England in 1932. Although he never had any difficulty supporting himself, his life was going nowhere and he seemed on the verge of a breakdown. It was later stated that he had pulmonary tuberculosis, a death sentence in those days. On the ship home, he was attracted to a group of Indian sadhus (sages) and discussed their religious beliefs. On his return he went through a mysterious process of prayer, fasting and special diets for 32 days. He claimed this came from a guru in the unlikely location of Mayfair who had healed not just himself but 100 other people of incurable diseases. No proof of the guru has ever been found, leading some to question whether he experienced a mystical revelation instead.

Regardless how he reached this state, in two months Wilson was cured. It would be fair to say he was in a state of elation. Such a miraculous event would lead many to proclaim the manner in which they had been saved. None however have come up with such a grand way to convince the world. Recuperating in the Black Forest, a press cutting on the 1924 Everest expedition gave him an incontestable urge to show that anything was possible with the faith he had discovered. Wilson announced that he intended to be parachuted onto Everest. When this was (predictably) rejected, he decided to fly to the mountain instead, crash-land on the slopes and simply walk the rest of the way to the peak. Two obvious problems – he had never flown a plane, nor had he ever climbed a mountain – were dismissed as minor matters that could be easily overcome.

At that stage, there had been three British attempts to scale the world’s highest peak. The last attempt in 1924 led to the deaths of Leigh Mallory and Andy Irvine who were thought to have reached the highest point to date. Wilson had got one thing right. The expeditions were organised in an old-fashioned way, over-burdened with equipment and unnecessary people. They were also motivated by the post-war imperial ethos to show how great Britain could still be.

To mountaineers, as much as the public, Wilson’s plan was not just misbegotten but mad. He had no mountaineering experience, let alone the resources of an expert team to back his assault on the world’s highest peak. He avoided tools like ice picks, wore hiking clothes and intended to overcome the high altitude and icy cold by sheer will power, meditation and fasting.

Being unable to fly did not deter him. He bought a second-hand open-cabin biplane, a Gypsy Moth (left), named it the Ever-Wrest (of 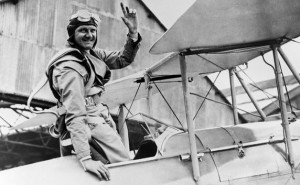 course) and took flying lessons. He took longer than most to learn the basis skills and had several accidents. His preparation for the climb consisted of walking from Bradford to London, as well as hiking around local hills.

If Wilson’s preparation was ludicrous, he eagerly sought all the information available, avidly reading reports on expeditions. This should have convinced him of the difficulties, but he ignored them. To some extent the British tendency to play down the dangers of high altitude climbing may have contributed to this. To add to the obstacles he faced, the authorities were firmly against the plan. The politics of India and Tibet were tricky, the Foreign Office vetoed his departure and the flight authorities were of similar mind, convinced his scheme was quite mad.

In one respect Wilson was thoroughly modern. From the start of his adventure, he contacted the papers who lapped up the story. Once he flew off, coverage increased. Between 1933 and 1934, The Times alone published nearly 100 articles on Wilson’s quest.  He claimed to interviewers that he was not only an experienced climber – which he wasn’t by any means – but had locked himself up in an airtight container to learn the effects of high altitude – unlikely – and would challenge Mahatma Gandhi to a fast – even less likely. Less to his liking was the newspaper report describing his project as an ‘elaborate suicide’, which in the minds of many it was.

On 21 May, 1933, seen off by friends Leonard and Enid Evans, Wilson flew into destiny. His trip to north India should have been an aviation legend. It was a testimony to his courage and determination that he got that far. On several occasions, flying in blistering heat over desert in the Middle East, he could have crashed when his fuel ran out; somehow, he managed to get to the next landing spot. In India however he realised that it was impossible to go any further by plane and, with the aid of several Sherpas managed to smuggle himself across the border into Tibet, which was hostile to foreigners at the time. Again, through sheer determination, with the aid of locals he got himself to Rongbuk monastery at the base of Everest. Now his problems really began.

Wilson refused to accept any limitations. His equipment was inadequate, he had no skills to deal with ice and even refused to use crampons left by an earlier expedition. Three loyal Sherpas gave him as much help as they could. He continued to insist that faith, fasting and special diets would give him the means to overcome the brutal conditions on the world’s highest mountain. His first attempt ended in failure and he retreated back to the monastery to spend the winter. It was evident that he had not learned anything from his failure. He still refused to change his approach or use proper equipment, let alone abandon the endeavour.

He went ahead again on 12 May , 1934, and this time got past 21,000 feet, an amazing feat for an untrained climber with minimal equipment and probably undernourished. The weather worsened and the effects of altitude were taking their toll. The Sherpas, certain that going on would lead to their death, refused to continue, begging Wilson to abandon the quest.

Wilson refused and, after further imploring him, they turned back and left him to his fate. He was never seen alive again. The following year the Shipton expedition found his body, apparently dead from exposure, at 22,703 feet. Wilson’s last diary entry (on 31 May) “Off again, gorgeous day” showed that he remained optimistic to the end. That he got as far as he did is a minor miracle, however misguided the enterprise.

At attempt was made to bury his remains in the snow but the skeleton had an unnerving capacity to reappear from its icy encasement at regular intervals (1959, 1975, 1985, 1989, and 1999), perhaps to remind climbers what Wilson had accomplished, if not stood for.

In the years that followed Wilson was not forgotten. Writers expressed grudging admiration for he had accomplished but condemned his reckless stupidity in believing he could master the task without adequate preparation or equipment. Later, there was a change in attitude and he was given more credit, added to which the point was made that some of those who succeeded were little different in their personalities. Showing that a good tabloid story always lurks behind every serious account, Audrey Wilson claimed that women’s underclothing was found in his rucksack, there was a rumour that he was wearing such garments when discovered and a woman’s shoe was found at 21,000 feet by the 1960 Chinese expedition. Add to this his working in a ladies dress shop in New Zealand, the only conclusion could be that he was the first transvestite or lingerie fetishist to attempt Everest. Perhaps another indication of what drove him are several diary references to Enid Evans, suggesting that unrequited love may have been part of his motivation.

The question is often asked: was Wilson mad? His unsettled life after the war; his blustering, grandiose manner; the utterly implausible obsession that he pursued to his death – can all occur in a manic disorder. His insistence on going on when the Sherpas turned back was nothing less than suicidal. Add to this the likelihood that his ‘cure’ was a grandiose spiritual revelation that can occur in this state. Yet the determined and dogged way he went about the whole endeavour mitigates against the disorganisation of a psychotic mind. His diary, our only record of his course once he got to Tibet, reveals nothing mad, only surprisingly mundane responses to the daily events.

So we can consider whether Wilson had a manic disorder of some sort, but we cannot prove it and, in any event – so what? Since the beginning of time men have persisted in following their dreams when everything pointed against realisation. In doing so, it cost them their lives but were they simply deluded or heroes? You must be mad to die pursuing a hopeless dream like that, some would say. What a limited and dreary place the world would be without dreamers. Maurice Wilson had something after all.

Robert M Kaplan, who has no ambition to do anything as energetic as climbing, is currently writing about Maurice Wilson, Harold Lasseter and other misguided dreamers in his new book The King who Strangled his Psychiatrist and Other Dark Tales