THE ISLAMIC STATE sent me a letter this week. This letter was in the form of a short film produced by ISIS’s Al-Hayat Media centre. This was not addressed to me personally, but to all Christians everywhere.  Its title was A Message Signed with BLOOD to the Nation of the Cross.  This was a video of the ritual slaughter of the 21 Egyptian Christians.  Their blood flowing in the ocean waves was the ‘signature’ at the end of the video.

As I write this it is Ash Wednesday.  This is the start of forty days of Lent, a period of fasting and contemplation for Christians all over the world.  For many centuries it has been a custom of Christians to receive a mark of the cross in ash upon the forehead as a sign of repentance. As I received this mark of the cross today I was thinking of the 21 Egyptian Christian martyrs.  Copts permanently bear the sign of the cross, tattooed on their wrists, as a sign that they will refuse to renounce their beliefs. 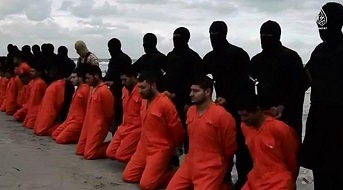 I read out these men’s names at our morning church services on Sunday, here in Melbourne. And I also choose to honour them by writing to acknowledge the truth about why they were killed, and in particular the explanation given by their killers. I also wish to record, as a Christian and a pastor, my intense protest at the White House official statement of February 15, 2015, concerning this event.  This makes no mention of the reason the 21 were killed: their Christian faith.  This culpable denial dishonours them, as it dishonours me and Christians everywhere.

The White House statement claimed that “ISIL’s barbarity knows no bounds. It is unconstrained by faith, sect or ethnicity.”  Not true.  The Islamic State’s actions are constrained by its theology, and in this case its targets are also determined on religious grounds; they were Christians.  It is not an endorsement of the killer’s Islamic beliefs to acknowledge that these jihadis follow a form of Islam, and that their sect and faith does constrain their behaviour accordingly.

President Obama has defended his administration’s misrepresentations on the grounds that the radicals are ‘desperate for legitimacy’ so ‘They try to portray themselves as religious leaders, holy warriors in defense of Islam.’ But these are not desperate people.  They are shockingly confident in their beliefs. They do not ‘try to portray themselves’ as Islamic: they sincerely believe they are. Christopher Hitchens got it right over a decade ago when he suggested of Al Qa’ida recruits that ‘they believe their own propaganda,’ and ‘absolutely subscribe to the tenets of their version … of their religion, Islam.’

Obama also stated that ‘we must never accept the premise that they put forward, because it is a lie.’  This too is nonsense.  A lie is a deliberate intention to deceive, and these self-described jihadis are – at least by their own understanding – speaking the absolute truth when they claim to speak for Islam.

Some years ago I had the privilege of reading the Gospel at a Coptic service held in St Paul’s Anglican Cathedral, here in Melbourne.  The service was held to commemorate the 22 martyrs of the attack on Al-Qiddisin Church in Alexandria on New Year’s Eve. It was led by Bishop Suriel, Melbourne’s Coptic bishop. The Al-Qiddisin martyr’s service impressed me deeply. I long pondered the fact that the Coptic church of Egypt has been grieving over the freshly dug graves of its martyred sons and daughters since the dawn of Christianity.  As I sat through the service and sung the hymns about martyrdom, I thought, ‘So this is what it means to be a Copt’.

The Islamic State video, a polished production, depicts 21 Christian men, hands bound behind them, being led one-by-one along a beach in Libya to a point where they are forced to bow down with their heads in the sand, and there they are beheaded, crying out Ya Rabbi Yasou ‘Lord Jesus!’, some reciting the Lord’s Prayer. Severed heads were then placed on top of each corpse, their Muslim slayer standing over them.  The final film shots show the Mediterranean washing red with their blood.

The whole event was meticulously choreographed and rehearsed.  The video’s obvious purpose is to humiliate and terrorise Christians, whom it derisively calls, ‘The Nation of the Cross’.  I admire the courage of the martyrs, who did not disown the name of Christ and the cross to follow Islam, even as they were being mocked and killed by their tormentors.

It is indisputable that the whole script of this video is intensely religious. It is packed with references to the Qur’an and the Hadiths of Muhammad.  As Graeme Wood comments in an important recent Atlantic Monthly article, the Islamic State adherents are constantly referencing Islam’s sacred texts. In their everyday speech, ‘Koranic quotations are ubiquitous’.  This film is no exception.  For anyone who knows anything about Islam it is impossible to view this film without being aware of the heavy constraining influence of the Qur’an and the Hadiths on the script.  These references are essential for understanding the true context, meaning and intent of the film.

The Egyptian government reacted angrily to the executions, bombing Islamic State positions inside Libya.  Egypt was incensed about this massacre – and rightly so – but it has a very long and enduring track record of not prosecuting Muslims who have massacred Christians within its own borders.  General Al-Sisi is a leader who has been complicit in this peculiar form of Muslim cowardice.  This moral inconsistency is causing great division and confusion among Copts at the present time.

My comment after the Al-Qiddisi massacre in January, 2011, remains as valid now as it was then: I deplore the lack of freedom of religion in Egypt, the authorities’ apparent unwillingness to protect the indigenous Christian minority and its places of worship, and the lamentable track record of the Egyptian justice system in securing criminal convictions against those who have targeted Christians for attack.  I call upon Egypt’s leaders to respond to these abuses honestly and with integrity, without making excuses or indulging in denial.

There is a double standard in the house of Islam.  Examples are legion.  The Jordanian royal house has been prominent in speaking up against attacks against Christians in Iraq and Syria, yet at the time when the Common Word letter was being released to the Christian world in 2008 under Jordanian royal sponsorship, its own Royal Aal Al-Bayt Institute for Islamic Thought had posted on its website fatwas by its Chief Scholar – the former Mufti of Jordan – which declared death for Christians for the crime of leaving Islam, and even identified one person by name (see here).

King Abdullah has on the one hand been a champion of the rights of displaced Christians in the Middle East, and God knows they surely need one.  On the other hand he has held up the notorious Pact of Umar as evidence of Jordan’s history of religious tolerance: “Jerusalem, which is, regrettably, subject to the worst forms of Judaisation today, stands witness to fourteen centuries of  deep, solid and fraternal relations between Muslims and Christians, enhanced by the Pact of Omar [ibn al-Khattab], and promoted by my grandfather, Sharif Hussein bin Ali, may God bless his soul.”

In contrast to this historical revisionism, the renowned Muslim jurist Ibn Kathir, accurately described the intent and effect of the conditions of the Pact of Umar as guaranteeing the continued degradation of Christians under Islamic rule: “This is why the Leader of the faithful ‘Umar bin Al-Khattab, may Allah be pleased with him, demanded his well-known conditions be met by the Christians, these conditions that ensured their continued humiliation, degradation and disgrace.” (Those who read classical Arabic may consult the Royal Jordan Aal al-Bayt Institute’s own database of commentaries here, to view Ibn Kathir’s original text.)

THE PROBLEM is that as long as Muslims allow derogatory words like mushrik ‘associator, polytheist’ and kafir ‘infidel’ to be applied to Christians, while also preaching Qur’anic verses which denigrate non-Muslims, the hostility and hatred can only continue. As long as the highest legal authorities of the Islamic mainstream continue to assert the right of Muslims to kill those who leave Islam, bursts of extreme religious hatred such as we have just seen in Libya can only continue. As long as Muslims claim that the well-documented brutal slaughters of Islamic conquest and the ensuing oppression of nations under the Islamic system of dhimmitude were a mercy to the world, the ‘opening’ up (al-futuh) of dark nations to light and truth, hatred towards non-Muslims will continue to arise in the house of Islam.

The fundamental problem is not peculiar variants of extreme religious worldview, it is a deeply engrained religious worldview that is not acknowledged by many who hold it.  Those who, like King Abdullah, allow it room to breathe by claiming that it is something other than what it really is are as much a part of the problem as the violent jihadis who are proud to own the worldview.

In the house of Islam, hatred has deep roots stretching back through time.  In 1836 Edward Lane reported in The Manners and Customs of the Modern Egyptians that it was standard practice in many Cairo schools to require Muslim school boys to invoke daily curses on the heads of Christians, Jews and other non-Muslims.  In essence these curses called for the looting, killing and enslavement of non-Muslims.  It is only against the backdrop of inter-generational hatred that a television series on the Protocols of the Elders of Zion could have become mainstream viewing in Egyptian society, and continuing kidnapping, rape and killings of Copts are perpetrated without justice for the victims.

There is an ill-wind of hatred blowing in the house of Islam and it has been blowing for a very long time indeed.  When this wind is whipped up into a tornado, the world is appalled, but it is the constant steady breeze of hatred that is the root of the problem.

As this letter was addressed to the Christians of the world, here I give my personal reply to the Islamic State, written as a Christian:

I am not intimidated by your hatred.  Our Lord Jesus Christ taught us not to fear those who may kill the body.  The people of honour on that beach in Tripoli were those 21 courageous Copts, who dared to confess the name of Christ, even with a knife to their necks. They knew well what choice they were making. You thought to humiliate them, but the Word of God tells me they are the vindicated ones, the men of glory.  I believe they knew that full well.

For you I have no hate, only pity.  You wield the sword to kill ideas and worship you do not understand, but you do this in vain. The truth cannot be killed by your knives.”

General Sisi of Egypt was right: because of you, people all over the world are doubting Islam.

(editor’s note: This is an edited, shorter version of a post at Lapidomedia: Centre for Religious Literacy in World Affairs)

Mark Durie is a theologian, human rights activist, Anglican pastor, a Shillman-Ginsburg Writing Fellow at the Middle East Forum, and Adjunct Research Fellow of the Centre for the Study of Islam and Other Faiths at Melbourne School of Theology

2 thoughts on “Hatred as an Article of Faith”

“This is about taking union money”