It is every savvy publishers’ dream to have a book at the ready just as the subject matter makes headlines, although in the case of Roger Underwood, Quadrant contributor and forester, little such acumen was required. His book, Firefighters, co-edited with Oliver Raymond, is a collection of bushfires memoirs by the men who have fought them. Summer was coming when the book went to press. Australia would burn again, sure as eggs, which is what is happening right now in Victoria. In the case of Firefighter’s editors there is no joy in being one jump ahead of the news.

The thing is, as Underwood and so many others know and despair, the fires are growing more intense. Delusional green policies advocated by academics with little practical experience in forestry have come to dominate official thinking. Empire-building bureaucrats love their big-ticket water bombers while local councils and building regulators rejoice in the excuse the bushfire threat provides to re-write codes and impose onerous and expensive construction specifications. One consequence has been the fate of poor, tormented Marysville, virtually destroyed by the Black Saturday fires which ravaged Victoria in February, 2009. Today, the town remains half re-built at best, much of the population has moved elsewhere and a charming, picturesque village is gone forever.

Hard though it is to believe, a body of opinion in the ivory tower maintains that, if only fuel levels are allowed to grow unimpeded, bushfires will self-regulate and their intensity diminish: fallen wood, leaf matter at the bottom of the pile will rot at the same rate fresh that material accumulates on top. As Orwell noted, some theories are so preposterous only an intellectual could endorse them.

As smoke clouds Victoria’s air once again and weary, hungry volunteers wonder why health-and-safety regulations now forbid their spouses from operating canteens at command centres, Quadrant Online re-produces Tony Bartlett’s memories of the Ash Wednesday fires of 1983, just one of the accounts in Firefighters.

The fuel loads are growing, the “experts” revel in their ARC grants and the bush once groomed by Aborigines’ firesticks runs riot to the acclaim of green romantics and inner-urban nitwits.  As Bartlett concludes, “…I saw with my own eyes the value of fuel reduction burning in protecting bushland settlements from intense fires. Sadly this is a message still to sink in with many of our bushfire authorities.” — Roger Franklin

In the Otways on Ash Wednesday

The most memorable of my bushfire experiences occurred on the 16th of February 1983, a day and a date I will never forget. This was ‘Ash Wednesday’ when the Forest Fire Danger Index reached 100 and bushfires ravaged South Australia and southern Victoria. At the time I was a young forester with the Forests Commission of Victoria, based at Gellibrand in the foothills of the Otway Ranges. I had studied bushfire management at Creswick Forestry School and had been to a few small fires since graduating in 1975, but nothing prepared me for the experience of that fire on that day.

It was a terrible day. The forecast was for extreme fire danger with furnace-like winds from the north and north-west. For most of the day visibility was almost non-existent, thanks to the pall of dust, haze and smoke that swept across Victoria. Everyone was on stand-by at the Gellibrand depot that day, at full readiness for when the fire call came.

It came at about 3 pm. There was a fire at Deans Marsh and fire crews were needed. I was despatched with two crews from Gellibrand, an old Bedford fire tanker and two 4-wheel drive ‘pig’ units. We arrived at Deans Marsh sometime after 3.30 pm, but by then the fire was well up into the dense forests of the Otway Ranges and on its way towards the township of Lorne. No-one knew where the fire front was, and things were desperate at Deans Marsh.  I set the crews to work on flank fires in farmland, helping to protect homesteads. At one point I distinctly recall a front of fierce flames coming out of a bush block and stretching  right across a grass paddock about 100 metres wide almost to the bush on the far side, and threatening to engulf a house. Somehow we were able to save it.

I was in charge, but I was young and relatively inexperienced. I found this sort of fire behaviour very scary, and I was very glad that I could take counsel from the older members of the Gellibrand crews.

Firefighters can be ordered from Roger Underwood for $35. Cheques should be sent to 7 Palin Street, Palmyra, Western Australia, 6157

In those days there was no Incident Control System and no real structure for managing large bushfires. Moreover, compared to today our communication system was still quite primitive. Consequently I was operating almost independently. After a while, I decided I should do some reconnaissance on the main fire, and headed up the road towards Lorne. It wasn’t long before I came across a Forests Commission overseer from Forrest, with whom I had worked in the Otways District. He was driving very fast down the road towards me, but in an erratic manner.  I soon saw why: there was a flat tyre on his Toyota tray vehicle. We both pulled up and I could tell he was very distressed. He told me that he had just seen a person burnt to death a bit further up the road and that there was no way anything could be done to control the fire up there. I helped him to change the tyre and then suggested that he go back to the office to let the District Forester know what he had seen. I decided that further reconnaissance up into the Otway forests would be futile and returned to my crews. Here we kept working around from one farm to another, putting out any spot fires that were threatening assets. One of the old timers in the crew said to me “this will be the fire that you remember till the day you retire”.

Around 6.30 pm, the District Forester got through to me on the radio, and instructed me to return to Gellibrand, get some rest and then be available to conduct an aerial reconnaissance first thing the next day. It was a nervous and unrestful night, with the wind continuing to howl through the night.  I also knew there was another bushfire in the lower part of the Otway Ranges to the south-west of Gellibrand and this posed a direct threat to the forestry headquarters and settlement.

Nothing could have prepared me for what I saw on that helicopter flight. We took off at first light and flew up over the range and down to Lorne. The forest was a smoking wreck over thousands of hectares. At Lorne, most of the town had survived, but many houses at the northern end of town had been burnt. As we flew along the Great Ocean Road towards Fairhaven and Anglesea, the situation worsened, and the ghastly extent of the damage became apparent.

By this stage the fire had pretty-well run its course, the head fire running into the ocean, and there was not much active fire anywhere on its eastern side. But I managed to make a reasonable map of the fire’s perimeter and notes on the danger spots. 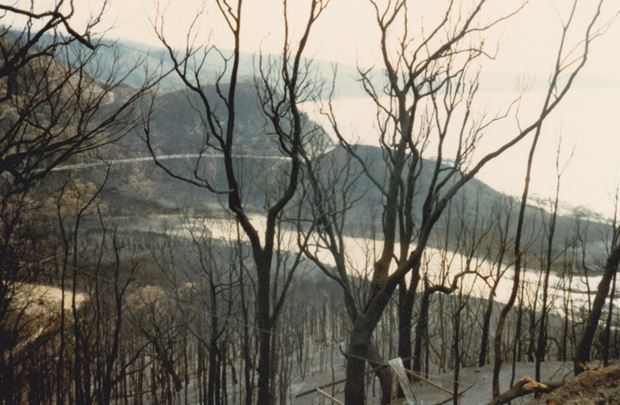 Near Lorne the day after Ash Wednesday. Photo: Barry Hayward

It was distressing in the extreme to see the many homes destroyed in the coastal towns along the Great Ocean Road. One house on a cement pylon at Fairhaven presented a stark image, everything around it was burnt and the house itself looked alright from a distance, but flying by in the helicopter we could see it was totally burnt out inside the concrete structure. We also noted a line of houses along a ridge at Fairhaven that had amazingly survived the passage of intense fire. Later I learned that they had been protected by a fuel reduction burn that had been conducted about a year before …..

….in the aftermath of the Ash Wednesday fires and some large fires in East Gippsland the same summer, the Forests Commission undertook a major review of its firefighting arrangements. I went to Melbourne to participate in those discussions and provided comment on the development of the Forests Commission’s Large Fire Organisation arrangements. These were the forerunner of the current Incident Control System.

Looking back I now realise that I learned four important lessons from the Ash Wednesday fires.

First, forestry fire crews looked to, and expected, leadership from their forest officers in dangerous situations. There was an obligation on us to be well-trained and decisive, and to have the best interests of our crews always at the forefront of our minds.

Second, on days like this there really was not much you could do to stop the onslaught of a head fire burning in heavy fuels. In this situation you needed to narrow your focus and concentrate on protecting people and assets on the flanks and at the back of the fire.

Third, improved systems were needed to manage dynamic and dangerous fires on a bad day. Forest fire control was a management challenge as much as a technical challenge.

Finally, I saw with my own eyes the value of fuel reduction burning in protecting bushland settlements from intense fires. Sadly this is a message still to sink in with many of our bushfire authorities…..

2 thoughts on “The Forever Burning Bush”