In our age of entitlement, unfunded promises, escalating debt and fiscal magic puddings, recent research on a 128-year old cold case in southern Bavaria should be mandatory reading, especially for the political class. While building castles in the air, and on terra firma, can be fun – and unlikely to result in psychiatric internment today — reflecting on the fate of ‘mad’ King Ludwig II might persuade some of us to carry on more prudently, especially with other people’s money.

Heinz Hafner and Felix Sommer’s History of Psychiatry paper last year on this royal tragedy noted how “those in power used psychiatry for their own purposes”. It caused a stir in some quarters, especially among Orwellian folk keen on pathologising behaviour such as climate scepticism. 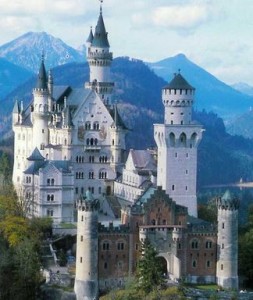 Watching Chinese tourists leave their buses in the Neuschwanstein car park to join the annual 1.5 million visitors to this Romanesque-revival fantasy castle, one’s thoughts inevitably turn to the untimely demise of its 41-year-old creator.

It happened on the night of June 13, 1886. Ludwig II (1845-86) went for a stroll with Bernhard von Gudden (1824-86), a psychiatry professor, in the grounds of Schloss Berg, 25 km southwest of Munich. Their bodies were found at about 10pm that evening, floating in shallow water 20 metres from the shore of Lake Starnberg. The king’s watch had stopped at 6.54pm — Gudden’s showed 8pm — but had he remembered to wind it?

At 4.30pm, the king had eaten an ‘enormous meal’, washed down with a glass of beer, two glasses of spiced wine, three glasses of Rhine wine and two small glasses of arrack. He left with von Gudden at 6pm. They were wearing raincoats and had umbrellas. Before departing, von Gudden sent a telegram to the State Minister-President: “So far everything is going splendidly here.”

There were no visible injuries on the king’s body, apart from minor scratches on his knees. Von Gudden, however, had a haematoma on the right temple possibly from a blow, a deep facial scratch and torn fingernail. While there were possible signs of strangling, no post-mortem was carried out on his corpse.

Two days later, however, an autopsy was performed on Luwig II by Dr Rüdiger, professor of pathology at the University of Munich, in the presence of witnesses.

“His body was 191 cm long, showed a very strong musculature and pronounced fat pads (chest circumference 103 cm, stomach circumference 120 cm). The examination also revealed a hernia inguinalis, treated by a bandage, on the right. The upper jaw was almost toothless; in the lower jaw there were four loose incisors and two cuspids, probably as a result of a chronic inflammatory periodontosis. As a consequence, Ludwig II can hardly have been able to eat any solid food in his last years, and his looks and his speech were impaired.”

The sequence of events that wet Whit Sunday night will never be known with certainty. Nevertheless, murder-suicide is now accepted as the most likely explanation of the known facts.

Historian Wilhelm Wöbking (1986) concluded the king waded into the lake to commit suicide. Von Gudden tried to prevent him. There was a struggle. The king drowned him and then drowned himself.

Yet it was raining at the time. Most of the footprint ‘evidence’ would have been underwater and presumably difficult to decipher with precision, especially at night.

It is such ‘little things’ that are ‘infinitely the most important’ at a crime scene, at least for fans of Sherlock Holmes. While there was no ‘curious incident with a dog in the night-time’, there were several curious incidents with a monarch about to be dethroned the previous week – and much barking by the State of Bavaria’s official hounds.

It would not have been a relaxed walk. For von Gudden had just released a damning psychiatric report on the king. Why, then, did he give a whispered order that no warders were to join them? Why was he so confident he could handle the situation?

Five days earlier, on June 8, he wrote that Ludwig II suffered from a ‘far advanced stage’ of ‘incurable’ mental illness, and was incapable of ruling.

“His Majesty’s mental powers have already deteriorated to such a degree that he lacks all and every insight, his thinking is in total contradiction with reality, his actions are not free, and in his delusion of absolute power, solitary as a result of his self-inflicted isolation, – he is teetering like a blind man without guidance on the verge of a precipice.”

The king, allegedly, had ‘that form of mental sickness well known to alienists by the name of paranoia (insanity).’ He was ‘incurable’ and ‘further decay of his mental faculties’ was certain.

In early 1886, von Gudden had been commissioned by the future regent, Prince Luitpold (King Ludwig II’s uncle) – on the advice of government officials — to write a medical report (Arztliches Gutachten) on the king’s mental health and capacity to govern. Three other psychiatrists, all members of the Bavarian civil service and including Gudden’s son-in-law, Dr Hubert von Grashey, co-signed the document on June 7 without alteration.

The Constitution of Bavaria provided the legal basis for establishing a caretaker reign if a monarch was inca­pable of ruling. Ludwig was subsequently removed on June 10, 1886. Three days later he was dead.

Hafner and Sommer investigated the evidence for Ludwig II’s alleged mental illness, the veracity of von Gudden’s report, and procedures and motives that led to the incapacitation and deposition. 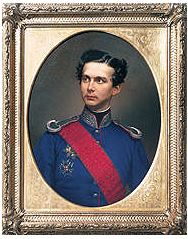 Ludwig II (right) may have been a hyper-sensitive romantic obsessed with constructing a fantasy world as a refuge from reality, but the psychiatric profession has not distinguished itself here. Diagnoses since 1866 include paranoia, ‘a mixture of madness, moral insanity and folly’, cerebral syphilis, schizophrenia, narcissism, ‘imperial madness’, neurodegen­erative disorders and so on.

For Jungians, he was probably driven by a castle-building complex that began with his childhood fascination with toy bricks. Queen Marie, his mother, noted in her journal that the six-year old ‘loved building’. She gave him a model of the Siegestor for Christmas, itself a replica of Rome’s Arch of Constantine, a structure his father had just erected in Munich.

Toss in a youthful infatuation with Richard Wagner, the man and his music, and his quest soon became a case of build or bust. And build he did during the last two decades of his life — shrines to Lohengrin, Tannhauser, Parsifal and other knights of the age of German chivalry. He also built Germany’s Versailles, the Herrenchiemsee Palace, a 16 million mark ‘holy place’ he occupied only once – for ten nights in the autumn of 1885.

After the von Gudden report became public, Ludwig II’s creations were seen as the products of a ‘disordered’ mind. For three members of the Bavarian Parliament who visited Herrenchiemsee in mid-June 1886, it explained the location’s ‘supernatural pomp and glory’. Dr Müller, von Gudden’s assistant, who accompanied him to arrest the king, described Neuschwanstein as the ‘fruit of a disordered brain’ because of its ‘enormous number of pinnacles and towers’.

Building castles costs money. Debts were about 5 million marks in 1882 and 8.25 million marks by early 1884. While they were only his – and the royal family’s – liabilities, the State was anxious because under Bavarian law creditors could sue the Royal Treasury.

Concern escalated when the king announced plans to build yet another castle, Falkenstein, starting in 1882, and a small Chinese palace. Prince Luitpold and his son Ludwig (later King Ludwig III of Bavaria), began to explore ways of preventing accumulation of more debt.

But by 1885 it had grown to 14 million marks. Ludwig’s privy purse was suspended at the end of the year, preventing him from placing new orders. Desperate, he complained he could not live without completing his castles. There were threats of suicide and emigration.

His schemes for raising money grew wilder. According to Wilfrid Blunt,

“aides-de-camp were to be sent to Stockholm to the King of Norway and Sweden, to the Sultan in Constantinople and the Shah in Tehran. In the last resort, men were to be recruited to break into the banks in Stuttgart, Frankfurt, Berlin and Paris”.

In early 1886 one of them, Graf Durckheim, wrote that he had received ‘an oral command from the king to go to England and raise ten million from the Duke of Westminster.’

As for von Gudden’s report, Häfner and Sommer found it ‘incorrect in substance and form’. He was not an independent expert. The material on which he based his conclusions was ‘inadequate and lacked objectivity’.

“There was no reliable evidence supporting the assumption that Ludwig II was mentally ill in the true sense of the word. In private the king showed behaviours that could be described as personality disorders. But these deviating behaviours cannot be interpreted with certainty as indicative of impaired cognitive functioning, espe­cially of an impairment that would have made him incapable of taking care of his own matters.”

Their investigation, however, was affected by ‘limited access to important historical records’ in the Secret Archives of the House of Wittelsbach, including ‘access to any material concerning the King’s deposition’.

But Ludwig II should have the last word. “How can you declare me insane?” he asked von Gudden on the day of his death. “You have never examined me.”

On June 10, 1886 – predated 9 June – he wrote a belated appeal. Press censorship, however, ensured it appeared only briefly in one Bavarian newspaper, the Bamberger Zeitung of June 11, 1886.

“I, Ludwig II, King of Bavaria, feel obliged to issue the following appeal to my beloved Bavarian people and the whole of the German nation: Prince Luitpold intends to seize the regency of my country against my will, and my government has deceived my beloved people by spreading untrue information on the state of my health and is plotting acts of high treason. I feel, in body and mind, like every other monarch does, and the planned treason will take place so suddenly that I have no time to take measures … against it.”

As for the royal debt, Wagner’s ghost came to the rescue. In 1884 the king’s finance minister secured a bank loan of 7.5 million marks for 16.5 years, at a fixed rate of 5%, and guaranteed by Prince Luitpold and his sons, Ludwig and Albrecht.

It took the House of Wittelsbach until 1902, almost two decades, to extinguish it.  Had Ludwig’s heirs not received a royalty stream from some of Wagner’s operas – secured by an agreement the king struck with the composer – this saga might have ended with even more tears.

Despite being ‘mad’ and extravagant, a dreamer obsessed with building regal infrastructure and Wagnerian shrines, Ludwig II cut what turned out to be a lucrative deal with ‘Wotan’.

One thought on “Building Castles in the Air”

The Discovery of Palmersaurus Rex

The Case for Seizing Liddell