Radio National’s James Carleton seems to take a particular interest in matters Middle East, or so one gathers from his tweets and re-tweets:

There’s this one, for example, gushing about the pleasure of sharing a moment with Mona Eltahawy, who turned up on Q&A in March to insist that people like Mohammad Atta and his 18 friends, who parked hijacked jets in Lower Manhattan and elsewhere, are not barbarians. Indeed, Eltahawy was charged with defacing a subway hoarding that expressed the same view. 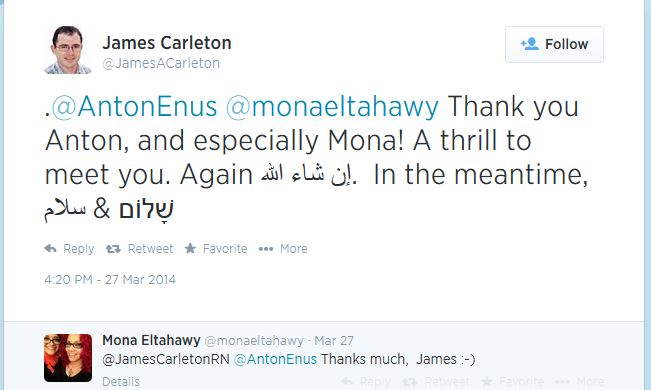 And this one, too:

This morning, August 13, Carleton was at pains to explain the factors that produced a monster like Khaled Sharouf, who posted that now-infamous picture of a child, said to be his 7-year-old son, holding the severed head of, presumably, a fellow Muslim from a faction of which Dad does not approve.. You can hear Carleton’s explanation …. mental problems, unfortunate upbringing, parental abandonment, drug use, misguided interpretation of Islam’s true message etc etc … by clicking the “listen now” button here.

Now, just by way of contrast, notice the rather different tone of his conversation with Israel’s ambassador to Australia, Shmuel ben Shmuel. The segment went to air on August 1 and can be heard by clicking the same ‘listen now’ button at thE link.

It is almost a year since Abbott & Co. were endorsed at the ballot box, chosen to lead this nation and correct the damage of the Rudd/Gillard/Rudd years. Reforming the ABC, not least with the appointment of a new “editor-in-chief”, would seem an easy enough task. Yet those who foot the national broadcaster’s $1 billion-plus budget wait … and wait … and wait

Today’s Public Burning and Those to Come

The Useful and Much Abused Tony Abbott