Although I have never worshipped the Norse gods, I felt oddly angry to read that Marvel Comics have changed Thor, the thunder god, into a female (below). It seemed to serve notice that there is to be absolutely no part of the Western Heritage to be left free of political correctness. If Thor is not allowed to remain masculine, does any beleaguered outpost of masculinity remain? 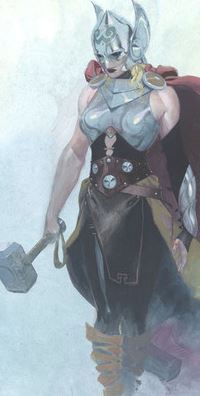 A ubiquitous enforcement of “diversity” threatens to destroy every distinctive feature of our culture and grind the lot down to a somewhat malodorous porridge. Taken to its ultimate conclusion, it threatens everything that gives colour, interest and distinction to life.

If they are not worshipped today, the gods of what J.R.R. Tolkien (a devout Catholic) called “that noble Northern spirit” have occupied a great place in our culture, and were once at the back of many songs and stories. The huge popularity of Tolkien’s The Hobbit, and The Lord of the Rings, C. S. Lewis’s Narnia stories, and countless imitations of these, shows the spirit of Norse mythology is far from completely gone.

If I could quote from my own book, Fragile Flame:

“The … images of Thor, Odin, and Loki, of Freya and Fenris-Wolf and Midgard Serpent, of the Rainbow Bridge and Baldur and the sunward-sailing cranes, of faithful Heimdal and of Valhalla and Ragnarok and the dwarfish miners underground, can still stir and fascinate. There is what looks like bawdy humor in the story of the beautiful goddess Freya consenting to have sexual intercourse with a group of presumably sweaty and mis-shapen dwarfs in order to obtain as payment the jewel necklace Brisagamen. It was a religion and mythology with a considerable concern for morality and justice, too, though like many other religions a number of its central images did not relate to the real world of fact but to a sort of poetry.

“Wonderful too, are their Sagas, telling of voyages to Iceland, Greenland and America under the leadership of dauntlessly brave men and women. One Viking women of their camp on “the long and wonderful beaches” if Furdurstrandir (Newfoundland?)  is said to have sent a group of inquisitive locals fleeing in terror by baring her breasts, slapping them with a sword and charging.”

It is true that Thor was once disguised as a woman to get back his hammer from a thief, but that was not a comparable matter.

I feel there is something wrong here. A world in which Thor is not allowed to be unquestionably masculine seems to me somehow impoverished. Will the producers of the comic even things up by making Freya a man? (Hard luck on the dwarfs, if so, unless they too change their habits.) Loki, of course, changed sex by assuming the form of a mare, but Loki was Loki, and ended up everlastingly punished. Do the producers of Marvel Comics think a female Thor is what their readers want?

At least Thor is still drawing breath — unlike poor Archie, who has been shot dead by a homphobic gun nut, as Hal G.P. Colebatch reported in an earlier dispatch from the comics rack, ‘Drawn to a Politically Correct Conclusion‘.