Drawn to a Politically Correct Conclusion

The Archie and Veronica comics were first published in America about 73 years ago. They told of the innocent, virginal lives of a group a high-school teenagers: Archie, the straight man and central character, in love with the rich brunette Veronica, and loved by the blonde Betty; the caddish Reggie, the lazy cynic and proto-beatnik Jughead; big dumb Moose and their parents and teachers.

That word “innocent” was the leitmotif. It reminded me of a very happy year I spent at Leederville Tech., repeating my Leaving after several years as a border enduring the baboonery of Christ Church Grammar School. (I will never forget the first time, at Leederville Tech., that a pretty girl addressed me by name – I got to the end of the corridor before I did a double-take and pulled up realising this glorious creature had actually been addressing me).

Anyway, it seems political correctness has finished Archie. Like The  Phantom, it tried going left-wing and politically correct but it didn’t work. (The Phantom had been on the right side many years ago at, for example, the great Siege of Malta, but I bought my last Phantom comic when it made the Rhodesians the bad guys.)

It appears the strip could not adjust to the world and now had no contact with reality. The strip introduced a homosexual, admirable and politically-correct in every way, some years ago but this has not been enough to save it. And difficulties arose in that homosexuals  have something to do with sex, which had been quite excluded from the characters’ lives previously. 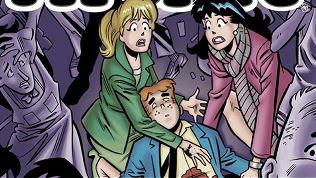 In the last issue Archie has been killed off taking a bullet fired at the homosexual by a right-wing homophobic gun-nut. On the cover of the last issue Betty and Veronica are shown bending in anguish over his blood-soaked corpse, innocence lost.

The US Voter, More Angry Than Usual