Recently, I happened to be chatting with a respected and caring inner-city general practitioner who is disgusted by the abuse of the welfare system he sees on an almost daily basis. He shared with me a recent example of bureaucratic indifference:

A 40-year-old patient came to see him, seeking the doctor’s certification that he should receive a disability pension. The medico undertook the necessary examination and found the man to be in good health.

When he so advised his patient, the response was: “Don’t worry. I’ll find a doctor who will help me.”

Some months later the GP saw his former patient, who boasted that he was now in receipt of the disability pension — one of the 832,024 recipients, whose ranks are growing by some 2500 fresh claims every week. As The Daily Telegraph reported, to the professed bafflement of Media Watch,  the number of NSW disability support pension recipients has now outstripped the total number of Australian servicemen and women injured in foreign conflicts since the 1880s.

While the number of physical injury claims under the DSP has decreased, claims relating to psychological and psychiatric conditions continue to climb at a record rate, now representing almost one-third of all claims.

The doctor told me: “I won’t report this to Centrelink. When I’ve done so in the past they have done nothing — and they also admitted that they would be doing nothing.”

”Worse, the unworthy pensioner was told of what I had done in trying to report abuse,” he added ruefully. “Honest doctors know that is not worth our while to tell Centrelink.” 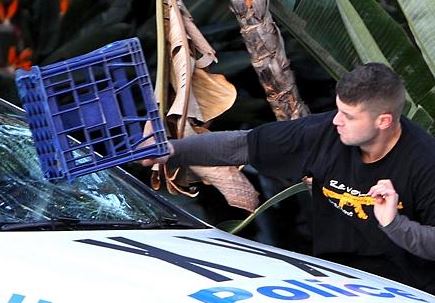 In early 2013, many were surprised to see a photograph in the Daily Telegraph (left) of homegrown Muslim rioter Omar Halaby smashing a milk crate into a police car during a September, 2012, demonstration inspired by a formerly obscure video posted on YouTube. His Legal Aid lawyer told the court that Halaby suffered from “certain disabilities” which had led him to claim the pension for the past three years.

“He has some physical problems in relation to football accidents … he has literacy issues, a short attention span, things to that effect,” the lawyer helpfully explained. That litany of woe has produced a $200-a-fortnight disability support pension. The controversial former Sydney magistrate Pat O’Shane put Halaby on a 12-month good behaviour bond.

Muslim community mouthpiece Keyser Trad, who swears it is difficult for Muslims to find employment, seems to be of the opinion that the disability pension is for the unemployed. Sadly, this is a view held by some politicians because it reduces the unemployment figures.

There is a clear incentive to move from the lower unemployment benefit  to the disability support benefit which, at a maximum of $766 a fortnight, is not only significantly higher, but also offers the added attractions of less stringent income tests and significant fringe benefits. There can be no denying that the ranks of those receiving the disability support benefit have been bloated by the unemployed, especially the older unemployed, as well as able-bodied individuals who have elected not to work.

Mission Australia chief Toby Hall warned last year, “The evidence absolutely shows, with the right support, about 350,000 to 400,000 people could go back into the workforce, which is why we think it is such an important issue.” The responsibility for remedying this resides with politicians, who have failed in their duty to ensure that the disability pension operates only as a safety net for deserving cases. They have let it grow to an impossible level through a mixture of deceit, negligence and plain vote-buying.

This is yet another reason to make politicians truly accountable. Those politicians who choose to look the other way while disability payments are abused have a duty to make sure a program intended to support the deserving is operated as conceived and intended, not as a rort-riddled scheme to defraud taxpayers.

This comment draws on  Give Us Back Our Country, by David Flint and Jai Martinkovits, 2nd edn. Connor Court, 2014

In Your March Quadrant

It’s Time to Rethink Everything … and Quickly