Bring your knitting. The Jacobins are back

There is a close link between the suppression of free-speech and the rise of state terrorism. Historically, the ALP’s desire to regulate the media and free-speech can be traced back to the origins of modern state terrorism in the French Revolution.

The Gillard government, the Greens, and especially Nicola Roxon and her supporters in the Attorney-General’s Department, the legal profession, academia, various NGOs, and the media, are modern Jacobins, and heirs to a blood-soaked tradition of totalitarian and terroristic theory accompanied by intrusive social surveillance, repression, and violence that stretches back 220 years to the institution of The Terror by the Jacobin revolutionary elite as it struggled to hang onto absolute power while French society disintegrated.

Tens of thousands of people where executed in 1792-4 once Maximilien Robespierre and the Committee of Public Safety concluded that they could not depend merely on gaining peoples’ outward conformity to their dictates, but had instead also to ensure that the people really ‘believed’ in the aims of the Revolution ‘in their hearts’. Forcing people to act in the ways required by the regime was not enough; it decided it had to control their hearts and minds as well.

Consequently, the Jacobins set up Revolutionary Tribunals designed to serve two functions: (1) to interrogate all people who came under suspicion of deviation or dissent, and punish (usually with extreme prejudice) all those found guilty of counter-revolutionary thought or non-progressive opinion; and (2) to have a didactic or exemplary effect, using an endless stream of highly publicized prosecutions and executions to terrorize everyone else into adopting the values of the Revolution. 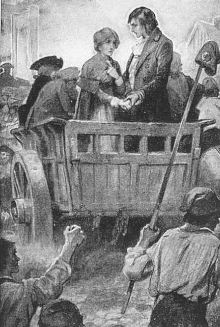 Even today, there are few more iconic images than that of the bound and beaten prisoners being driven through the screaming mob towards the dread apparatus of the guillotine, with its bloody massive blade and the basket full of severed heads. This, the system screamed out, is what happens to those who dissent.

Today a similar procession awaits those who dissent from so-called ‘progressive’ thought, only it follows a path through public ridicule and contempt, into the courts for a pre-determined finding of ‘guilty’, and onwards to punishment and financial penury.

The key innovation of the Jacobin system was that it achieved its political purpose irrespective of whether those arrested and punished were actually guilty of non-progressive or counter-revolutionary thought or not; all that was important was that the citizenry were awestruck and intimidated by the power of the state to identify and brutally punish those whom it targeted as enemies of the regime.

Reflecting this new type of regime, in 1798 the Dictionary of the French Academy approvingly introduced ‘Terrorism’ as a new concept into the French language, defining it as “a system, a regime of terror” designed to ensure conformity to the aims of the Revolution. In this fashion, state terrorism emerged because the regime was determined to not only suppress all dissent, but to remake the minds of the citizenry in its ideological image.

This, of course, meant overturning all accepted principles of justice, just as is now being proposed in Australia. As a leading authority, UCLA Professor Emeritus of Political Science David C. Rapoport has observed:

“Ordinary courts assessed the behaviour of defendants, but the Revolutionary Tribunals examined the ‘hearts’ of suspects and found it necessary to scrap the ordinary rules of evidence as impediments to accomplishing the new task. Conventional notions of guilt and innocence became irrelevant. Justice was not the issue: the problem was how to publicize a prisoner’s fate to serve as a didactic lesson by identifying appropriate and inappropriate civic character traits.”

Under the Gillard government, Australians now find themselves living in the shadow of a neo-Jacobin regime that has declared war on unauthorized opinion. As the Australian historian, Ross Fitzgerald, observes in a recent article on this dark legacy of the French Revolution, there is a “pronounced tendency among committed ideologues … to silence anyone who disagrees with them, and at present it is the so-called progressives from whom free-speech advocates have the most to fear.” Warming to his theme, Fitzgerald continues:

“Most concerning is the power of many on the left, including the so-called red Greens, who would prefer all of us to think alike or keep quiet if we don’t … That is the Jacobin road. Supposedly progressive movements have a long history of trespassing on basic freedoms [as they attempt] to refashion society”.

How has it come to this? How has it come to pass that Australia – which once held ‘the fair go’ in such high esteem – has fallen into the clutches of a ideologically driven political elite determined above all else to seize and exercise state power to ridicule, denigrate, denounce, punish, and drive from public life any manifestation of dissent or independent thought?

Ultimately, the answer lies in the rise of the intelligentsia in modern societies, beginning with the Jacobins. The New Class has its power base outside the primary areas of economic production, and instead finds its home in various government and quasi-government bureaucracies, which it seeks always to promote.

Historically, the intelligentsia once was committed to liberalism, but over the past century it has become fiercely statist in political orientation. Moreover, whereas once it promoted free-speech as a vehicle through which it develop a constituency, now it sees no need for that, as its natural power base has emerged as a coalition of special interest groups dependent upon state support and protection. It is these groups that it now caters for by promoting their interests, and especially a broad range of newly created ‘entitlements’ and ‘rights’, which require massive transfers of society’s wealth in their direction.

Obviously, it has to suppress vigorously any criticism or questioning of this arrangement. If this involves restricting free-speech and punishing those with dissenting opinions then the New Class is happy to do so, as the ALP and the Greens are presently demonstrating.

This political mutation of liberal democratic societies has developed over decades but is rapidly becoming an entrenched part of the political system. Once again the incoming Coalition government has a major task ahead of it if Australia is not to decline into a welfare state morass run by a self-perpetuating elite of self-satisfied authoritarian neo-Jacobins. As the proposed legislation to regulate the media and limit free speech demonstrate, time is running out.

Will Rudd turn a recession into a depression?

The Secular Creed of Jabs and Safeism