They were giving voise, in effect, to what John Howard said on 28 October, 2001: “We will decide who comes to this country and the circumstances in which they come.”

What the Swiss rejected — albeit narrowly, at 50.03% —  is not immigration as such. What they voted against is the freedom for any citizen from the European Union, or members of the immediate family of any citizen (whether or not he or she is a citizen) to settle in Switzerland.

To understand the enormity of this, until the referendum there was the potential, however unrealistic,  for about half-a-billion people moving into Switzerland. They certainly had the right to do so. Further, the EU is inexorably expanding towards the Bosporus. Turkey, a country of about 76 million people, is itself a candidate membership. There are four other candidate countries: Iceland, Macedonia, Montenegro and Serbia.

It is not clear at this stage how this will affect the Schengen Agreement. Under this, 26 European countries  have abolished the need to show passports at border control at their common borders. Not all EU countries belong to the Schengen Area, the notable exception being the United Kingdom.

What the Swiss have voted against is the application of a law — more accurately, Directive 2004/38/EC — of the European Parliament and of the European Council of April 29, 2004. This sets out the right of EU citizens to move about and reside freely within the territories of not member states but within the broader  European Economic Area (EEA). This includes the European Union (EU) and extends to the members of three European Free Trade Association (EFTA) members Iceland, Norway and Liechtenstein.

Switzerland, demonstrating its independence, is a member of EFTA, but has refused to join the EEA. So it is not bound by the directive but instead by a separate treaty on free movement with the EU. Under the referendum, the Swiss government as three years to negotiate a new treaty. 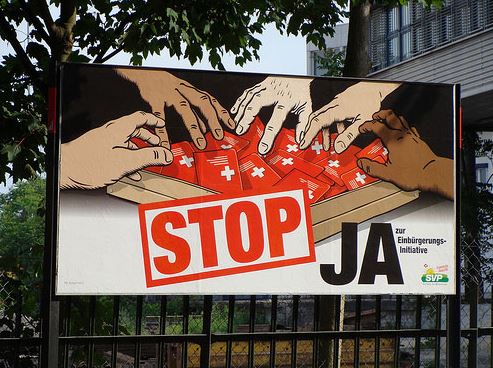 A hoarding pushes the case for restrictions on immigration

To understand the attitude of the Swiss, approximately one in four residents of the country is  an immigrant. About 80,000 people immigrate to Switzerland each year. The referendum enjoyed its strongest support in the German-speaking cantons or states with the French-speaking cantons more inclined  to retain free movement. It was  strongly opposed by the Swiss political and big business establishment, which argued that several successful industries depended on highly qualified workers.

There would seem, however, no need for them to be concerned about this, as the referendum merely requires the government to set limits on immigration, based on reasonable criteria, which would certainly include ensuring that highly qualified immigrants  still enter Switzerland.

All the referendum requires is that there be limits on immigration. The problem for Switzerland and the European Union is that EU politicians and bureaucrats have turned the free movement of people into something of a sacred cow. But if, as the initial comments indicate, the EU comes down to hard on Switzerland by denying cooperation and access in other fields, it will only encourage those within the EU who wish to wind it down or even dismantle it . There are a number of political parties and movements which have some version of this this as their principal aim, including well-known and well supported  United Kingdom Independence Party.

The Swiss referendum holds important lessons for Australia. It is clear that in recent years the political system has been captured by an alliance between inner-city elites and the powerbrokers dominating the major political parties. This has led to the adoption of policies which have little support in the broader community. For example, the abandonment of laws relating to reasonable public order, policies against the building of drought-defying dams, and the proper prevention of bushfires.

One such policy was the winding down of the Howard government’s Pacific Solution, which effectively put an end to the illegal immigration by sea into Australia andthe trade conducted by people-smugglers. As we now know, this dismantling led  to more than 50,000 illegal immigrants, many clearly attracted by our welfare state. Tragically, at least 1100 people have died in maritime disasters while trying to reach what the Indonesian President has called ”the sugar on the table”.

Had the Australian people been empowered to stop this, as the Swiss people have done, the decision of the Rudd Gillard governments to open the borders would have no doubt have been quickly reversed. In Switzerland, the people stopped immigration outsourcing by raising a petition with 100,000 signatures demanding a referendum. Under Swiss law the result of that excercise in democracy is binding. What better example is that to demonstrate that we must make the politicians accountable on every day of every week in every year?

From time to time we hear of proposed changes to the Constitution, including that last extravagant waste of money and politicians’ time, 1999’s proposal to introduce what would have been a politicians’ republic — one where the checks and balances offered by the Crown would have been removed and none substituted. Under that proposal, the president would have been a puppet of the prime minister, subject to instant dismissal without grounds, without notice and without a right of appeal.

Since Federation, the institutions of our democracy have been gradually taken over by a duopoly of political parties whose powerbrokers will more often than choose candidates on the basis of  loyalty rather than merit. The best solution would be to move towards the Swiss system and to empower the Australian people to exercise the control they ought to have over their politicians.

Prof David Flint is the author, with Jai Martinkovits, of Give Us Back Our Country, the second edition of which is being published by Connor Court for release in March 2014. Prof Flint discusses the referendum in extensive inerreview with 2GB’s Michael McLaren at http://www.2gb.com/audioplayer/32581#.UwsqaNa4aM8

Living in the Bangkok storm

The bill comes due for Rudd’s quack cure