The Battle That Saved Australia 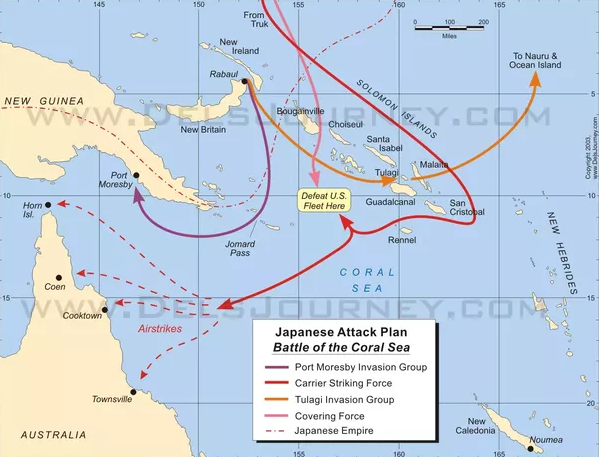 The Battle of the Coral Sea, fought in May 1942 off Australia’s east coast, was a significant engagement between units of the Imperial Japanese Navy, and those of the US Navy and the RAN. Although the battle was not decisive, its result carried significant outcomes affecting the later Battle of Midway. Further, it signalled the demise of the battleship as the most important element of naval fleets, heralding the arrival of the aircraft carrier as its replacement. It was the first battle in which the opposing ships did not sight each other, and did not come within gun range.

Following Pearl Harbor, the Japanese forces had achieved remarkable success. They had attacked down the Malayan Peninsula and seized Singapore. The Philippines had fallen and General Douglas MacArthur, the supreme general of the Allied effort, had retreated south to Melbourne. They had achieved landings and consolidation through the islands that constitute what is now Indonesia.

Emboldened by their achievements, the Japanese commanders next planned to take and hold New Guinea. This would allow them to control the eastern seaboard of Australia, and thus deny this strategically placed continent to be used as an aircraft carrier by the British and Americans. Australia, Japan believed, would be too weak to stand by itself and eventually fall to the Japanese.

An invasion from the north, around the eastern end of New Guinea, to land in Port Moresby, was planned. A Japanese task force, focused on the light carrier Shoho, was placed to stop any interception. Two heavy carriers, the Shokaku and Zuikaku, were also placed to intercede where necessary. Two Allied task forces under Rear Admiral Frank Fletcher, centred around the carriers Yorktown and Lexington, manoeuvred to engage this force and stop the landings. However, due to a combination of weather and poor scouting, both forces had difficulty locating each other. Reconnaissance at sea was notoriously difficult in those days: ships seen from enough height for the searching aircraft to stay out of gun range were often misidentified. This characterised the early phases of the engagement: for three days the Allies searched for the Japanese, achieving little except a May 3 attack on the island of Tulagi, which was under assault by their enemy.

On May 7 both sides made serious errors. The Allied task force was split, with eight ships led by the heavy cruiser Australia sent off to destroy any invasion fleet. The remainder of the force, unaware of the true size of the enemy ranged against them, sent off an aerial strike force against what was reported to be “two carriers and four cruisers.” By good fortune the aerial forces spotted Shoho and her covering force and attacked. The ship was hit by 13 bombs and seven torpedoes and sunk. Meanwhile the Japanese force had sent off a strike element against what their reconnaissance told them was “a carrier and a cruiser” but actually was a US refuelling ship and a destroyer. Both were sunk.

By now the Japanese were aware of their danger and withdrew the landing force. Their carrier group continued to hunt for the main Allied units, and sent out an aerial strike force in the late afternoon. In poor weather, the Japanese planes could not find their target, and had to jettison their weapons to make it back to the carriers. They flew straight over the top of their enemy with predictably disastrous results: only seven of the 27 aircraft made it back to their ships.

The morning of May 8 heralded the first proper carrier battle in history. Both sides’ aircraft sorties found their targets. Shokaku was hit by two bombs and her flight deck damaged while a fire broke out in the vessel’s bow. The Japanese pilots hit Lexington with two torpedoes and two bombs, setting her on fire, and Yorktown was hit by a heavy bomb. The Lexington’s fires could not be controlled and she eventually sank. The Japanese lost 42 aircraft; the Americans 33.

The result of this long and patchy fight was significant: the Japanese attack on Port Moresby had been prevented, although Japan could still claim a tactical victory: Lexington was a much more significant loss than the far less capable Shoho. They also thought that their planned invasion of Midway Island would be strengthened by the Americans’ loss.  But neither Shokaku and Zuikaku would be able to participate in this battle. The Japanese check at the Battle of the Coral Sea was to turn to disaster at Midway, and begin the end of their rising fortunes.