Sniping From The Cheap Seats

Lone Survivor is the new film by Peter Berg that lefty critics in America love to hate. The movie is a Hollywood version of Marcus Luttrel’s Lone Survivor: The Eyewitness Account of Operation Redwing and the Lost Heroes of SEAL Team 10 (2006). Luttrel, as the title of his book suggests, survived a mission that went horribly wrong. In the movie, a fictional version of his four-man Navy SEAL team has to fight off a whole lot more Taliban-aligned gunmen than in the memoir, but that’s not why the lefties are prickly about Berg’s film.

First a little background. The real-life Operation Red Wings took place during George Bush’s global war on terrorism (GWOT). An important goal of the Bush Doctrine was the establishment of a stable, inclusive and relatively democratic government in Afghanistan, a development that would impede the return of the al-Qaeda-allied Taliban to Kabul. Operation Red Wings was a US military offensive in June-July 2005 to disrupt Taliban-allied militia activities in the mountainous region near Asadabad, capital of Kunar Province. American Command wanted to safeguard regional stability in the lead up to the September, 2005, Afghani parliamentary elections. And so a four-man Navy SEAL reconnaissance and surveillance team was inserted by helicopter deep into mountainous terrain with orders to locate and identify Ahmad Shah, commander of the local anti-Coalition militia (Lutrell discusses the mission and the film in the clip below).

Operation Red Wings, for reasons that will become clear after watching Lone Survivor, made Ahmad Shah’s reputation amongst the Islamic terrorist community. The good news is that adverse circumstances precluded him from enjoying his notoriety for long. Ahmad Shah and his band of henchmen were never formally part of the Taliban, but were closely associated with the nefarious Gulbadin Hekmatyar. They shared an ambition to recapture Kabul and return Afghanistan to the dark ages, when Friday night entertainment at Kabul Stadium meant lopping off the hands and/or feet of lawbreakers and women faced public floggings, even execution, for contravening the regime’s misogynist regulations. The self-styled Islamic Emirate of Afghanistan also provided a sanctuary for Osama bin-Laden’s al-Qaeda from 1996-2001.

The combat action in Peter Berg’s film consists of one extended firefight. It begins when the location of 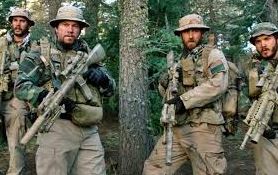 the SEALs is compromised by the unexpected appearance of three goat herders. The four American warriors are faced with an ethical quandary: kill the locals or release them and potentially pay the ultimate price for showing mercy. (Marcus Luttrel, author of the book, argues the difficulty of the choice at this link.) The final decision, compounded by the failure of their communication equipment, means that the relationship between the four-man SEAL team — as depicted at left in the movie —  and Ahmad Shah’s militia is abruptly reversed. Trapped on the upper regions of Sawtalo Sar, the hunters become the prey.

Leftist film reviewers regard the SEAL team’s dilemma about what to do with goat herders as something of a ruse. The moral crisis is not so much whether the four SEALs — Michael Murphy (Taylor Kitsch), Marcus Luttrel (Mark Wahlberg), Matthew Axelman (Ben Foster) and Danny Dietz (Emile Hirsch) — should spare the lives of the goat herders but why Americans are in Afghanistan in the first place. That is the real moral issue, according to the critics, and one that Berg’s film does not address. It is true that Luttrel’s Lone Survivor memoir explicitly argues the case for American intervention in Afghanistan in a way that the movie does not. Nevertheless, I found the turn of events in the final section of Berg’s film justification enough.

Amy Nicholson, writing for LA Weekly, hit the leftoid jackpot with her “jingoistic snuff film” jibe. Peter Berg, she concedes, is “justified in hoisting these guys up as real-life action stars” but they are also “hard-bodied, hairy-chested, rootin’-tootin’, shootin’, parchutin’, double-cap-crimpin’ frogmen” incapable of grasping the “incredibly complex” nature of the global war on terror (GWOT). The politico-philosophical worldview enunciated by Murphy, Luttrel, Axelman and Dietz, as portrayed in Lone Survivor, is simple-minded: “Brown people bad, American people good”. Luttrel, as Nicholson notes, required the assistance of British writer Patrick Robinson to complete his chronicle. Luttrel probably cannot write film reviews with Nicholson’s droll wit, and yet Lone Survivor in its final stages shows that the Luttrel character/real-life persona is more clued-up on the nuances of GWOT than Amy Nicholson.

Bill O’Reilly of Fox News fame has asserted that many of Lone Survivor’s detractors cannot acknowledge the courage of the SEALs without adding the caveat that “their heroism was performed on behalf of a racist country, a violent country, an exploitative country.” The leftist Newshounds site predictably took the bait: “And what part of that isn’t true?” she demanded, corroborating O’Reilly’s charge. It is Nicholson and the latter-day left who are more likely to see the world in black-and-white terms, only they are the last to realise this. Invert Nicholson’s representation of the Navy SEALs and you come close the mark: “Brown people good. American people bad.”

Calum Marsh, in The Atlantic, expresses a similar concern that Lone Survivor is too harsh on “the enemy”. Marsh complains that while Berg works hard to construct an “emotional connection” between the SEALs and the audience, he reduces the Taliban characters to a kind of “cartoon villainy”. We are, for example, introduced to Ahmad Shah’s militia as it “drags a man into the streets and lops his head off with a machete”. Considering how Islamic terrorists dispense justice, from the Sudan and Syria to Afghanistan, Marsh’s objection is entirely compelling. He would, presumably, prefer a film in which the same totalitarian fanatics who blew up the giant Bamiyan Buddhas in early 2001 are given the “three-dimensional” treatment.

Marsh’s concern that the depiction of combat between Navy SEALs and Ahmad Shah’s henchmen might “legitimize feelings of xenophobia American exceptionalism” conflates the heterogeneous peoples of Afghanistan with the religious fanatics who seek to enslave that long-suffering country all over again. Leftists, stupefied by their American-style identity politics, will do that.