You can bet on just about anything these days, bookmakers being ever-eager to relieve suckers of their hard-earned, and perhaps that explains why not one of the many online punting portals  opened a book on where Jonathan Holmes, the former Media Watch host, would turn up next.

That his destination was The Age, well, it was such a sure bet no sane bookie would have taken it. There needs to be an element of chance in any betting proposition, and this was a locked-down, lead-pipe cinch from the moment Holmes’ ABC colleagues bid adieu to their very own Sultan of Smirk.

Today, if only the bookies had cooperated, it would have been settling day, as Holmes has launched himself down the scree slope of a career with yet another alarm that Rupert Murdoch and his infernal legion of inky imps are once again determined to lead simple folk astray. That would be the sizeable portion of the population which shares the view of the cricket team’s worth of former cabinet members who regard our retread PM as unworthy of the office Rudd schemed, plotted and white-anted his own party for three years and two days in order to regain. 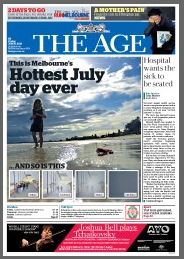 page, but the supercilious arrogance remains undiminished. This makes Holmes the perfect recruit for The Age, a newspaper with head jammed so firmly up its own fundament it can no longer see or hear the laughingstock it has become. Remember, The Age is the paper that refused to print a word about Climategate, but last month treated its remaining readers to a 60-point, front-page screamer that a late-July day had been – oh, the horror! — .1 of a degree hotter than Melbourne had ever seen before (at least since records have been kept).

Holmes and The Age are made for each other, starting with the oh-so-precious assumption that a dim electorate is a given – outside the enlightened specimens to be found at the ABC and in Fairfax newsrooms, of course. The Age has done a wonderful job of shedding readers in this despised demographic, in part, perhaps, to honour its stated principles and shrink carbon emissions. With very few copies finding buyers outside suburbs where the family car is a bicycle, Age delivery trucks no longer need to be driven very far at all from the CBD.

In those enclaves, Holmes’ epistle to the inner city that Murdoch is at it again hardly qualifies as “news”, which is generally defined as the business of telling readers what they don’t already know and believe. But even when your congregation has shrunk only to the choir, why let a good sermon go to waste? The Age’s latest star was certainly not about to do that, so it was Moloch, er, Murdoch, who inspired Parson Holmes’ first column of pulpiteering.

What set him off was the Telegraph’s front-page, ”Finally, you now have the chance to KICK THIS MOB OUT”, which must be admitted is a bit more lively than a front page reporting that the previous day’s weather was unseasonably warm. Holmes, who once cracked that tight-lipped smirk for just long enough to swallow warmism whole, finds the Telegraph’s front page unsettling. His concern is for the knuckle-dragging masses and how easily they can be induced to vote for the wrong side:

"…what’s not in doubt is that the Telegraph‘s partisanship matters. The 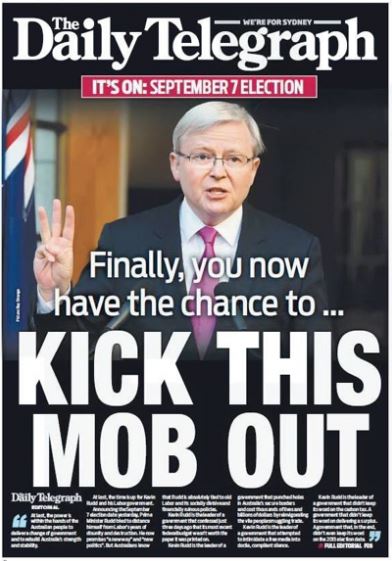 election will be won or lost, the pundits tell us, in marginal seats in Queensland and western Sydney. And, as always, the voters that make the difference are not the political tragics who watch Lateline on the ABC and read the poli-bloggers and the proliferating fact-check websites.

As that old Coalition warrior Grahame Morris put it in The Australian on Monday, these floating voters are ”often uninterested in politics … But they do still watch television. They do listen to morning radio and in many cases they do read the popular newspapers.”

The actual newspapers, not the tablet apps and the websites.

So the tabloid front pages still have an effect – especially The Daily Telegraph‘s in western Sydney. They matter in their own right, and because Sydney’s talkback radio hosts bark out the Tele‘s stories like Pavlov’s dogs…"

Set aside the most obvious element of the above extract – its condescension – and what is left? Not much, other than an author’s dour appraisal of people who found better things to do than spend 15 minutes of a Monday night watching a well-paid and government-supported talking head niggle at publications which must pay their own way and, it must be admitted, sometimes make mistakes.

What is wrong about the Telegraph’s front page? Holmes never really explains. Indeed, by the standards of openness and full disclosure he normally advocates, the big black headline could not be more frank. It states the paper’s opinion and position, eliminating the slightest possibility that the Telegraph can henceforth be accused of slipping editorial opinion into its news pages. From now until election day readers will be in no doubt where the paper stands. If the problem is editorial opinion appearing on the front page, why no blast at The Australian Financial Review, which that same day ran a front-page leader expressing the exact same sentiment?

Alas, the same candour is harder to spot at Fairfax, which today publishes a pair of stories that, between them, do a rather good job of illustrating how a media organisation that has lost its way goes about stacking the deck.

The first is a plain vanilla report of Assistant Treasurer David Bradbury’s on-air petulance when called to account for misquoting and misrepresenting Joe Hockey, an appearance that also saw him  accuse the show’s compere of being a Liberal plant. The minister just had a bad day, the very short story explains, beneath the headline “Bradbury admits he got it wrong on radio interview”, assuring readers of the front-bencher’s decency with three more paragraphs of motherhood quotes hailing the media and “its vital role in politics.”

Now compare that treatment of Bradbury with the attention accorded another politician, one who made a goose of himself on the same day. That would be the aspiring member for Greenway, Jaymes Diaz, who scores two stories – the first reporting how the whole world is laughing at his inability to recall the six elements of the Coalition’s policy on boat people. The second, considerably longer, is an analysis of the candidates Abbott might have intervened to see pre-selected – better candidates, the reporter seems to suggest, than Diaz. Along the way there are intimations of branch-stacking and a parting observation that the battleground seat may well give Abbott cause to wish he was a stronger leader, presumably if Greenway remains in Labor hands.

Two gaffes. Two very different treatments. Maybe Holmes plans to look into the matter at his next turn as a columnist.

In his initial effort, however, on the strength of no argument whatsoever that has preceded it, Holmes explains all, at least to the satisfaction of Fairfax readers, why the Telegraph was wrong to have done what it did. It boils down to this: Murdoch is an old fogey who doesn’t like the left, or as Holmes puts it, a “grumpy old American Republican billionaire, funding right-wing think tanks and bleating about evil labour unions.”

And finally, just for mischievous good measure, Holmes recalls how journalists at The Australian went on strike in 1975 to protest the paper’s editorial treatment of the Great Gough.

Gee whiz, it’s almost as if he wants News Corp hacks to down keyboards and head to the picket lines all over again. If so, being the fair and unbiased arbiter of good journalism that he is, surely Holmes also should have mentioned that the electorate rejected Whitlam by a huge majority, regardless of the sympathy he received from reporters and sub-editors. But that landslide was probably Murdoch’s fault, nothing at all to do with Iraqi loans, ASIO raids, Al Grassby’s favours for Mafia mates, Jim Cairns, Juni Morosi, ministers misleading Parliament and all the rest.

Labor governments are never incompetent, dishonest, given to abrupt policy reversals, internally divided or characterised by deceit and manipulation intended to turn one section of the public against another. That, one gathers, is Holmes’ view.

And if they are, how dare that wretch Murdoch say as much, especially on the front page of a paper he happens to own!

Roger Franklin is the editor of Quadrant Online. Full disclosure: He was once done over by Media Watch, complete with a late-Friday afternoon “please explain”. The segment transcript can be read here.