NOT so long ago, Julia Gillard found an extra $10 million to pay for an ABC fact-checking unit. Cynics wondered if our Prime Minister might be slinging a little cash – a lot of cash, actually, because at least $100 million in additional funding followed soon after — to the national broadcaster in order to bolster institutional loyalty as the election draws near.

Nonsense, ABC types retorted. The ad for the position (below) made it very clear that journalistic integrity and a straight-bat approach to winnowing fact from spin would be all that counted. “The editor will lead and manage the unit, to deliver engaging content that builds a reputation for accuracy, impartiality and clarity,” the ad said. 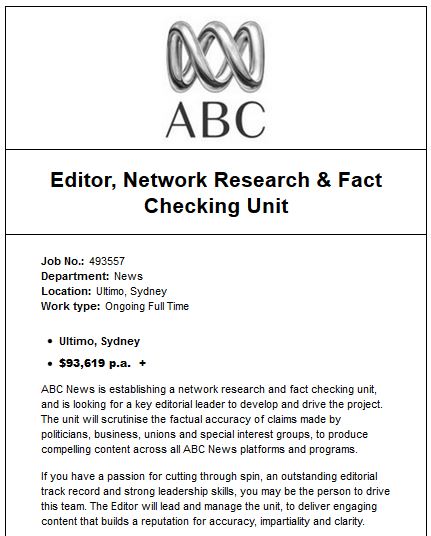 Today brings word that Mark Scott’s minions have made their choice: veteran Age journalist and Virginia Trioli’s hubby Russell Skelton, who will soon be deciding if other reporters and politicians match his own, now ABC-endorsed standards of “impartiality”.

No doubt Skelton will do his best, but some of his own reporting and commentary makes one wonder if he can overcome what appears to be a rather passionate distaste for conservatives, including Quadrant. Here he is hailing the wonderful achievement that was Kevin Rudd’s 2020 Summit:

The 2020 Summit has been just such an exercise. For one weekend a national conversation took place about the future of the country without a bunch of once-influential marsupials shouting down discussion of significant policy issues.

These are the possums of the conservative commentariat. They are an invasive, boisterous species. They make their nests within the pages of Quadrant magazine (an obscure journal with a circulation that is a fraction of the Kmart catalogue), and invade the columns of News Limited papers and the hollowed-out walls of right-wing think tanks.

Skelton concluded by noting, “For the first time in a generation (yes, I include the Keating years) a conversation was held without a prime minister and coterie of pompous finger-pointers telling us that they, and only they, knew what is best for this country. Possum dogma has finally been dislodged.”

Asylum seekers could be another area where Skelton’s “impartiality” will be tested:

Almost 20 years have passed since Gerry Hand, a left-wing minister in the Hawke government, introduced mandatory detention. It is hard to think of a more toxic, socially damaging and costly public policy.

As for Skelton’s ability to determine if news reports concerning climate change are fair and accurate, the warmist Skelton will need to be subdued by  ABC-impartial Skelton:

Get that ? All sane scientists say the planet is about to boil, and don’t you dare doubt it, not for a moment. After all, the "impartial" new chief of the "impartial" ABC’s "impartial" fact-checking unit has proclaimed it so

Roger Franklin is the editor of Quadrant Online. He would consider  working for the ABC, but only in the capacity that the Red Army worked to remodel Berlin

Please, Santa, an Axe for Christmas

The Left’s Motto: I Feel, Therefore I am Right