With Wilders on the road to woe

Beside the Hume Highway heading north from Melbourne and just before you pass the Ford plant, a striking billboard towers above the traffic. It pictures a bearded chap in a Muslim prayer cap, arms wide and palms open in a Messiah-style invitation to attend an upcoming “peace conference and exhibition” at which a certain Dr Waseem Razvi will be the chief speaker.

“All faiths welcome”, the sign proclaims, a seeming endorsement of that ecumenical amity and frictionless multiculturalism of which we hear much but see a good deal less. 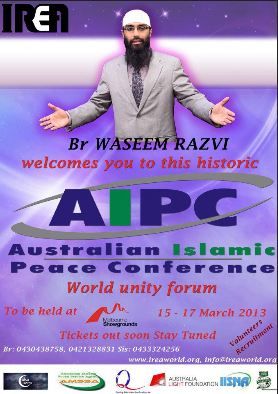 Really, you had to laugh. Just up the road, where Geert Wilders was to speak and two speeding Highway Patrol cars were heading, tiles were popping off multiculturalism’s gorgeous mosaic right and left.

The cops weren’t the only ones making tracks to the Mirage reception centre, where Wilders’ appearance had been moved that day under a cloak of secrecy. He was to have spoken at a CBD venue, but that plan had to be scrapped for fear of violence. As the owners of the 30 halls and auditoriums across Australia who have banished the touring Dutch parliamentarian came quickly to realise, free speech isn’t a paying proposition if you have to repair the damage of a rampaging mob. Hence the Mirage, handily shielded from trespassers by a high fence and a single gate, where the police were able to establish their cordon sanitaire.

Alerted by Twitter, including the message below from Media Entertainment & Arts Alliance organiser Jake Wishart,  the protesters also were en route in a straggling procession of cars plastered with stickers for all sorts of chic causes.

One battered Toyota’s rear panels read like a mobile version of any day’s Fairfax opinion page, albeit with better spelling and more competent punctuation, damning Japanese whalers on the boot lid and the damming of “wild” rivers on its bumper.  Two other vehicles in what amounted to a convoy, one guesses from the inner city, were similarly adorned. If any of those drivers noticed Dr Razvi’s beaming presence as they passed beneath, none slowed to acknowledge it. Up ahead, as one of the megaphone wielders would later shout to the mob, were “middle-class mums and dads who needed a lesson.”

And that was just what some received as they braved the gantlet of protesters to enter the premises.
A silver-haired lady had the tickets snatched from her hand. Several other arriving members of the public were pushed and jostled, and one man in early middle age was flung to the ground by a bull-necked thug with the squared shoulders and legs-apart stance of a prizefighter. Tolerance, it seems, is now a two-fisted thing. But that was early in the piece, before the police were fully deployed and demonstrators, isolated behind a wall of unsmiling blue, were reduced to chanting obscenities and hocking the odd lump of phlegm. For good measure, arrayed seven abreast at the gate, a formidable cavalry corps sealed the Mirage like a cork.

It had been quite a day for Wilders, whose first public appearance was an 11.30 am press conference. As with the evening’s public address, its secret location was revealed to reporters by email just hours before he took his seat at the microphone. Once again, caution’s logic was compelling. As one of the conditions for putting questions to Wilders, reporters were prohibited from naming the venue, lest it become the target for protesters’ future retribution. Thinly attended, the session’s first questions came from a reporter whom Wilders welcomed with unconcealed sarcasm as “one of my friends from the ABC”. After 7.30’s hatchet job of the night before, his expectation of straight-bat coverage by the national broadcaster would not have been high. Although he has been in Australia for only a few days, he has proven to be a quick student.

The reporter, a round-faced little fellow with a voice that emerged in a laboured and constipated whine, was keen to play Stump the Bigot, smugly demanding to be told how Wilders, who advocates banning migration from Islamic countries, could ever hope to identify those nations.

The Dutchman swatted him, noting that the UN maintains a register of  Islamic governments and that they constitute an officially recognised voting block. Just for good measure, he added that any nation where Sharia law prevails would be an obvious candidate. His interrogator was swallowed by silence for the next few minutes.

There were other questions to be fielded.

Did he hate Muslims? No, but he opposed the totalitarian ideology that was the religion’s political face.

Was he “right wing”? Not at all, which should have come as no surprise to anyone aware that one of his Wilders’ chief complaints about Muslim youths is the enthusiasm of some for beating the daylights out of homosexuals. 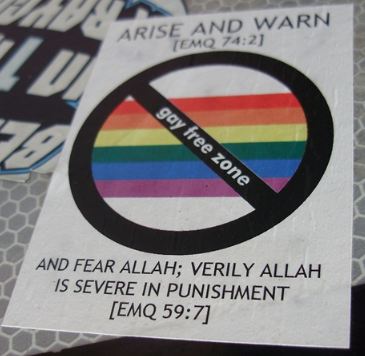 Being an opponent of poofter-bashing is, it seems, a virtue only when espoused by those who have assimilated the full complement of views that go so down well over fair-trade coffees in ABC cafeterias, diversity for the sake of diversity being very high on that list and a blind eye not far behind. While Wilder’s command of English is excellent, one can only assume he has yet to come across the term “cognitive dissonance.” He will appreciate when he does.

As Wilders probably knew , he might just as well have saved his breath. That night on the ABC, he was once again cast as “right wing”, with The Age’s  Carolyn Webb going one better and upping the ante to “far right”.

Then there was the question of the Koran and whether or not it should be banned? According to Andrew Bolt, who dined with Wilders the day before, he doesn’t want it banned. But at the press conference the answer seemed to be otherwise. Mein Kampf (“a disgusting, obscene book”) had been proscribed at the urging of the Dutch left, which celebrated its victory with “dancing and cheering.” If Hitler’s manifesto is beyond the pale, Wilders wondered, why not the Koran for its admonitions to bring down the wrath of Allah on wicked Jews and other infidels?

Then there was the matter of Mohammad, “a terrorist, a warlord and a pedophile”. Well you could almost hear the gasps! While the Koran makes no bones about the Prophet putting his enemies to the sword, imposing taxes and curtailed liberties on non-believers, or that he married a six-year-old and de-flowered her at nine, modern etiquette demands that such matters be overlooked. Tony Abbott, whose mere Catholicism has been a lightning rod for the left, should be so lucky to get such a pass from the likes of the Socialist Alliance types, CFMEU members, assorted Trots, Occupiers and veterans of the G20 riots howling at the Mirage’s front gate.

Inside the auditorium, after passing through a metal detector and bag-search, Quadrant Online’s Tony Thomas was one of the 500-or-so audience members to be addressed first by opening speaker Sam Solomon, a convert to Christianity who spent 15 years studying the Koran and spoke at length of Islamic intolerance for non-believers. Thomas’ notes record:

Wilders got a standing ovation, both arriving and when he finished. The Q Society’s Debbie Robinson thanked Victoria Police for assisting audience access to the venue, and for making it possible for Wilders to speak without fear of violence or interruption. “It has been a major job getting it organised — it is not like a Wiggles concert,” she said. “We thank supporters and members and families for putting up with a lot. You must stop being afraid.”

The Q Society had no problem raising funds from the audience. After Wilders left, the stalls selling Q’s charter and publications and Wilders’ books, were densely packed, with many buyers saying “keep the change” from their $50s.

(The full text of Wilders’ address can be found here.)

By the end of Wilders’ address the crowd at the gates, having chanted itself hoarse, had bundled up the unsold copies of Green Left Weekly and departed, allowing audience members an untroubled exit. Perhaps some protesters made it home in time to catch ABC late bulletins pinning the “far right” tag on Wilders while tactfully neglecting to mention the protesters’ affiliations with the ratbag left.

As for the audience, there must have been some interesting conversations after the show – re-cappings of Wilders’ point, which he never fails to make, about Islam’s insularity, its distance, as he sees it,  from the host societies with which it refuses to integrate. London buses and trains are blown up by a brigade of jihadis whose homegrown radicalism reversed the integration their parents cheerfully embraced and by which standards their children were raised. Closer to home, we have heard via the courts of some or other firebrand cleric’s followers laying plans to blow up the MCG, turn Lucas Heights into a nuclear inferno or attack the Holsworthy army base in the name of Islamic grievance. That interest in explosions may be entirely co-incidental, but by Wilders’ reckoning it is the creed itself which encourages acolytes to wrap their dark intentions in the trappings of spiritual enlightenment.

Ah-ha, you might say, but what of Dr Waseem Ravzi of the Hume Highway billboard? Isn’t he extending the hand of friendship to other faiths? Might he not be the very model of the Muslim moderates so often cited and extolled after the latest attacks and outrages?

Well yes,if his overture to other faiths is any indication, he is a moderate – and that may be the key. As the clip below demonstrates, despite those invitations to other faiths his version of Muslim life remains a recitation of oppression and humiliations. It is only a question of time, and he is quite blunt about this, until the violence and injustice being visited on the brothers and sisters of Gaza and the West Bank, in Syria, Afghanistan and in Iraq, also manifests itself in Australia. There is no element of “might” in his prediction; it is purely a matter of “when”.

It is an impressive piece of work, that billboard above the Hume, but look beyond the open-door pieties of its signwriter’s lettering and what remains looks very much like a paranoid and perpetual victimhood, a prophesy of worse times to come and, most of all, an instruction from the pulpit that the full and total embrace of fundamental Islam is the ummah’s only refuge and salvation. Wilders would call that a society apart, the nation within a nation.

Neither man would enjoy the observation, but it is one point on which Wilders and Dr Razvi evidently find themselves in uncomfortable agreement.

Roger Franklin is the editor of Quadrant Online. Frequent contributor Tony Thomas never lets a posse of ratbags stand between him and a speech worth hearing