Inherit the Wind (and not much else)

One Senate inquiry is addressing Australia’s drift towards a fuel crisis, a sin of omission on the part of the Rudd/Gillard government and the current Liberal one.  Another Senate inquiry is investigating a sin of commission that started under John Howard’s watch and continues to this day, namely the proliferation of wind turbines under the RET Scheme.

Submissions to the latter inquiry are online here.  I commend submission Number Five by your humble correspondent. It is reproduced below:

Submission to the Senate Inquiry into Wind Turbines

NO ELECTRIC power producer would take power from a wind turbine operation if they had the choice.  All the wind turbines in Australia have been forced upon the power companies that take their output.

So the question has to be asked, why do we have wind turbines in the first place?

Wind turbines are commonly considered to produce renewable energy.  This is distinct from energy sources that are once-through and thus finite. The rationale for renewable energy is that its use reduces the consumption of fossil fuels by substitution.  The rationale for that, in turn, is that fossil fuels contribute to the warming of the atmosphere through the greenhouse effect.  This last rationale goes to the source of the wind turbine problem.  So it is apposite to examine that claim.

The greenhouse gasses keep the planet 30°C warmer than it would otherwise be if they weren’t in the atmosphere.  So the average temperature of the planet’s surface is 15°C instead of -15°C. Of that effect, 80% is provided by water vapour, 10% by carbon dioxide and methane, ozone and so on make up the remaining 10%.  So the warming provided by carbon dioxide is three degrees.

But the relationship isn’t arithmetic, it is logarithmic. The  University of Chicago has an online program called Modtran which allows you to put in an assumed atmospheric  carbon dioxide  content and it will  tell you how  much  atmospheric  heating that produces. It turns out that the first 20 parts per million produces half of the heating effect to date. The effect rapidly drops away as the carbon dioxide concentration increases. 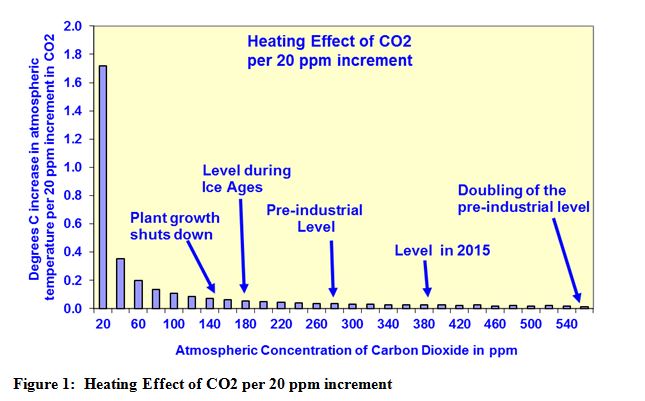 Further to all that, belief in global warming from carbon dioxide requires a number of underlying assumptions.  One of these is that the feedback loop of increased heating from carbon dioxide causes more water vapour to be held in the atmosphere which in turns causes more heating, a runaway effect.  And that this feedback effect only starts from the pre-industrial level of carbon dioxide in the atmosphere – not a higher level or a lower level, but exactly at the pre-industrial level.

Figure 2 illustrates some of the mental gymnastics and self-delusion required to believe in global warming.  It shows the cumulative increase in temperature for a given carbon dioxide concentration: 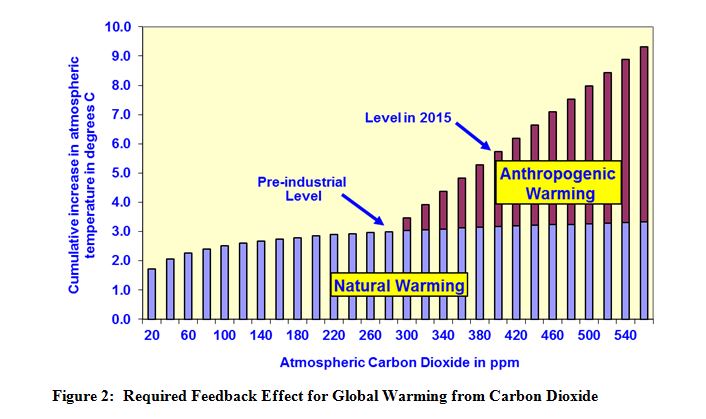 Some estimates of the heating effect of atmospheric carbon dioxide are as high as 6.0°C for a doubling of the concentration from the pre-industrial level.  For this to be true, atmospheric heating of at least 2.0°C should have been seen to date. In the real world, there has been a temperature rise of 0.3°C in the last 35 years, as measured by satellites.  This is well short of what is predicted by global warming theory as practiced by the CSIRO, Bureau of Meteorology and others.

This is also a far more plausible reason for the warming of the planet during the current Modern Warm Period which followed the ending of the Little Ice Age in 1900.  The energy that keeps the Earth from looking like Pluto comes from the Sun and the level and make-up of that energy does change. The Sun was more active in the second half of the 20th century than it had been in the previous 8,000 years.  As shown by the geomagnetic Aa Index, the Sun started getting more active in the mid-19th century and the world’s glaciers began retreating at about the same time.

It is entirely rational to think that a more active Sun would result in a warmer Earth, and this is borne out by empirical observation. To wit, the increased Antarctic sea ice cover observed during the satellite period.  This is shown in Figure 3 following of 12 month running average sea ice extension from 1979 to December 2014: 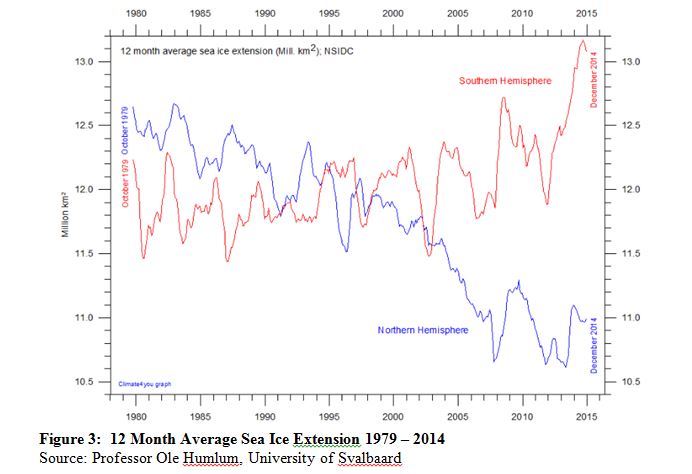 The increase in Antarctic sea ice extent is entirely consistent with increased global temperatures due to high solar activity, as explained by Henrik Svensmark’s theory, which holds that high solar activity produces a lower neutron flux in the lower troposphere from intergalactic cosmic radiation, in turn providing fewer nucleation sites for cloud droplet formation and, thus, less cloud cover. Sunnier skies over Antarctica in turn mean that more solar radiation is reflected by high-albedo snow and ice instead of being absorbed in the cloud cover.  Thus Antarctica has cooled.

The rest of the world has enjoyed the best climatic conditions, and thus agricultural growing conditions, since the 13th century.  But what the Sun gives it can also take away.  Solar physicists have been warning for over a decade  that the Sun is entering a prolonged period of low activity similar to that of the Maunder Minimum from 1645 to 1710. Most recently, Livingstone and Penn have predicted a maximum amplitude for the next solar cycle, Solar Cycle 25, of 7.  By comparison, the previous solar cycle, Solar Cycle 23, had a maximum amplitude of 120. 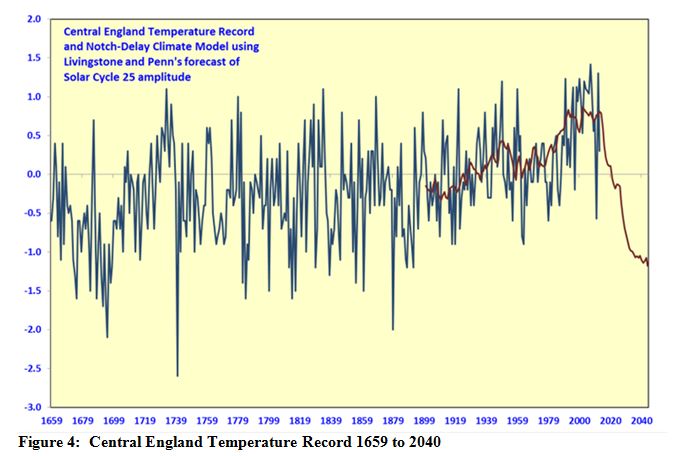 As shown in Figure 4, the reduction in solar activity now being observed will result in temperatures returning to the levels of the mid-19th century at best, with the possibility of revisiting the lows of the 17th and 18th centuries.  Peak summer temperatures may not change much but the length of the growing season will shorten at both ends, playing havoc with crop yields.

The notion of global warming has resulted in an enormous mis-allocation of resources in some Western societies, but we can be thankful for one thing.  If it had not been for the outrageous prostitution of science in the global warming cause, then the field of climate would not have attracted the attention that has determined what is actually happening to the Earth’s climate.  Humanity would otherwise be sleepwalking into the severe cold period in train.

As demonstrated above, there is no moral basis for Australian society’s investment in wind turbines if the purpose of that investment is to reduce carbon dioxide emissions through a form of renewable energy.  Global warming due to carbon dioxide is of no consequence and the world is cooling anyway.

WIND TURBINES may lack a moral purpose, but might there be some other good involved?  Let’s examine the claim that wind turbines provide renewable energy, thus reducing our depletion of finite energy resources.

Wind turbines are made using energy from coal at about 4 cents per kWh and provide energy thought to cost of the order of 10 cents per kWh.  In effect, they are machines for taking cheap, stable and reliable energy from coal and giving it back in the form of an intermittent and unpredictable dribble at more than twice the price.

There is not much more that needs to be said. The RET Scheme is a monstrous misallocation of the nation’s resources and continues to make the Australian people poorer for no good reason.  Those who concocted it and voted for it have sold the Australian people into the servitude and oppression of rent-seekers to the tune of $5 billion per annum. The science and economics it is based on are no better than voodoo and witchcraft.  The wind turbines scattered around the Australian countryside are a physical manifestation of the infestation of the body politic by the self-loathing, millenarian cult of global warming.

Unfortunately, the RET Scheme and its ilk have drawn resources from the development of energy sources that would power Australia cheaply, efficiently and with enough of a return on energy invested to maintain Australia’s high standard of living into the next millennium.

The same kind of intense interest from the wider scientific community that determined what is really happening with climate has also determined that the optimum nuclear technology for society to adopt is the thorium molten salt reactor.  Any middle-ranking industrial power, such as Australia, could develop this technology, and should do so.

Much time and treasure has been lost chasing the phantom menace of global warming.  The sooner the RET Scheme is put to rest, the sooner that the nation’s efforts can be properly directed towards our security and welfare in developing the best possible energy source if the nation is to survive and prosper.

David Archibald is a visiting fellow at the Institute of World Politics in Washington DC where his research interest is strategic energy policy.  The Institute is a graduate school for US security agencies, State Department and Department of Defense. He has published several books and a number of papers on climate science.  He has lectured on climate science in both US Senate and Congressional hearing rooms. His most recent book is Twilight of Abundance (Regnery, 2014)

2 thoughts on “Inherit the Wind (and not much else)”