Tennis as it was

The double episode of the ABC’s Australian Story on Rod Laver, recently re-broadcast, led me to re-watch (for the umpteenth time) my DVD of the 1969 Wimbledon tennis men’s singles final. This was the classic match in which Rod ‘Rocket’ Laver defeated John ‘Newk’ Newcombe, thus securing for the Rocket the third rung of his second Grand Slam.

The match is an absorbing study in tennis tactics and the flow and counter-flow of a game between two wonderful players. It also provides a fascinating counterpoint to the modern game, today’s top players and the contemporary presentation of tennis.

Laver won the first set 6-4. Both men played classical, serve-and-volley grass court tennis and there was just the one break of serve. But in the second set, there came a moment when it palpably dawned on Newcombe that the match was taking a predictable course. He suddenly changed his tactics. Instead of trying to hammer passing shots, he began to play soft little dinks and slow, low sliced returns of serve, giving Laver nothing to work with. He took Laver away from the net repeatedly with cunning lobs. He stayed back just at a time when the whole world expected him to charge the net. Laver lost his momentum. Newk took the second set and roared into the third, reaching 4-1 with a break, his serve to come, and all the energy on his side of the net.

It was the most critical moment in the Championships, and Laver knew it. At that moment, as he was so uniquely able, the Rocket lifted. He began to read Newk’s game, scampering back to retrieve a lob or put away an overhead, dinking back the dinks with deceptive angles, and hitting searing passing shots when Newk was pulled to the net. Coming from no-where, he won the next six games in a row, and took the third set 6-4. He then broke immediately in the first game of the fourth set, and basically coasted from that point, to take the set 6-4, and with it, the Wimbledon Championship.

Newcombe was magnificent, brave and skilful to the end, but midway through the final set you could sense that he knew he had failed to take the champ when he had him down, and that this preyed on his mind for the rest of the match.

Years later I heard Newcombe remark on television: “When you played Rod Laver in a best of 5-set match, you never knew when you were in deeper trouble – when you were two sets to love down or two sets to love up!” I have always loved this observation on Laver’s magnificent sporting personality – he could win as easily from behind as from in front, and was equally dangerous in both situations. He also had the ability to win when he was playing badly (“winning ugly” as the pros call it). Calling on all his resources of determination and sheer cussedness, he could find a way to win, even on a day when his shot-making was marginally off. Winning ugly is a characteristic of all great sporting champions, including successful football and cricket teams. 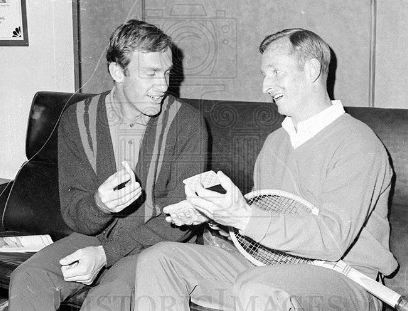 There were several other things I loved about the match and its presentation by the BBC. For example, play was almost continuous. There were no delays for towelling down between points, something that seems to be obligatory for modern players. There was no lingering choice of balls or fifteen or twenty bounces before serving…they just took the balls thrown to them by the nearest ballboy and got on with it. At the change of ends, no chairs were provided for the players to sit on under a sunshade held by a pretty young woman, as is common when a match is played in sunshine these days. The players simply stood by the umpire’s chair, took a drink of water, and moved out onto the court.

And best of all, the telecast contained no repetitive, dumb and infuriating commercials. Just tennis, briskly played.

Furthermore, while both players displayed fierce concentration and maintained their physical and mental intensity to the very end, there were no theatrics. After a great shot or a break of serve, the players would simply turn and walk to the spot for the next point without punching the air, clenching the fist, screaming with jubilation (“Come Onnnn!”) or carrying on like a pork chop. You could see them thinking, but not about the shot they had just played, rather about the point ahead.

There was no grunting, screeching, swearing, glaring at the linesmen or racquet throwing. Nor do I remember one single challenge of a line call, or any form of gamesmanship aimed at upsetting the opponent.

Tennis apparel was neat and professional: white shirts, white shorts, white socks, white shoes and white balls. The bowler-hatted linesmen looked like (and probably were) retired Indian Army colonels. Nor did the camera constantly dwell on “celebrities” in the crowd.

I liked the old-fashioned television presentation very much. The commentators said little, and nothing obvious. Observations were mostly made at the change of ends. When Laver hit a magnificent backhand, they did not exclaim “Laver hit a magnificent backhand!” When Newcombe held a break point, the commentator did not point out that if he won the next point he would win the game. The expert comments were provided by Jack Kramer, with a guest spot to Lew Hoad, and both were quietly perceptive, immensely credible, and very unobtrusive.

I was lucky to have seen Rod Laver playing at his top, both in person and on television. In 1969, the year he won his second Grand Slam, as well as beating Newcombe at Wimbledon, he had to defeat Tony Roche in both the Australian and US Opens, and Ken Rosewall in the French Open. Laver, Rosewall, Newcombe and Roche were the equivalent at that time of Federer, Nadal, Djokovic and Murray today. They were all magnificent players, and although some might say that Rosewall (in his mid-30s) was perhaps slightly past it at that stage, those who said this would overlook the fact that he later won another Australian Open and US Open title. Tony Roche, remembered more as a doubles player today, was in fact the heir-apparent to Laver in Australian tennis, more so than Newcombe. Tragically, Roche suffered an elbow injury and never fulfilled his promise as a top singles player.

I also reflect on the similarities between Laver and the wonderful Roger Federer, my favourite modern-day player. Not in physical appearance, of course, but in tennis skills and smarts and court demeanour – although Federer is more animated; Laver tended to play an entire match with one blank facial expression, suggestive of stony concentration, his body language exuding a calm professionalism).

Also like Federer, Laver always seemed to play just well-enough to win … until threatened. Then he was able to simply ‘change gear’ and take his game to a higher plane. In this respect he reminded me of the champion Formula One racing car driver Ayrton Senna, whose goal, he once remarked, was to “drive as slowly as possible … but still win”.

Laver had wonderful variety in his game. For example, when you think of his tennis you tend to remember the rolled topspin backhand, and the whippy, slashing forehand, but he hit lovely sliced shots – especially the sliced backhand return of serve – and he was a master of the soft, angled volley. He played both the offensive and defensive lob with beautiful deception.

Federer and Laver (and Rosewall, Roche and Newcombe for that matter), exemplify ‘the all-court player’ whose style has always been so attractive and so effective, although Laver spent far more time at the net than does Federer (his greatest weakness in my view). And also like Federer, Laver never appeared to be in a hurry; in fact he seemed to play almost at a walk, punctuated by the occasional scamper. Partly this was attributable to his being well inside the baseline, and firmly in control of most points of a match, but it was also because of his acute anticipation, which seemed to allow him to cruise to the right spot almost before his opponent played the shot.

Federer has a more powerful serve than Laver, but I’m not sure it is more effective, considering that Laver was a lefty; nor is it easy to compare the serve of a man using a 1960s wooden racquet with one using the super-technology carbon-fibre racquets of today. Laver’s serve was very deceptive, especially to the left court, and watching him serve from the vantage point of a television with play-back facility, I still could not pick which way his serve was going to go – way wide to Newcombe’s backhand, or ripping down the centre. Nor could Newcombe pick it, and he must have played hundreds of points against the Laver serve in matches and practice.

Finally, an appealing characteristic of the great players like Laver was that they played to win points, not to defend them. How refreshing to the spectator, compared to the ultra-boring type of modern tennis, where both players are behind the baseline trading endless identical topspin groundstrokes and hoping the other will eventually make a mistake.

The only thing done better on television these days are the instant replays of great points from a different camera angle, which I really like (although it can be overdone). Otherwise, in terms of player skills, tactics, behaviour, the pace and variety of the game and television presentation, there is nothing about today’s tennis which compares favourably with that of 40 years ago. There is no question in my mind that with his skill, athleticism and steely self-belief, Rod Laver would be the best in the world today, just as he was 42 years ago.

Roger Underwood is a retired forester, and a geriatric tennis player

An Empty Hijab Makes the Most Noise

In Russia, Paranoia And Penury