But now to the serious issue of the day: what do YOU think of the return of Greg Page as the Yellow Wiggle?

This story has been major breaking news over the past two days, as journalists across Australia grapple with the fact that the Wiggles’ carefully created veneer of jollity is actually just a stage show. Apparently the four don’t spend all their time driving round in a big red car, and the harder-hitting investigative news services are now questioning whether Jeff ever really was asleep.

In fact, it turns out that the four Wiggles are actually immensely clever multimillionaires. Who’d have thunk it? All they did was dance around, strangely dressed, and sing very repetitive lyrics in front of screaming audiences. They sell millions of recordings, have theme parks based on them and employ thousands of people. 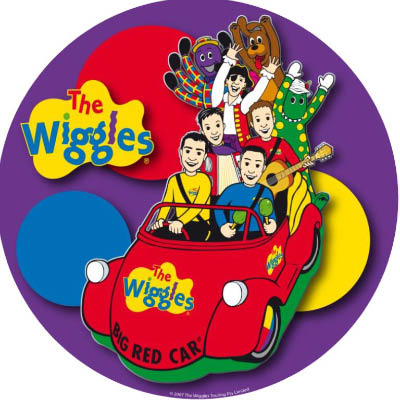 When Mick Jagger does this, no one bats an eyelid, but at the same time we don’t tend to read about Wiggles love-children, Wiggles controversial tattoos, Wiggles urinating outside nightclubs, and Wiggles in rehab.

For those of you who missed the backstory, Greg Page was the original Yellow Wiggle (he wore a yellow shirt; it wasn’t jaundice or anything). But Greg got sick with dysautonomia, and it’s taken him five years to have it diagnosed and now properly managed.

In Greg’s absence, Sam Moran was cast as the Yellow Wiggle – and depending on your point of view, either Greg or Sam is now playing the Anne Baxter role in All About Eve. One – or the other – is clearly shifty and conniving, but apparently not both of them. Sam certainly got given a heave-ho off the good ship Wiggle that Captain Feathersword would have been proud of.

Apparently last year the Wiggles raked in $28.2 million – they are one of Australia’s few really functional businesses. So yes, this really is serious news: given the state of the rest of the economy, we may be looking at a Wiggles-led recovery in 2012.