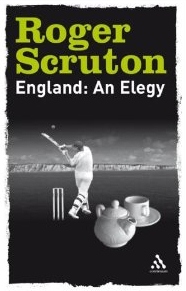 Roger Scruton’s England: An Elegy examines what it was that gave England its special enchantment and cast a unique spell over millions all over the world who had never been there.

Scruton looks back with sadness, because most of the things that made England great, if they remain now at all, exist only in diminishing remnants or cheap versions of the originals.

The book includes a portrait of one of Scruton’s schoolteachers, a quintessential Englishman who “showed why ‘repression’, which had become, thanks to the vulgarisers of Freud, a term of abuse, was really the name of our highest virtue, and the one on which all other virtues depend”.

The pre-eminent literary blogger Patrick Kurp describes John Williams’s Stoner (1960) as “one of the rare perfect novels”. Stoner tells the life of an obscure teacher of English at an obscure American university in the first half of the twentieth century, a man who devoted his life to teaching English despite the scheming of some of his colleagues, the neuroses of his wife and the indifference of most of his students. It is a story of dedication, endurance, patience and love; and it may indeed be a perfect novel.

Amongst this year’s DVDs  a pleasant surprise was Enid, a BBC telemovie on the life of Enid Blyton, whose phenomenally successful authorial life was counterbalanced by miserable failure as a human being. Helena Bonham Carter, on screen almost throughout, played the title role superbly, never completely forfeiting our sympathy despite Blyton’s often deplorable behaviour.

The find of my year though was not on DVD, nor is likely to be, but some philanthropic soul has somehow got his hands on it and uploaded it on YouTube: the BBC version of Tom Stoppard’s Professional Foul (1977) starring the incomparable Peter Barkworth as the dilettante philosophy don who, on a jaunt to communist Prague, learns by experience that philosophical ideas have consequences.

The first part is here:

The Joy of Submission

The View from Obama’s Ruins