Australia has 400 defence personnel applied to the desultory war against ISIL, with the US-led effort failing to foil ISIL taking fresh territory.  This has led to some angst about how effective our systems are against these fanatical irregular troops.  It turns out that they are not meant to be effective.  The New York Times has reported that US aircraft are not striking well-identified command posts.  Fear of civilian casualties is the excuse but the real reason may be that President Obama prefers hard-line Islamists over moderate ones – witness the US reaction to the overthrow of President Morsi.

Whatever the reason, Australia’s effort in Iraq is more of a training exercise than real war and our people there are safe from harm.  Our Wedgetail AWAC aircraft have been declared operational after being shaken down in a war theatre.  Training with allies is great but it is time to bring them home.  There is a parallel with World War 2 in which our 6th, 7th and 9th Divisions were serving in the Middle East at the time of the Japanese attack and were brought back to fight in the Pacific theatre.

China has now completed the 3,000 metre runway on Fiery Cross Reef in the Spratly Islands and their forts are likely to be at the fitting-out stage.  A couple of observers have now twigged to what the Chinese intent is with their nine-dash claim.  With respect to Vietnam, for instance, China intends to bottle up the Vietnamese Navy and fishing fleets to within 80 km of the Vietnamese coastline, which is 1,600 km long facing the South China Sea.  To paraphrase Orwell, the future that China is working towards is one in which they have their boot stamping on the Vietnamese face – for ever.  They are not just picking on the Vietnamese.  Everyone else will get the same treatment and Asia will become a much darker place with enormous resentment towards China.

To back off from this path would mean China losing face which is the point of the exercise in the first place.  Thus war is inevitable to avoid the dark future of Chinese domination of Asia on racial grounds.  It will be a race-based war in that China believes it should dominate Asia because of the innate superiority of its people and culture.  No matter what particular incident triggers the war when it comes, how will we all go in the matchup?

The man who predicted the modern age of industrial warfare was a Polish banker by the name of Jan Bloch in 1898.  His insights:

The continuing advances in weapons technology have reinforced all those factors, and that aids the defence.  Bloch calculated that the defence would have a fourfold advantage over the offence.  For China to prevail, they would have to be four times larger than the effort deployed against them.  How the matchup looks is shown by this graph of the protagonists’ GDPs in 2014: 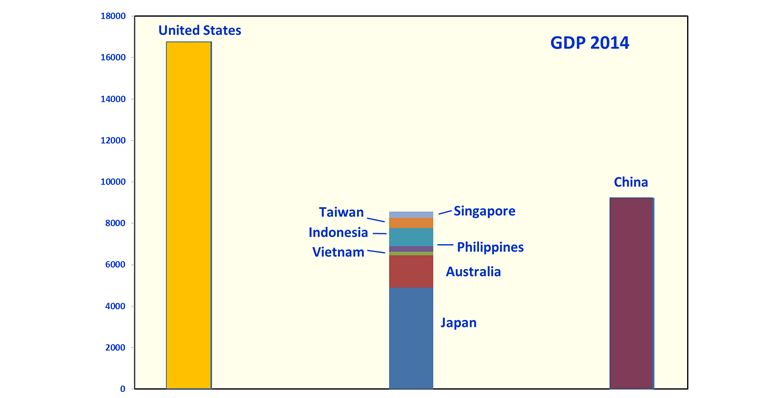 The countries east and south of China that will be the ones most affected by China’s irredentism have a combined GDP almost equal to that of China.  Australia and Japan together could hold off a Chinese attack and run a successful blockade, with or without US involvement.  China might be able to sink vessels and shoot down aircraft within a few hundred kilometres of the Chinese coast but by the same token they won’t be able to go anywhere either.  Chinese ships will be easily detected and sunk.  The one Chinese aircraft carrier will be sunk soon after it leaves port.  Indeed, it might not have to leave port to be sunk.

The South China Sea in particular will become a “kill box” for Chinese ships and aircraft because their positions will be known constantly from hundreds of kilometres away.  Vietnamese radars on the western side will hand contacts over to US radars on the eastern side with help from Australian AWACs.  With their positions known, it will just be a case of throwing enough ASCMs and BVR AAMs at them.  China is using a lot of reinforcing bar in their forts in the Spratly Islands and they will need it.  Ideally Australia should add to our JORN radar network with one based on the Broome Peninsular and one near Darwin.  These would aid target generation in the South China Sea.

The world will find that it can get by without Chinese goods and the blockade will spur a manufacturing boom in Mexico and many other places.  We do not make any profit from selling coal to China and soon we won’t be making a profit from selling them iron ore either.  There is not much else of consequence, so we won’t be missing out on anything.  The coming conflict is a test of Western Civilisation and we must not resile from it.  Neither should we fear it if, at least, Australian and Japan hold together.