Barbarians on the Thames

Excerpt from Theodore Dalrymple’s post-mortem of the British riots, published by City Journal. 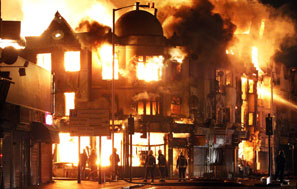 What Duggan’s friends and relatives said about him was highly revealing. Duggan’s girlfriend observed that if Duggan had had a gun and had seen the police, he would have run away. This is not exactly a paean to his peaceful and law-abiding way of life; she did not claim that it was unimaginable for him to have been carrying a gun. And if she knew that he might have been carrying a gun, she knew a lot more about him and his way of life than she was revealing. A sister said, yes, Mark was “involved in things,” but he was not violent. She delicately refrained from saying what those “things” were, but her way of putting it suggested that she was using a code that almost anybody of her milieu would be able to crack. A friend noted that she did not believe the original press reports, subsequently proved false, that Duggan had shot first at the police because “Mark is not so stupid to shoot at the police.” The word “stupid” implies only a prudential and not an ethical reason for Duggan’s behavior; presumably, there were others at whom it would not be stupid to shoot.

A sorry excuse for a Royal Commission

Not on same page