Until someone produces a better analysis than this one, the question of whether the media is biased well to the left is settled. The data are taken from the United States but the likelihood that the Australian media is made of different stuff is remote indeed.

The book is Left Turn: How Liberal Media Distorts the American Mind and is by Tim Groseclose who holds a joint appointment in the departments of economics and political science at UCLA. The book provides a layman’s version of the highly sophisticated analysis of the American media built on a number of peer reviewed articles in some of the highest ranked political and economic journals in the US.

Groseclose provides numerical metrics showing the political leanings of politicians, journalists and various media outlets taken as a whole. The politicians are found across the entire spectrum from left to right. The media are almost entirely on the left, and well to the left at that.

He used a number of statistical techniques to build his inferences. For politicians, the technique he used was to provide an estimate of political bias according to which side of various political questions each had come down on. 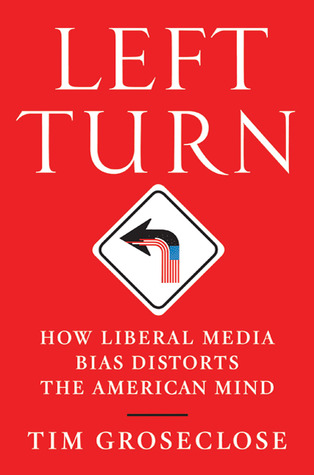 These were issues that showed a clear division between the Republicans and Democrats and were therefore reliable indicators of the nature of one’s political orientation. He used, for example, the positions taken by the Americans for Democratic Action (the ADA) as his standard of left liberal opinion and then gauged the political orientation of each individual member of the Senate and House in relation to how they had voted.

Similar techniques were used in determining media bias. Although most readers of the press are unaware of the biases of various think tanks, there are clear partisan differences that anyone who knows these organisations well are perfectly clear about. He then analysed the uses made of these various think tanks by different media outlets to determine how biased they were. A perfectly neutral media would be indifferent to the groups they sought information from, and would try to get the views of both. But with the biases inbuilt into the various media reporters, the assumption was that the more to the left they were, the more likely they were to use information supplied by the more leftist organisations. Vice versa for those who leaned to the right.

There is in fact much more to it than that. But what Groseclose emphasises is that his scholarly articles have appeared in the highest ranked journals such as the Quarterly Journal of Economics. They have therefore had the most rigorous reviews possible, and given the academic world you may be sure that a paper demonstrating the existence of a left bias in the media would be gone over as thoroughly as possible by each of the referees. But even beyond that, if there were some flaw in the analysis, there are huge number of academic status points to be earned by coming up with some kind of rebuttal. His articles have, however, attracted not even a rejoinder from any academic source, never mind one that would have been publishable at that level (unlike with the media and various bloggers who continually attempted to refute his views with criticisms Groseclose discusses in the book and easily turns aside).

What he does is calculate an actual numerical value for the bias shown. He determined political quotients (PQs) for individual politicians and slant quotients (SQs) for the media. The higher the number, the more to the left each media group or individual was. Using his techniques, he was even able to go back into history and provide estimates of the PQs for politicians of the past.

But what is possibly the most remarkable aspect of this study is the extent to which this bias makes a difference so far as political outcomes are concerned. His estimates show that the PQ for the entire adult American population at the present time is 50.4, virtually midway between totally to the left (at 100) and totally to the right (which would be a zero). This is due to net effect of all the influences on each individual including the biases of the media which surround them with their PQ at around 93. Using some very sophisticated econometric techniques, he estimates that were the media’s bias around 50 instead, the PQ of the country would move from around 50 to around half that number to something like 20-25. That is, the population of the United States would then have views on average far more conservative than the biases exhibited in the present day by Fox News!

This is a depressing book since it not only highlights what everyone knows, it makes thinking through to a solution almost impossible to imagine. There is no conceivable way that the media will shift from voting Democrat relative to Republican at a ratio of 93 to 7 and there is therefore no likelihood that we will find the population drifting towards the more conservative sets of beliefs which are the natural beliefs we almost certainly hold were the present media bias removed. There is, as far as I can see, no technique to effect the change and there is no means to alert most people to these facts. It is not even that the media lies, but that it selects – it is the way it chooses what to say and how to say what it says that keeps you informed mostly about what those on the left want you to hear and deprives you of the news that those on the right would like you to hear. There is no means to see past the media unless one wishes to make oneself an expert with an expert knowledge over all issues one is interested in. It obviously will not happen.

Let me therefore recommend this book at the highest level I can recommend any book. It will tell you what you already knew but will do so in a way that rebuts every attempt to dismiss these conclusions as untrue and unimportant. These are conclusions worth knowing, and the book is written in such a surprisingly engaging way, as irritating as the facts he presents are, it is a book that is entertaining to read in spite of all the maths that must be part of the story he tells.